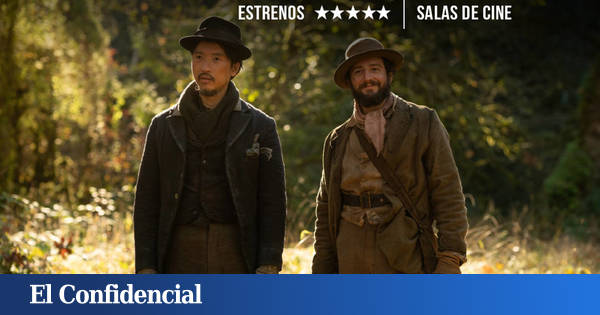 At the peak of ‘I will love you always’ (1954), by Roberto Rossellini, the protagonists, the Joyce (Ingrid bergman Y George sanders), attend the discovery of two figures live buried in Pompeii, which archaeologists recover by molding in plaster the hole that their fossilized bodies have left in the lava. For the character that Bergman embodies, contemplating this immortalized pair of lovers in an eternal embrace is the definitive inner shock that will lead him to confront the obvious crisis that his bourgeois marriage lives. At the start of ‘First Cow’, a walker with her dog also discovers, in this case by chance, two buried skeletons shallow in a forested area of ​​Oregon by the river. The film then goes on to tell us about their lives, those of two men just two centuries earlier in the not yet constituted state of Oregon. A territory, as one of them, King-Lu (Orion Lee), which History has not yet reached.

Lu accompanies his statement with the enthusiasm of a pioneer who hopes to build his dream there. Chinese emigrant fleeing a gang of Russians After killing one of them in a brawl, Lu befriends Cookie (John magaro), a shy cook who helps you out on your getaway. Both connect because they also have little to do with the rest of the men in the area, trappers in search of furs and opportunists with easy aggressiveness. The two men soon live together in Lu’s cabin, and from there they devise a plan to earn a living. Cookie will prepare fritters to sell at the nearby fort, where this type of treat is still in short supply. But to put the icing on his recipe, the cook needs milk. And there is only one cow (Evie) in the area. So Cookie and Lu organize to sneak into the owner’s ranch at night (Toby Jones) of the beef to be milked in secret. The fritters are a hit. And the alliance between Cookie, an artist of the kitchen, and Lu, who has the shaft of a merchant, seems destined for prosperity. Until the owner of the cow orders Cookie a dessert to impress his visitors, and things get complicated …

Few cinematographic contexts so conducive to the exclusive coexistence between men like the western. Traditionally, male relationships in this gender take place within the framework of an institution or group with its own internal codes of operation (the army, the cowboys, the gang of thugs …) or in an open space that does not give rise to confusion as to the nature of the link between the characters. In ‘First Cow’, however, Cookie and Lu begin a cohabitation from the beginning that is portrayed from the privacy of a precarious home. But Kelly reichardt it does not pretend to make explicit the latent homoerotic rebellions in the western world. But to rethink the type of relationship between the protagonists from a perspective away from the classic masculinity around which the American genre par excellence has risen.

Cookie and King distance themselves from aggressive, predatory and individualistic dynamics from the rest of the guys who move around, and in general from the usual (anti) heroes of the genre. Also in its relationship with the environment, which marks the scale with which the director resizes her western. Already at the beginning of the ‘flashback’, we are introduced to Cookie collecting chanterelles in the forest. Reichardt shoots it in closed shots, so that the small details of nature take on an unprecedented role in a genre that is defined precisely by the opposite proportion, that of large landscapes framed in a general shot. At one point, we see a belly-up salamander next to a fallen leaf of the same color. The protagonist stops to turn him over so he can stay alive. When you clandestinely milk the cow, you will do so while dedicating kind words to the animal.

Kelly Reichard had already reviewed the western from a gender perspective that subverted traditional routines in terms of leadership in ‘Meek’s Cutoff’ (2010). That film, in which the characters seemed at times trapped in a vacuum in the middle of their journey through Oregon, was fully indebted to a modern cinema with European roots. But in ‘Fist Cow’, the rethinking of the foundations of the western also represents a turn from revisions forged from critical harshness or analytical deconstruction. This eIt is a film brimming with life, which focuses on the link between man and the territory from the perspective of care, responsibility, delicacy and collaboration. In a certain way, it connects with other recent films such as ‘The Sisters Brothers’ (2018), by Jacques Audiard, where the possibility of another model of American society is also outlined from a parenthesis of utopian brotherhood between the four main characters. Or as ‘Nomadland’ (2020) by Chloe Zhao, which basically also claims another way of connecting with the landscape that has little to do with the idea of ​​conquest, settlement and privatization of the “founding” settlers of the country.

‘First Cow’ is therefore situated at the antipodes of the western understood as an epic story, loaded with violence, led by a concrete prototype of a male hero and legitimator of the depredation and privatization of a territory. His quasi-anecdotal argument, about the importance of having a little milk, but not having access to its source of production, encapsulates a timely speech on the construction of capitalism and the damages of private property. Kelly Reichard reconstructs with a naturalism faithful to historical rigor and always attentive to details this little great alternative history of the West whose human traces, like those of the lovers of Pompeii in Rossellini’s film, end up becoming visible in our present.