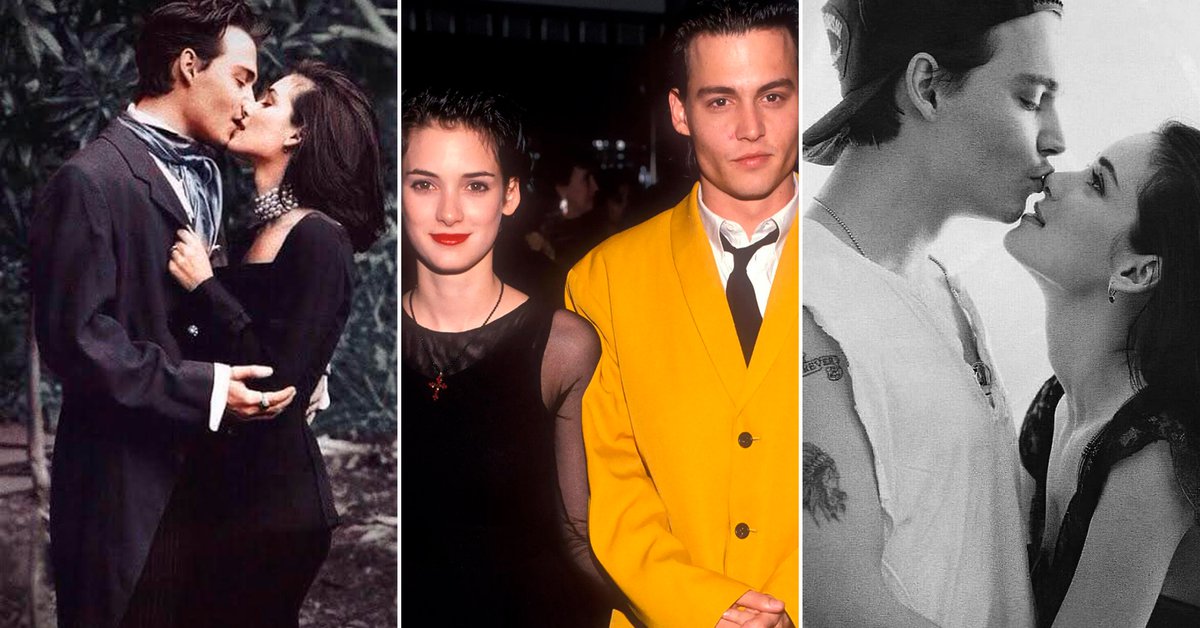 The story ended with a burning room and a tattoo that had to be rewritten. They were one of the most iconic couples of the nineties, they seemed to understand each other like few human beings do and the love they felt for each other led them to love each other. swear eternal love.

But the charm was broken and the couple decided to go their separate ways. Johnny Depp, who was 27 at the time, lost a part of himself, according to people who knew him at the time. AND Winona RyderAt the age of 18, she was never as close to the altar as she was with her first love.

A little over two decades later, its story continues to draw sighs from the most romantic. And, although they did not end up together, the famous actors lived in their own flesh one of the most exciting stories from Hollywood.

Depp and Ryder met in mid-1989, during a premiere that took place in June of that year. Photos: @mundofilmico

When Depp and Ryder met they were already rising stars. The Minnesota-born, San Francisco-raised actress had already built up some fame for her appearance in the movie. Beetlejuice and for his work on the 1988 film, Las Heathers, also known under the title School of young killers.

For his part, Depp was preparing to star in the musical film directed by John Waters, Cry-Baby. A kind of parody of some musicals aimed at teenage audiences during the 50s and that Johnny would have chosen to make fun of the hysteria that his work on the television show caused 21 Jump Street, as he later confessed.

In the love arena, the Kentucky native had already racked up some losses. When I was just 20 years old got married with his first wife, Lori Anne Allison, whom he divorced as soon as they arrived in Hollywood. Then he got engaged to the actress Sherilyn Fenn and the actress Jennifer GreyHowever, with neither of them the relationship prospered.

After five months of its official introduction, the couple got engaged. This being the second time that Depp would arrive at the altar and the first and last time that Ryder would have plans to do so (not taking into account the “accident” with Keanu Reeves). Photo: @ la8mediterraneo

But with Winona it was different. From the beginning, the actress, who until now had not been involved in any serious relationship, seemed to change everything in his life … and he in his. It was a movie moment, according to Johnny during an interview he gave to the magazine Rolling Stone in early 1991.

The first time they saw each other was in 1989, during the premiere of the film. Great balls of fire! where Ryder acted. The two exchanged glances: she was having a cola, she told the American magazine, and he experienced what he later described as “a classic look.”

“As the zoom of West Side Story, everything else is blurryDepp said. “It was not a very long moment, but it was suspended“Added Winona, who was about to turn 19 when the crush happened. At that moment, the actor knew that he wanted to unite his life with her; although life had other plans.

An engagement and a tattoo: the pinnacle of love

During their relationship, Ryder wore the engagement ring with her. Photos: @ImagenRetro

The couple officially met a few weeks after that premiere thanks to a mutual friend who introduced them. In the beginning, Winona was somewhat suspicious of Depp’s character.Well, Hollywood hotties are constantly rude and I believed that this would not be the exception.

However, Johnny was different and was extremely shy around her. That got her. What’s more, they both shared some literary and musical tastes, especially by American author JD Salinger and the soundtrack of the 1986 film starring Robert De Niro, The mission.

After that, it was all uphill for the couple. There was a first date, Winona’s family completely accepted Johnny and five months later, at the end of 1989, they were engaged and decided to move in together. First in New York and then in Beverly Hills.

In December 1990 the movie “The young scissorhands” was released, where Depp played “Edward” and Winona played “Kim Boggs” Photos: @ImagenRetro

During this time, they won the love of the public when they starred in the film The young scissorhands, where they played an extremely eccentric couple. Throughout the recordings, the love and admiration they felt for each other grew and that affection transcended to the screen.

About how he felt at the time, Johnny expressed to Rolling Stone: “There has been nothing in my 27 years that compares to the feeling I have with Winona. It’s like this strange atom bound, or something like that. You may think that something is real, but it is different when you feel it ”.

“The truth is something very powerful, now I know. This ‘Winona Forever’ tattoo is not something I take lightly … Your eyes kill me”. Back then, Depp decided to get his fiancée’s name tattooed on his arm, with the best of intentions that it would last forever.

The ink piece caught Winona by surprise, who admitted that she couldn’t stop looking at her name written on the actor’s skin: “It’s something very important because it’s so permanent! ”He thought about the tattoo back then.

However, happiness would not last forever. In 1993, just over three years after getting engaged, the couple ended their relationship.

An amendment and a lit cigarette: the end

Winona’s youth and pressure from the press and fans are credited with breaking up the couple. Photo: @ la8mediterraneo

Although different versions have emerged about the reasons that led them to end their relationship, including Winona’s youth, Johnny admitted that the media and fans influenced the outcome of their relationship.

In an interview with Los Angeles Times, Depp stated that “It is very difficult to have a personal life in this city. In my relationship with Winona it was my mistake to be as open as we were. I thought if we were honest we would destroy the monster of curiosity. Instead, we feed it. We gave people permission to feel like they were part of it. “

The couple eventually broke up, but the breakup was not easy. In the early nineties, Winona fell into a severe depression that put her in danger. As he recalled during an interview with the BBCAt that time he had a brief conflict with the consumption of tobacco and alcohol. And during your stay in a hotel, fell asleep with a lit cigarette.

In an interview with the BBC in 1999, Winona admitted that during her youth she “hit rock bottom” due to alcohol consumption. (AP)

That It caused the room to catch on fire in the hotel room. Although she was unharmed, Ryder considered this her “calling” to get away from those substances. Episode that later served him to work on the production of the film in which he starred alongside Angelina Jolie, Interrupted innocence.

About the tattoo, Depp had no choice but to amend it. He erased the “n” and the “a” from the actress’s name. On the arm was written “Wine forever” (drunk forever). Putting a completely comical twist on what once meant a promise of love.

Although not even with that amendment was he the same again. At least, that’s what Tim Burton noted, who after the breakup and after Johnny started a relationship with Kate Moss, opined: “It’s not the same as with Winona. It felt strange to be with him, as if he was no longer Johnny. It’s almost like Winona has taken her soul, her love”.

“Paul McCartney is dead”: a discussion, an accident and a magazine cover to disprove the most viral fake news in rock history
Sex, crime and mystery: 5 star deaths that continue to intrigue Hollywood
Hollywood stars who were about to quit acting tired of rejections and minor roles