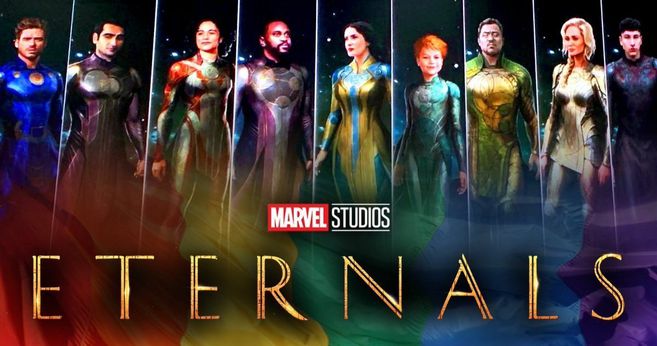 Audiences will meet an epic and diverse team of ten new superheroes who are inspired by Jack Kirby’s original Eternals, published by Marvel Comics in 1975.

November 4 hits theaters Eternals, the long-awaited new movie from Marvel Studios that revolves around a group of Super Heroes from space who have protected Earth since the dawn of humanity. When monstrous creatures called Deviants, believed to be lost to history, mysteriously return, the Eternals are forced to meet again to defend the world once more.

On Eternals, Audiences will meet an epic and diverse team of ten new Super Heroes who are inspired by Jack Kirby’s original Eternals, published by Marvel Comics in 1975. With different characteristics, abilities and storylines, and never before seen on screen, the Eternals arrived. to the Marvel Cinematic Universe (MCU) to stay. “While continuing the tradition of the MCU, the film breaks new ground and is a forerunner of what the future holds for the MCU.”Says Kevin Feige, producer of Eternals. Advance ticket sales for the film are now available.

A team enhanced in its diversity

In this sense, Nate Moore, co-producer of the film with Feige, points out that the story has special relevance for today’s global society. “We are beginning to address what is our relationship with this Earth and what is our relationship with each other. That is an important topic to explore because the fun is there. And the action will be there. Thematically, that’s the kind of storytelling that I think audiences want, because those are the things we deal with on a day-to-day basis.”, Comments Moore.

Thus, the film highlights the value of diversity and complementarity as qualities empower the Eternals to save the Earth. These thinkers and fighters share the same cosmic energy, but it manifests itself in different powers within each individual. When they work as a team, these powers complement each other.

The diversity on the team is reflected in the extraordinary cast that brings it to life. The actors and actresses who play the Eternals have multiple nationalities, ages and ethnicities. The film even features the MCU’s first Deaf Superhero: Makkari. Actress Lauren Ridloff, who plays Makkari, is excited to bring a Deaf person’s story to the screen and the impact it will have on that audience. “I think the most important thing about having a Deaf Superhero is that it reveals that there is so much more to each individual, beyond their abilities, strengths, or weaknesses. I’m happy that there is a Deaf character making a contribution to a story within the MCU”Says Ridloff.

Here they are, these are the ten Eternals willing to save humanity.

With morale as the north, Ikaris is the most powerful tactical leader and Eternal. He is caring, charismatic, and has the power of a unique force. In addition, it has the ability to fly and project rays of intense cosmic energy with its eyes. Faced with the threatening return of the Deviants, he is in charge of reuniting the ten Eternals, scattered throughout the world. Ikaris is played by Scottish actor Richard Madden.

Sersi’s enormous affinity for humanity makes her just as comfortable in her role as curator of the Natural History Museum in London and saving humans from danger from the Deviants. Sersi has the ability to manipulate matter, changing the composition of any non-sensitive material it touches. When it comes to recruiting the Eternals again, he doesn’t hesitate to help Ikaris. British actress Gemma Chan brings Sersi to life in the film.

Sprite looks like a 12-year-old girl and feels great sadness that humanity has treated her as little for centuries. He has the ability to create very realistic illusions, and he is much stronger and smarter than he appears. In the film, the American actress Lia McHugh to see a Sprite.

When it comes to recruiting the Eternals, Kingo is a famous and stylish Bollywood star who enjoys his life of fame and wealth. It has the power to emit projectiles of cosmic energy from its hands. Kingo is played by Pakistani-American actor Kumail Nanjiani.

Thena is a fierce warrior whose natural environment is the battlefield. Despite being somewhat sullen and distant, she shares a thousand-year-old friendship with Gilgamesh. Their skill? Use cosmic energy to shape any handgun you can think of. The renowned actress Angelina Jolie and vida in Thena.

The recruitment of the Eternals finds Gilgamesh in exile with his friend Thena, after a series of events that force both to distance themselves from the rest of the group. Cheerful, good-natured and very strong, he has become legendary for his fights with the Deviants throughout history. It is capable of projecting a powerful cosmic energy exoskeleton. South Korean-American actor Ma Dong-Seok, also know as Don Lee, plays Gilgamesh.

Druig is the most enigmatic of the Eternals. His aloof nature makes you constantly doubt your position as friend or foe. Throughout his existence, he has withdrawn from the other Eternals because he disagrees about how they have interacted with humanity over the centuries. He can use cosmic energy to control the minds of humans. Irish actor Barry Keoghan plays Druig.

Phastos is the Eternal Tech Expert, and from the shadows, he has helped propel humanity with his extraordinary knowledge. With the power of invention, this genius is capable of creating any object from raw material that is available to him. American actor Brian Tyree Henry from life to Phastos.

Ajak is the matriarch of the Eternals. As their spiritual leader, he wisely guides them since their landing on Earth to defend humanity from the Deviants. It has the power of healing, both in humans and in the Eternals, and is the only one that has the ability to communicate with the Celestials, cosmic beings of incredible power who work with the Eternals to protect the universe. The renowned Mexican actress Salma Hayek interpreta a Ajax.

Thanks to his power of cosmic superspeed, Makkari traveled every corner of the Earth and has an exhaustive knowledge of the planet of humans. This information is very useful for the Eternals in their mission to save the Earth. Makkari, however, dreams of continuing to explore beyond Earth to find new planets where the Eternals can live. American actress Lauren Ridloff embodies Makkari.

“Eternals”: These are the ten superheroes that make up the group