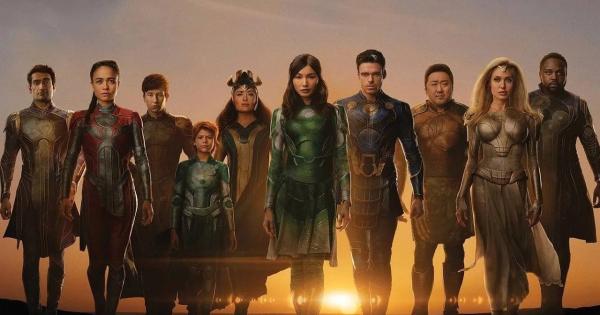 Eternals It has become one of the most anticipated films of 2021 and fans are already proving it with the massive purchase of tickets. The new tape by Chloe Zhao has a great chance of becoming the highest grossing of the year, even more than Black Widow – 87% and Shang-Chi and the legend of the ten rings –

95%, titles that it has already surpassed in the pre-sale of tickets with only 24 hours of availability. In the following paragraphs we discuss all the details.

Do not miss: Eternals: Chloé Zhao was inspired by Interstellar and The Tree of Life for the film

After a 2020 without products, Marvel Studios returned this year with a good load of series and movies that have become the most seen and commented on the networks. It all started in January with the launch of WandaVision –

95% on Disney Plus, following him Falcon and the Winter Soldier –

84% In July the adventures for the big screen began with Black Widow and shortly after with Shang-Chi. But not even the previous two were able to be as successful in pre-selling tickets as Eternals.

According to a new report from Deadline, Eternals It has already raised US $ 2.6 million in the United States alone, all thanks to the pre-sale of tickets in that country. It stands out for exceeding US $ 1.4 million Shang-Chi and the US $ 2 million Black Widow in the same stage, exceeding 86% and 30%, respectively. It’s clear that Marvel Studios fans have well-established priorities when it comes to viewing the company’s films; Now that the global health crisis has lost potential, theaters are filling up again as before and Hollywood has the opportunity to raise huge numbers with its productions.

We invite you to read: Daniel Craig could play a Marvel Studios villain

Marvel Studios has been in charge of injecting millions into advertising for Eternals. We are seeing trailers and previews everywhere that inspire fans to buy tickets. The film will tell the story of a race of immortal beings that lived on Earth shaping its history and its civilizations; This production draws the attention of the public not only because of the epic images seen in trailers, but also because it is probably the most diverse film in the studio, with a cast and a staff where inclusion and representation are the order of the day. Marvel Studios has become a bastion of diversity in Hollywood and audiences are fascinated.

Eternals has already exceeded the pre-sale numbers of Shang-Chi and Black WidowWill it be able to sweep the box office and leave them behind during the first weeks on the billboard? There are high chances that this is the case. On the other hand, you are less likely to be able to be more successful than Spider-Man: No Way Home, the next Spider-Man movie that will surely hit theaters to become the hit of the year, all thanks to the abundant rumors about the return of the other Spider-Men developed by Sony in the past.

The events at the end of Loki, that is, the opening of the multiverse and the creation of alternate realities from the main one, will be fundamental for the development of the following years in the Marvel Cinematic Universe. Things will get really interesting for the characters in the saga, especially with the appearance of a powerful new villain who will turn the multi-realities upside down, what other new characters will arrive? It was recently confirmed that the Eddie Brock of Venom: Carnage Released – 45%, it is part of the MCU, so anything could happen. Fingers crossed for some completely unexpected surprises.

You may also be interested in: Rumor: Marvel Studios would be planning the arrival of Elektra to the MCU