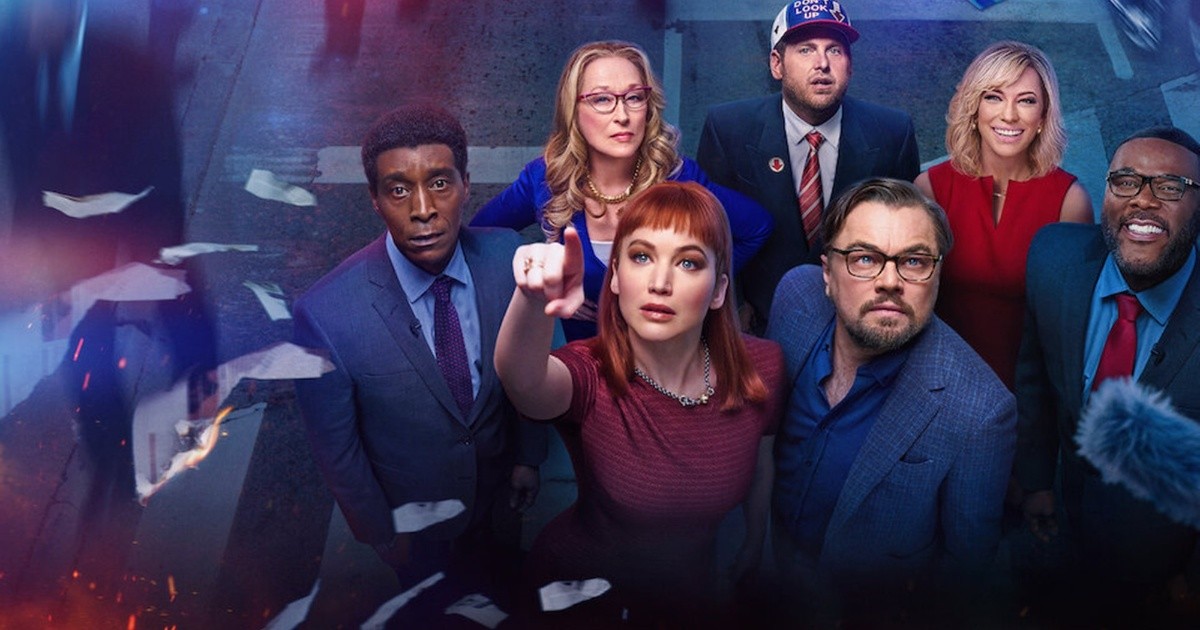 The doctor Kate Dibiasky he sits at his post with the parsimony typical of the work routine. With music and coffee through, he reviews some data, moves on to something else, until he takes a look through the telescope. What he discovers becomes a cause for celebration for his colleagues, colleagues, scholarship holders and even for the astronomer, professor, head of that department and Dr. Randall Mindy (Leonardo Dicaprio), who after reviewing some coordinates, reaches a not at all encouraging conclusion: with the fall of that comet, the entire planet will be destroyed in 6 months, 14 days.

Faced with this catastrophic panorama, the pair of scientists – ignored by dozens of authorities – manages to reach NASA, obtain the consensus of their colleagues, and get to have a meeting with the president of the United States, a frivolous and suggestively Republican Janie. Orlean (performed with the charisma of Meryl Streep), along with his son Jason (Jonah Hill) occupying a high political position. Meeting in which the government dismisses the matter and sends them to “wait and analyze.”

Desperate, Dibiasky and Mindy set out to initiate an urgent media action to spread the news to the world, but looking for them to open their eyes will not be an easy or free task.

This it is “Don’t look up” (“Don’t look up”) the director’s new film Adam McKay (“The big bet”, “The vice president”) who through his personal good acid humor gets involved with very contemporary issues but taken to the extreme: such as the extinction of the planet, the value of science, and the advancement of companies of cell phones capable of controlling the world’s databases. The result: a science fiction satire that, no matter how crazy it sounds, is in the same way credible and even identifiable in these times.

Let’s expand on this a bit. For a long time the planet has been giving warning signs, even DiCaprio himself is one of the most committed actors about problems and sustainable actions.

On the other hand, the richest and most powerful people in the world are only those who possess the greatest amount of our information: Elon Musk, Jeff Bezos, Bill Gates, And till Mark Zuckerberg. And not coincidentally, the first was one of those who was already exploring space travel, which connects very well with the end of the film.

Now, the film delves into this question: what do you feel if you find out that your world ends in six months? And the development of this question is quite realistic, being one of the strongest points of fiction: it is excellent how the government and then the media deny space to the news, to the point that the most important thing that week was the separation between two artists (played by Ariana Grande, The film’s furore appearance, and Kid Cudi) Any similarity to the WandaGate is purely coincidental.

A bright and this time redhead Jennifer Lawrence – Oscar winner – plays the astronomer Dibiasky, whose name gives the comet. A character that sheds female stereotypes to make use of her knowledge, being frontal, forceful and forming an extremely interesting pair with the touch of an always intense DiCaprio, each time she undertakes a new role.

The also winner of the Hollywood Academy Award, achieves a not only psychic transformation of his character, who we see evolve throughout the film – from the opening scenes in which he is out of breath every time he wants to talk about the comet. , until he became the most consulted scientist in the government and the media – but also physics, a true success that once again confirms that DiCaprio is not only a pretty face of the industry but an actor with his own strength that turns every time he the clapperboard marks the start of the action.

With moments that recall the outbreak of the pandemic – due to the initial denial and the recurrent appearance of scientists on television programs – with the present political tint – which in the film is located at an electoral time, an issue that in Argentina in a certain way touches closely-, with a cast that is (along with “Dune”) of the largest of the year, and with issues that are urgent to analyze but not wait, “Do not look up” explodes like a comet on Netflix, the most preponderant platform in the market.

The title of the film is just as interesting. Although science in almost all of its cases rejects religion, both are a theme in history, relating them in that “believing in something.” Precisely the beliefs are a subject up for debate in the plot: it is in the government to believe in astronomers, and astronomers in their data, and viewers in information. At the same time, faced with an episode as alarming as the end of the world as we know it, we always want something to hold on to, and that is where faith comes in. Even in looking for answers in heaven.

“Don’t Look Up” It is a realistic satire that comes with the advance of a new coronavirus variable, and that challenges us to question where they want us to look and where we are looking.

Don’t Look Up “: Leonardo DiCaprio and Jennifer Lawrence in a witty sour parody to get our eyes wide open