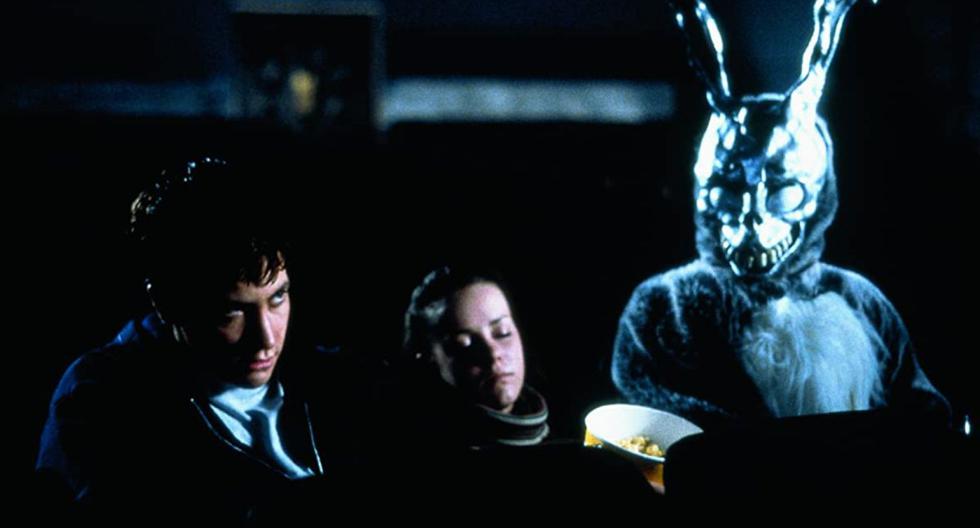 A strange and dark parable with a demonic rabbit – gray instead of white-, mysteries, time travel, youthful alienation, psychological problems and a lot of black humor. That’s it “Donnie Darko”, The director-screenwriter Richard Kelly’s debut feature (“ Southland Tales ”) that sparked off the career of the now seemingly ubiquitous Jake Gyllenhaal.

SIGHT: Winona Ryder turns 50: the rise, fall and resurgence of a ’90s icon

This week the film celebrated its 20th anniversary in theaters – it was on October 26 – and the film remains so relevant two decades later, with rumors of its possible return to the big screen and even an appearance of its iconic rabbit Frank. in the popular online game “Call of Duty: Warzone”, the latter a strange but interesting indicator of the relevance of a character or franchise in pop culture. On such a festive occasion, we revisit the film and try to answer why it remains so popular despite the years.

But first things first, explain what it is “Donnie Darko”, A more complicated company than it seems at first glance and for which I invite the reader to experience the film on their own, which is currently on Amazon Prime Video. Described as a psychological thriller, the film stars the headline Donnie (Jake Gyllenhaal), a teenager living in a typical American suburb in the late 1980s.

Despite his peaceful life, Donnie’s existence is not easy, as he has recently been suffering from psychological problems that have been triggering sleepwalking episodes. These problems have increased since he met Frank, a mysterious man dressed in a terrifying rabbit costume that only he can see and who announces that the world will end in 28 days.

And to complete his problems, an airplane engine fell on his bedroom, an event that could take his life if he had not been found elsewhere at that time. All in all, it’s a strange start for Donnie and the situation is about to get worse.

LOOK | “Halloween”: 10 horror movies that you may not know but will make you tremble with fear | VIDEOS

As revealed by Kelly a The Guardian en 2016, the idea of ​​”Donnie Darko” came to him after hearing the story of how a piece of ice that fell from an airplane landed in a child’s room and how he was saved from a fatal accident.

To that root of a story Kelly added autobiographical elements: the locality in which all the events occur are based on the city of Midlothian in Virginia, where the director grew up, while people like Grandmother Death (Patience Cleveland) were based on a person he knew.

His chronological situation, at the end of President Ronald Reagan’s term in 1988, was also a period in which Kelly grew up, although he is younger than a teenager like Donnie.

Kelly, who was 23 when he began writing the story and 25 when he began filming it after raising a $ 4.5 million budget. Jake Gyllenhaal, then only known for the movie “October Sky” (1999), was the second choice for the leading role, after Jason Schwartzman was left out due to previous commitments. On one occasion where fiction mimics reality, her sister Maggie Gyllenhaal landed the role of Elizabeth, Donnie’s sister. The cast was not filled with complete strangers, with veteran actors Drew Barrymore and Patrick Swayze in relatively prominent roles.

LOOK | Halloween: top 20 of the best movies to stream this October 31

But these were not enough to overcome the strange nature of the film, which found it difficult to find a distributor after its premiere at the Sundance Film Festival in January 2001. In the end it was the contribution of Christopher Nolan, who one year earlier he released the equally bizarre movie “Memento,” which convinced Newmarket Films to go for the film, a decision they probably came to regret when the film failed at the box office when it was released on Halloween weekend of the same year.

There are quite a few reasons for this failure, since the film had against it not only a complicated premise and a lack of known protagonists, but also involved in his argument accidents caused by airplanes only months after the terrorist attack of September 11, traumatic event for Americans.

And if this had continued like this, “Donnie Darko” would have been forgotten, if it weren’t for finding a new international audience.

“The movie took a long time to be found. It started in the UK“Recalled Jake Gyllenhaal in dialogue with The Guardian. “I had just finished a play in London and started doing press for ‘Donnie Darko’. The answer was very different from my country: The British seem to appreciate that if you have something special, it doesn’t have to be perfect. They acted like they found a kindred spirit.”

This recognition in foreign markets, as well as its release on DVD a year later, breathed new life into the film, which soon gained cult status. A sample of its new popularity was the release of a version of the director in May 2004, which adds 20 minutes to the film and explains more fully the mysteries of the story, although to the detriment of it some of its fans.

Meanwhile, a sequel titled “S. Darko ”premiered in 2009 focusing on Donnie’s younger sister, again played by Daveigh Chase. However, the lack of intervention by Richard Kelly and most of the original cast, as well as the critical reception of critics, have led fans of this franchise to prefer to pretend it does not exist. What if you look with more interest is another continuation proposed by Kelly himself in 2017, which we could hear news soon.

“I hope we soon have something to show people that really blows everyone away,” said Kelly. to NME on October 26. “I hope to expand this universe”.

“There is nothing written about tastes” goes the old saying, and movies are no exception. However, what if there is a consensus and, from what is emerging, “Donnie Darko” is considered a very good film, with an enviable 87% of ‘freshness’ (positive opinions of experts) on the Rotten Tomatoes site, quite an achievement for the debut film by a novice director.

However, many good films are frequently forgotten: one does not have to go any further than to remember (perhaps with effort) “The Artist”, a film that won five Oscars in 2012, but which is almost not talked about anymore. the actuality.

LOOK | Halloween: top 20 of the best movies to stream this October 31

So the films that last are those that touch a deeper aspect of their audiences, beyond their superficial traits such as their genre and their actors. Deep down, although “Donnie Darko” is set at a precise moment in history – October 1988 – his experience as a teenager resonates with audiences today. This is how Kelly himself thinks.

“The fact that the film continues to resonate with contemporary teens, to me, is a reminder that the more things change, the more they stay the same, ”Indicative Kelly in dialogue with Quartz. “These things that teenagers have to deal with, these painful things that they deal with – a boy who becomes a man and a girl who becomes a woman – these thresholds of adolescence, they are never going to go away.”

Of similar opinion is that of its star, Jake Gyllenhaal, who recalled how the script for “Donnie Darko” captivated him when he first read it. “He beautifully captured the experience of becoming an adult: the world that felt so solid becomes mobile and liquid. I thought, ‘This is what my teens felt like’ even though I never speak to rabbits and have never spoken”.

LOOK | “Halloween”: who was the real Michael Myers? The true story that inspired the movie about the killer psychopath

Today in a world more strange and uncertain due to global events, perhaps more audiences feel identified with the uncertainty that tormented Donnie, giving life to the film for five, ten or twenty more years.

“Donnie Darko” 20 Years Since Its Release: Why Did This Movie Captivate A Generation?