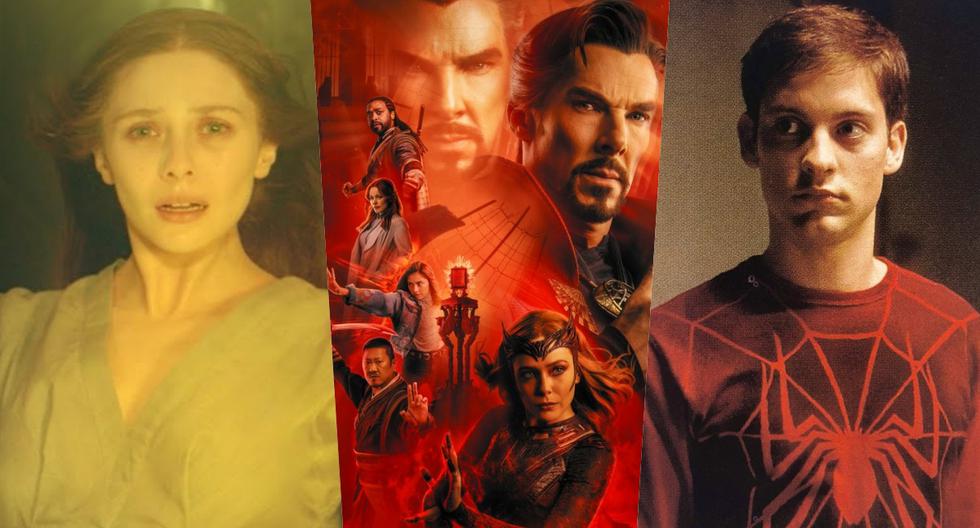 Next May 5 (in Latin America) it opens in theaters “Doctor Strange and the Multiverse of Madness”, the long-awaited film Marvel and the second solo of the character played by benedict cumberbatch Y ,in addition, the fifth of the so-called “phase four” of the MCU.

One of the great attractions of this new installment is the appearance of the Scarlet Witch as the great villain of the story, in addition to the expectation generated by the use of the multiverse and the possible parallel realities that are unleashed from it. Something that we started seeing in the acclaimed “Spider-Man: No Way Home”, released in December 2021.

If you are one of those who are looking forward to this movie but the information behind it has you a bit confused, this article is for you. Next, all the data you need to know about “Doctor Strange and the Multiverse of Madness” and the marvelian universe that revolves around it.

Let’s start by reading what the synopsis tells us: “In”Doctor Strange and the Multiverse of Madness”, the MCU unlocks the Multiverse and pushes its boundaries further than ever before. He journeys into the unknown with Doctor Strange, who, with the help of mystical allies old and new, traverses the mind-boggling and dangerous alternate realities to face a mysterious new adversary.”

The plot of “Doctor Strange and the Multiverse of Madness” takes place after the events seen in “Spider-Man: No Way Home”, so it is important that you watch this movie if you haven’t already.

What happened in “Spider-Man: No Way Home”? Without any intention of spoiling you, it must be said that it was in this film that the opening of the multiverse began, from which now, in “Doctor Strange and the Multiverse of Madness”We will see its consequences.

Let us remember that Peter Parker, concerned that his identity has been revealed to the world, asks Doctor Strange to alter reality so that everyone forgets his great secret. He agrees but while they are doing the spell, something goes out of control and what would be a “simple change” generates an alteration in the parallel realities. It is for this reason that we see characters like Electro, Doctor Octopus; Green Goblin; Sandman (man of sand) and the Lizard as well as the expected Spiderman of Tobey Maguire and Andrew Garfield.

What the trailer revealed

Let’s go back to the present and see what the trailer for “Doctor Strange and the Multiverse of Madness”.

In these previews, because there are several, we saw that in addition to WandaVision, Professor Charles Xavier, founder and leader of the X-Men, will appear in this sequel and will be played by the remembered Patrick Stewart, the same actor who gave this character in the Marvel saga in the early 2000s.

About this participation, Stewart has commented to the portal comicbook.com the next: “People have imitated my voice since I walked on stage 60 years ago. So I can’t be held responsible for it. NI don’t look at social networks a lot, mostly for a matter of time, but I have to say that before I went to bed on Sunday night I had a lot of messages from friends and some people I barely knew saying: ‘ah! It’s you?’. Well of course they knew I was home waiting to watch football so how could it have been me? We’ll have to wait and see”.

According to the trailer, the Doc Strange 2 He will appear before a kind of court presided over by the so-called Professor X to answer about the consequences that the alteration of reality has unleashed.

Last March, Empire confirmed the rumors of the Illuminati in the Marvel Universe with a photo of the Doctor Strange in said court.

What follows in the trailer is to see Wanda destroying this cell that Strange is in to end not only him but everything in his path. But that’s not all, we also see the Scarlet Witch doing a kind of ritual and in the middle of this, her two children appear briefly. If you saw”WandaVision”, you will remember that all the family life of this character never existed but that she recreated it in a parallel reality.

It is said that these children would exist but in another reality and that Wanda could be trying to connect with her other parallel self. That would confirm because in the happy advance we see the character played by Elizabeth Olsen in different stages, a good one and a bad one.

But we must not forget the protagonist of this story and what will happen to him in this sequel. Yes, it is a dark version of Doctor Strange and a zombie.

What new characters will we see in this sequel?

America Chavez (Xochitl Gomez) is a comic book character of Puerto Rican origin whose power is to travel in the multiverse. He is part of the Young Avengers and lives in the so-called Utopian Parallel, a dimension out of time where a being known as the Demiurge lives, an entity that was born thanks to the force of creation and what gives him that power that includes, in addition to move through the multiverse, fly and be bullet resistant.

“She adds an exciting spirit of youth, she is a newcomer to her powers and to our world. In fact, she comes from another universe. I think she brings a sense of lightness and youth”, he declared about this character sam raimimovie director, film director.

Other characters that are confirmed, according to what the official poster of the film shows us, would be: Captain Carter, Karl Mordo, Christine Palmer, Wong, Captain Marvel.

Keep in mind that many of the characters that we will see in “Doctor Strange and the Multiverse of Madness” they will be variants of the originals due to the presence of the multiverse. Thus, it is said that the “new faces” would be:

the spiderman of Tobey Maguirethe Iron Man of Tom Cruise (a rumor that has not stopped for a long time) who would also be a member of the aforementioned illuminati, the Hombre de Hierro from Robert Downey Jr., Ioan Gruffudd as Mr. Fantastic, Eric Bana’s Hulk, Edward Norton’s Hulk, and here we stop because this is getting out of control.

What movies to see before?

If you want to complete the homework before the premiere of “Doctor Strange and the Multiverse of Madness” We recommend below the list of Marvel movies that you must see before the long-awaited sequel. Take note of the list!

sam raimiremembered for directing Tobey Maguire’s Spiderman trilogy, is the director of “Doctor Strange and the Multiverse of Madness.”

In an interview to AMC Theaterspublished on April 6, the filmmaker talked about his return to Marvel Studios after 15 years.

“At the same time, I had to become aware of the lore of the Avengers and where the Marvel Universe was right now. Where was Wong’s character? What was the state of the universe after Thanos?he claimed.

The film will be released in the United States on May 6.

“Doctor Strange and the Multiverse of Madness”: all about the new Marvel movie