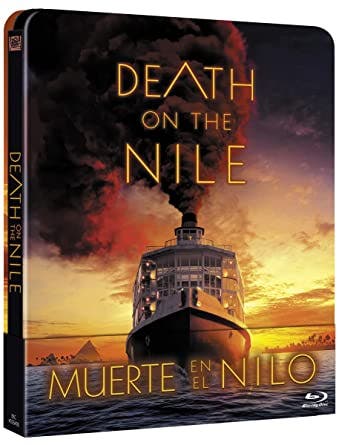 We analyze in cinemascomics the Blu-Ray of Death on the Nile, in its special edition in metal box, the new adaptation directed by Kenneth Branagh

In Cinemascomics we have analyzed the domestic edition in Blu Ray Steelbook from death on the nilefilm based on the novel of the same name, written in 1937 by the legendary crime and mystery writer Agatha Christie.

death on the nile is already on sale in stores Steelbook Blu-Ray, Blu-Ray box amaray, DVD and in digital format. The North American film is produced by 20th Century Studios and is distributed in the physical market of the Spanish territory by Walt Disney Pictures, and is also available on the Disney+ streaming platform, at no additional cost.

Directed by Kenneth Branagh (Belfast), it has a script signed by Michael Green, based on the story written by Christie Agatha 85 years ago. Both the director and the screenwriter repeat regarding the film Murder on the Orient Express, where in this sequel they only repeat in relation to the 2017 film the leading actor Kenneth Branagh (Tenet) as Hercules Poirot and Tom Bateman as Bouc. The film stars a luxury cast led by Gal Gadot (Zack Snyder’s Justice League), Letitia Wright (Black Panther), Armie Hammer (Call Me by Your Name), Annette Bening (Captain Marvel), Ali Fazal (Queen Victoria and Abdul), Sophie Okonedo (The Wheel of Time), Tom Bateman (Below Zero Revenge), Emma Mackey (Barbie), Dawn French (Psychoville), Rose Leslie (Game of Thrones), Jennifer Saunders (The Pentavirate ), Russell Brand (Target: Bin Laden) and Nikkita Chadha (Eternals), among others.

Hercule Poirot will see his well-deserved and spectacular vacation in Egypt cut short, aboard a glamorous steamboat, when they discover the murder of one of the passengers. Finding himself in the middle of the Nile, and with no one getting on or off the ship, the Belgian detective will have to find the murderer who has put an end to a passionate honeymoon, where all the passengers have something to hide and plenty to recriminate. to the victim.

Death on the Nile is not recommended for children under 12 years of age and is shown in its Blu-Ray Steelbook version with a multitude of extras, which we have analyzed for Cinemascomics readers. The analysis of the tape is completely free of spoilers, in case you haven’t had the opportunity to see it yet and want to know what extras it contains.

Technical characteristics of the Blu-Ray:

Death on the Nile:

Director/producer/star Kenneth Branagh says people want to solve a puzzle, solving clues and arranging characters like his character, Hercule Poirot, does. For her part, screenwriter Michael Green explains how he met Agatha Christie at a very young age, when her parents brought home a VHS copy of the movie Death on the Nile, which traumatized him.

Mathew Prichard, executive producer and grandson of Agatha Christie, emphasizes that Michael Green was also the screenwriter for Murder on the Orient Express, and in both cases he liked that the story, the characters and the setting represent what Agatha Christie imagined when the wrote.

After describing the plot by the director, Sophie Hannah, author of the new novels based on the character, explains that Poirot is an amazing character because he arrives just when he is needed, where his ability to solve mysteries is like a superpower. But they also explain his hobbies and the memories and traumas of the past that made him the way he is.

In turn, they talk about the small creative liberties introduced in the film and how they vary from the book, which were made with the blessing of the author’s estate.

The year 2020 was the 100th anniversary of Agatha Christie’s first published novel, says Kenneth Branagh, and her work still has the ability to entertain audiences with fun, intrigue, heart and intelligence, according to the filmmaker.

Dr. John Curran, author of the book Agatha Christie’s Secret Notebooks: Fifty Years of Mysteries in the Making, comments that the writer was called the queen of crime. To this, Sophie Hannah, author of the new Hercule Poirot novels, adds that she read Agatha Christie’s autobiography, and she seemed pleasant, happy, and highly cultured; her where she continues to be amazed that she had such inordinate potential to write so many wonderful books.

Next, the cast talks about their relationship with the famous writer’s books, while also reviewing her life from the hand of her heirs.

For Kenneth Branagh it is a privilege to be able to show the viewer the fabulous scenes narrated by Agatha Christie. A recreation by the film’s production designer, Jim Clay, who talks about real settings on which the writer based her story, such as the Cataract Hotel. However, they did not copy it, but instead used it as a base, adding various architectural styles from 1930s Egypt, and built their own set composed specifically for the requirements of the script.

Along with this, the director talks about how they recreated the disturbing atmosphere and the claustrophobic environment that emerges from the book, with settings as luxurious as the Karnak, a luxury boat that travels the Nile. A set with great detail that was hidden to the cast until the very moment of filming, to have the sensation of surprise intact, being perplexed to see that they had built the complete ship, with great detail.

A level of precision and detail that meant a year of work to be able to finish it for filming. In part, because of the level of research carried out to be faithful to the time, but also because of the great level of dedication and detail included, in addition to the specifications required by the director, as if it were menacing, but also elegant, shaped of shark. In turn, they also recreated the Abu Simbel temple on the set at Longcross studios.

Wakana Yoshihara, head of hair and make-up, says that they tried different sizes, colors and shapes for Poirot’s mustache, which had to be the most elegant in Europe, according to the legendary writer. They came to make up to nine different mustaches.

For their part, they also tell us about the work of the costume designer, Paco Delgado, to recreate the fashion of the time, reproducing everything from scratch and delighting the entire cast with the result. In addition, they state that they recorded some sequences in 70 millimeters and on tape, providing a wonderful, enveloping and illusory sensation to the film.

Filmmaker Kenneth Branagh is a unique artist who can blend into different characters with exceptional skill, playing Hercule Poirot one moment and directing the next. This video pays tribute to the ability of the director and actor to manage to stay connected with both his cast and his creative team constantly, repeating with most of the latter with respect to the first installment, although from the main cast only Tom Bateman repeats, aside from of the filmmaker.

Eight sequences deleted from the final cut, being the following:

Death on the Nile Blu-Ray Steelbook

Description : Based on the novel by Agatha Christie, this story of unbridled passion and jealousy is packed with shocking twists that will leave you wondering what just happened until the shocking finale.