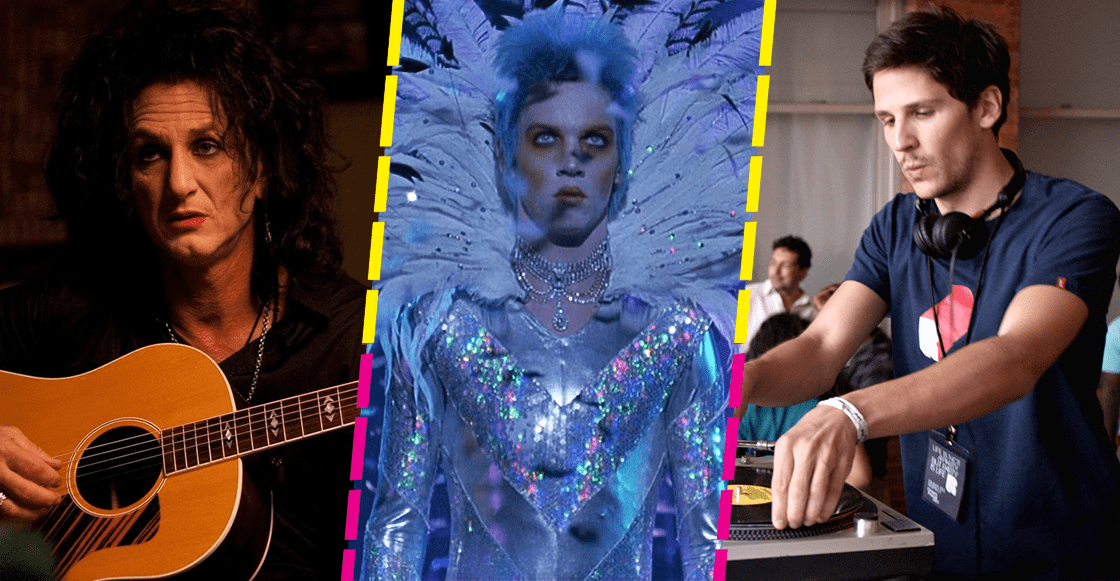 Since time immemorial, cinema and music have made a great couple. It was in 1927 that the first sound film in history was shown. the jazz singer and from that moment on, both connected and the geniuses within the film industry looked for a way to integrate this novelty into their projects. Later songs were added to accompany different scenes and moments of the tapes, but everything went to another level when the musicals went from the theaters to the big screen.

Years later came biographical or fictional films about some of the most important musicians of all time. The Beatles, The Rolling Stones, Bob Dylan, The Beach Boys, Johny Cash Bob Dylan, David Bowie, Queen, or Elton John are just some of the examples of artists whose lives we have seen in movie theaters around the world, and some of them even fully entered actingperfectly complementing their careers and showing that talent is what they have left over.

That is why taking advantage of the fact that we love going to the movies as much as seeing our favorite bands live, we decided to put together a list with some movies related to music. From films based on legends of the music industry to others that came out of the minds of filmmakers who also love to listen to songs, we are sure that each of these stories will delight all those who are happy playing that album or song that they love. it gives them goosebumps.

And eye, It is important to mention that in this list we do not include musical films (you know, the kind where the actors sing each phrase and there is a huge number every 5 minutes, jiar jiar), for that we already have a count and HERE they can check it out. Much less does it have a specific order, we simply arrange them in this way without much science. They are ready? It’s time for them to run for some popcorn, get comfortable and turn up the volume on their headphones so that fully appreciate the movies of this note.

Let’s start the list with a spectacular movie, no more and no less than rock star. In this story we follow Chris “Izzy” Cole (Mark Wahlberg), a singer who has everything to be famous and whose life changes when he is called to become the new lead singer of his favorite band. However, things spiral out of control as he experiences rockstar life, leading him into an extremely difficult situation. And watch out, because in addition to Wahlberg and Jennifer Aniston, there are cameos by great musicians like Rob Halford (who inspired the tape), Myles Kennedy, Zakk Wylde and Jason Bonham.

Where to see it? You can rent it on Amazon Prime Video

This Must Be The Place

In 2011, Paolo Sorrentino introduced us This Must Be The Place. This is a drama about Cheyenne (Sean Penn), a retired former rock star whose life is turned upside down when he travels back to New York to see his father before he dies. But along the way he discovers everything that his father suffered at the hands of a Nazi criminal during World War II and decides to look for him in the United States. And yes, since the movie is named after a Talking Heads classic, David Byrne appears as himself interpreting a melancholic version of this song.

At one of the highest points of his career, Eminem He made the decision to fully enter the performance beyond his videos. And his debut on the big screen was with a big movie based on his own story, 8 thousande, which follows the life of Jimmy “B-Rabbit” (played by the rapper), a fairly talented white MC who wants to earn the respect of the black-dominated Detroit rap scene with his rhymes. But in the middle of all this, has to deal with a lot of family, economic and sentimental problems leading him to the brink of the abyss.

Of course, this list could not miss one of the Oscar nominees in 2021. Sound of Metal centers on Ruben Stone (Riz Ahmed), a metal drummer who slowly begins to lose his hearing. This is when his life changes completely and luckily he arrives with a group of people who are willing to help him in this complicated process. However, in his eagerness to listen again, things get out of control for him and it is after a hard reality check that he begins to accept silence.

Without a doubt, the era of glam in the 70s is very well documented, but we are sure that there is no film that better portrays this moment in music than Velvet Goldmine (inspired by the life of David Bowie and Iggy Pop). In this film we meet Arthur Stuart (Christian Bale), a reporter who investigates the career of a rock singer after his mysterious disappearance and for that, he turns to people who were close to him, like his friend and collaborator, fellow musician Curt Wild (Ewan McGregor); his ex-wife Mandy Slade (Toni Colette) and more.

Where to see it? hbo max

We could not miss one of the Netflix movies that has caused the most emotion in recent times, neither more nor less than Metal Lords. This story focuses on three young heavy metal lovers struggling to succeed in a battle of the bands and earn the respect of their classmates. But along the way, their friendship and other personal points will be put to the test. In addition to the story, we could not leave aside the epic cameos that it has of legends of this genre such as Rob Halford, Tom Morello, Kirk Hammett and Scott Ian. (HERE we tell you more about this tape).

If we are going to put together a list of movies about music, whiplash it has to be yes or yes. In this film we follow Andrew Neiman (Miles Teller), a young jazz drummer who attends one of the best music schools of the country in New York. However, the teacher Terence Fletcher (JK Simmons) crosses his life, who, in addition to teaching him several things, sees talent in this boy and begins to pressure him to the point of expecting perfection in him. An intense and surprising story about the traumas that can be generated by the different musical teaching methods… which are often cannons.

Where to see it? You can rent it on Amazon Prime Video

Of course, in this count we could not leave hip-hop aside, and as we represent we have neither more nor less than Straight Outta Compton. This is a biographical film about N.W.A. the first gangsta rap group in history and whose members went from experiencing the violence in their neighborhood firsthand to become legends of this genre and voices of their generation. Here you will learn a little better about the situation that Eazy-E, Dr. Dre, Ice Cube, DJ Yella and MC Ren experienced, since they composed their first songs, the success, the excesses, the price of fame and much more.

If you are fans of electronic music, you will surely love this movie. In Eden we meet Paul, a young DJ who is taking his first steps into the spectacular French house scene of the 90s and together with his friend he creates a duo called Cheers. Little by little they are pleasing the public and they get to play in the biggest clubs in Paris, but this is only the beginning of a rapid, dangerous and above all ephemeral rise. Undoubtedly, this is a gem –somewhat crude– that lovers of this musical genre cannot miss.

Last but not least, we could not leave aside a film that we already consider a classic, School of Rock. In this film, Jack Black plays Dewey Finn, a musician who is obsessed with being famous and rocking out like in the old days. But after he gets kicked out of his band, he decides to take the name of his best friend and posing as a substitute teacher in a school where you will find a lot of children with a great talent for music with which it forms an epic grouping. And yes, we still think they must have won the battle of the bands.

Where to see it? hbo max

Crank up the volume: 10 great music movies you can stream