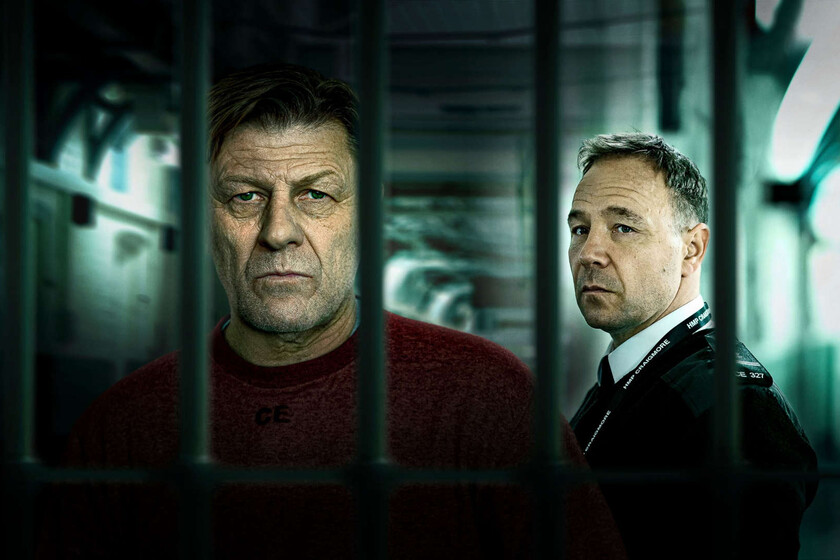 The shouting and accusations in which the police van arrives at the jail serves as a small appetizer for what we are going to see in the next three hours (episodes). Through the character of Sean Bean (who we currently see in ‘Snowpiercer: Snowbreaker‘) we get into his own particular hell, his own’Sentence‘(‘ Time ‘), the forceful BBC miniseries that we can see in Movistar +.

Bean is Mark Cobden, a professor with an alcoholism problem sentenced to four years for running over and kill someone while under the influence of alcohol. Secondly we have the story of Eric McNelly (Stephen Graham), a veteran prison official who is suddenly faced with a great moral dilemma.

Screenwriter Jimmy McGovern has since intertwined the lives of both the prisoner and the guard while exploring your own personal hells. On the one hand Cobden’s storm of guilt; on the other, that spiral in which McNelly gets into to protect his son, who is serving a sentence in another prison.

There is a phrase, I think in the first episode, with the first visit from Cobden’s parents, that says “You are here as punishment, not for it”. This maxim perfectly defines the journey that we are going to live with his character and, to a lesser extent, that of Graham. That is when the fact that guilt consumes you implies that you deserve whatever happens to you.

The McGovern’s excellent pen defines its main characters in a comprehensive way and that transpires in efficient dialogues and more eloquent than bombastic. With the use of other genre tropes he also knows how to move: the story is hard and, despite having some very violent scenes, he does not exceed it.

Knowing perfectly how to handle the times and needs of the story it is telling, the script avoids overexposure. For example, what happened that fateful night – something we see more through the nightmares of the protagonist, but later we will have the pertinent flashback – and with four very well spun stitches we have in our head the general image of who Cobden is.


This is helped by the masterful performances of both Sean Bean and Stephen Graham. The second is still a safe bet and an acting class that is very pleasant to watch. His own nightmare and questioning of his principles are well anchored and he manages to be a magnificent complement to the Cobden story.

Although it may seem so at first, McGovern is not interested in taking a big panorama about the prison system, corruption, violence and everything that goes on there. Yes there are some other references to it, but ‘Condemnation’ wants us to consider whether there is room (or opportunity) for a true redemption in a regime of punishment.

In short, ‘Condemnation’ is an excellent miniseries that catches from the very first minute, ensuring that we never stop looking at this world that McGovern has designed thanks, above all, to the superb interpretations of its protagonists.