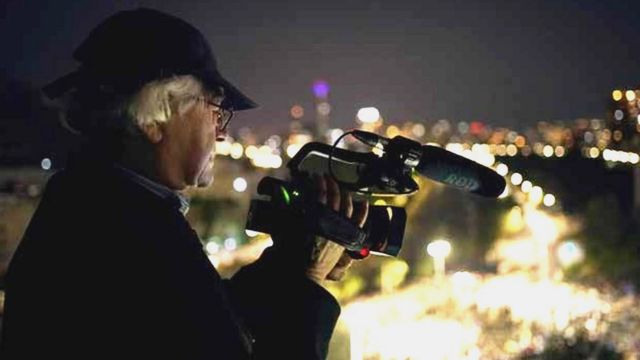 The documentary filmmaker Patricio Guzmán (Santiago, 1941) has dedicated his career to portraying and trying to understand Chile, a path in which he has created such emblematic titles as “The Battle of Chile”, “Salvador Allende”, “The Pinochet Case” and ” The nostalgia of the light”.

Author of more than 20 films, his titles stand out for their strong defense of human rights and his reflections in the first person. His voice and his style have been recognized internationally, with his works awarded at festivals as prestigious as Berlin and Cannes.

In his last job, “My Imaginary Country”Guzmán gives his view regarding the huge protests that broke out in Chile in October 2019 and that led to the drafting of a new Magna Carta by a democratically elected Assembly.

The filmmaker filmed the euphoria for the change that Chile experienced in those days, the violence with which many of the demonstrations were repressed, and the destruction that the clashes left in their wake.

Three years later, the situation is very different. On September 4, 62% of voters rejected the proposed new Constitution in a plebiscite. Approval was barely 38%.

It wasn’t what he had imagined.

In conversation with BBC Mundo from Paris, where he lives, the famous director shares his vision of the country that he is so passionate about.

Change your imaginary country with the result of the plebiscite? how do you imagines the new chili?What is the dream now?

But that dream of a fairer and more dignified country is more present than ever.

After the overwhelming triumph of rejection, dobelieves that Chili gave turn your back on the possibility of leaving behind the laws made during a military dictatorship?

It seems to me that we have to wait a bit to draw conclusions, but I think not, that the controversy will continue, the discussions, as we have already seen, will continue.

I don’t think people stay calm and forget everything and everyone goes to their work and that’s it.

What has happened is too different from what many of us thought could happen. It is a surprise and it means that in a certain way the people who were for the approval did not have all the elements.

I think what happened is serious. You have to go back and start over.

What do you think failed to capture followers for approval?

There is no single or simple answer. We all fall silent. Puzzled.

But there is something that can be seen in the film itself and that is that this movement has no bosses, no parties, no ideology. And in that context it is normal for things to be unpredictable, difficult to explain.

Of course there was a huge campaign against it, fear of very radical changes, distrust, which is a recurring theme in Chile.

But there are many other things that the country itself is trying to explain.

For now the dream is still alive and will have to find a new channel. And we will be there to film it.

doyese lost the spirit that lit the fuse of the explosion of October 2019?

In the documentary you wonder what happened for a country to wake up in such a brutal way. doANDAre you closer to having an answer now?

In the film it is clearly seen that public opinion changes, analyzes, searches and launches towards a different and new horizon that means changing the Constitution that was drafted during the dictatorship of Augusto Pinochet.

Now we have turned back. Even the Boric who speaks in the documentary when he wins the election seems like a different Boric than the president who speaks today.

The social explosion, like Chile, is full of contradictions.

Because first it’s one thing, then another, and then another. And it all seems very logical. So far the change proposal is overwhelmingly rejected.

What are those contradictionsFrom Chile What do you mention?

Being a country with a significant level of development, Chile maintains a huge number of negative factors in the social plane, in the educational plane, in the salary plane.

Let’s say that Chile is a well-dressed country, but miserable.

There is a structure that works, but the result does not, because that structure does not work for everyone.

There is a sector that does live well, but it is very, very limited.

What does Chile need to overcome these contradictions?

Chile is by nature a very contradictory country, used to surprising you.

A country of earthquakes that take you by surprise.

That doesn’t change overnight, or maybe it never changes.

You can only hope that minimums will be traded, which is what people are asking for.

In your trilogy”The Battle of Chile“ you collect images of the popular mobilizations that took place during the mandate of Salvador Allende and after filming several weeks after the coup d’état, they take you prisoner to the National Stadium in Santiago. Does the social outbreak of 2019 have something to do with what happened in 1973?

Well, state violence is the same.

There are different circumstances, but the fact of having a well-organized army or police force on top of you, ready to wipe you off the map… that’s the same story, the same repression, the same man for himself.

It is the repetition of a strong State that devastates those who do not agree and that imprisons and behaves arbitrarily.

The outbreak begins on October 18 and tor you land in Chile a year later and still there are stones in the street. What country do you meet when you arrive?

A disconcerted and tense Chile, a country full of problems that have not been resolved, that is waiting for the presidential election and the constitutional issue to pass before it begins to live, because what is being experienced at that moment is provisional.

Chile has lived in fear of the possibility of another coup like the one in 1973, that is, the end of life.

Because we know the end of life.

All the voices in the documentary, all the interviewees, are women...Why do you make that decision?

The women’s movement in Chile is of enormous importance. She has been everywhere, in all the difficult situations and with solutions, with alternatives, with interlocutors, with arguments, with a remarkable positive and constructive attitude.

I have always had a vision, perhaps a little exaggerated, that Chilean women are far superior in many aspects to the social conduct of men.

I find them to be interesting, committed characters and they fill me with admiration.

There are in the documentary images showing violent clashes and lto police repression it is brutal. Do you think that the relationship between the Chilean people and their carabineros is irreconcilable?

I think I know that it can be arranged and a coexistence can be reached.

But of course, several super civilized police directors would be required, with clear ideas and influence.

Because the Carabineros, like any military body, is a solid, large, powerful and hierarchical structure.

It is difficult to promote changes in there, if there is the idea of ​​making changes.

They are institutions that have remained static for years.

Was it difficult to sign in that theater of war?

In this type of film there are always moments of great difficulty and others in which everything flows.

We started very calmly, but as things progressed we became more and more cautious.

In this case there were moments of pleasure and others of tension and danger.

With experience, you know when you have to step aside.

We are used to living in the midst of strange tension. That’s what I feel.

“Chile is a well-dressed, but miserable country” – BBC News Mundo