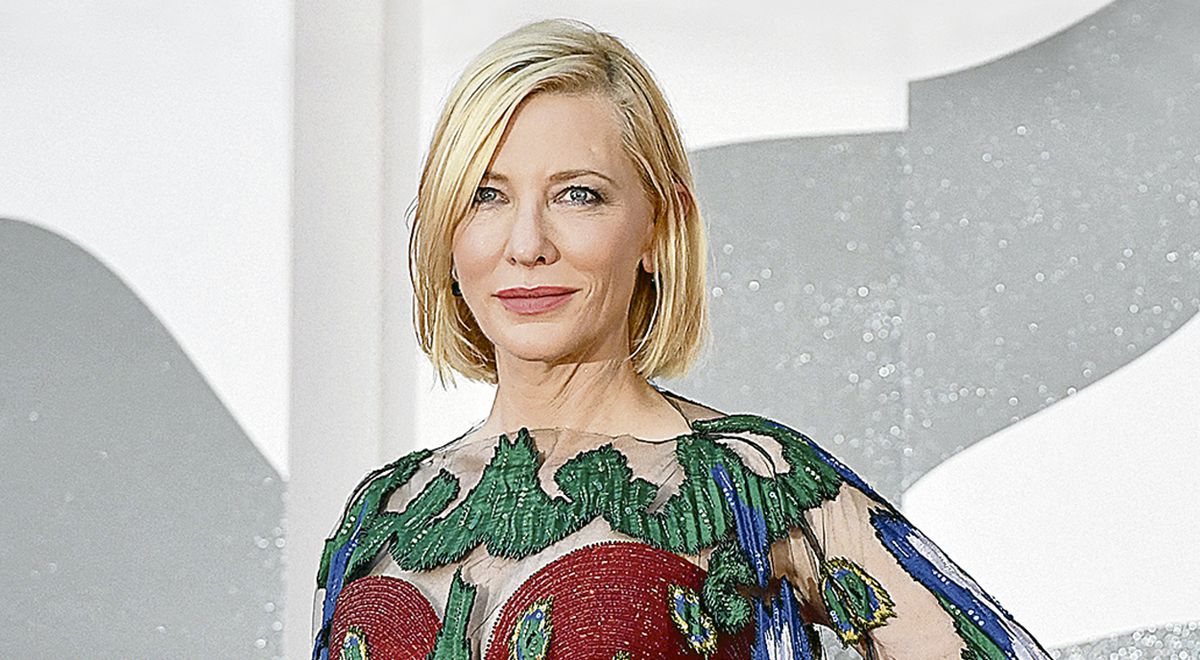 In Don’t Look Up, the new Netflix movie, multi-award winning Australian actress Cate Blanchett plays Brie Evantee, a famous television host whose show represents all the frivolity and absurdity of many live newscasts and talk shows that prioritize banalities in their content over the truly important things, with the sole purpose of gaining audience.

In the story directed by Adam McKay, Evantee receives on the set of ‘the daily riP’ Dr. Radall Mindy (Leonardo Dicaprio) and astronomer Kate Dibiasky (Jennifer Lawrence), but instead of taking seriously their announcement about a comet that will end the planet’s existence, she downplays the situation. “His style is like a confrontation to what it is like to be on television, especially in how the news or entertainment spaces, which is what his program is about, do not need so many authentic or natural people in front of the cameras,” says the actress in special interview for La República.

“The great message of the film is to talk about the inability or denial to face reality, which seems to be the real pandemic we are experiencing now, ”adds the two-time Oscar winner for El aviador (2004) and Blue Jasmine (2013).

YOU CAN SEE: Do not look above: Netflix and its disappointing satire, does not convince with its cast

Known for outstanding performances such as the elf Galadriel in The Lord of the Rings or the diva Katherine Hepburn in The Aviator, in this black comedy Cate Blanchett takes the role of a cold and sophisticated television woman. For the construction of Brie Evantee, costume designer Susan Matheson prepared an elegant outfit with exclusive designs by Roland Mouret, Tom Ford and Giorgio Armani. In addition, there was a whole physical job for the actress: they gave her skin a special tan touch and fitted her with false eyelashes, contact lenses and very white false teeth.

“Brie probably considers herself a realistic person. He moves in the real world, but I think his fantasy is an impending catastrophe. So I think the news of the comet for her is literally an orgasm. He feels, immediately, attraction for Dr. Mindy, because I think he boasts of his intellectual side, and being with him means added value to his brand ”, says the interpreter about her character.

YOU CAN SEE: Don’t look up: what is the meaning of the post-credit scene?

She says that director Adam McKay summoned her to be part of the film 18 months before filming and that the experience was surreal. “He asked me if I wanted to have this little role. I hadn’t even read the script, but I said yes: ‘I’ll do it for you.’ He then described my character as a talk show host. When I read the script I said: This is incredible! And as filming progressed, he would send audios to Adam saying, ‘Are you psychic? Did you just see what happened to an American television host on her show? It is exactly what is written in the script. Did you see what was going to happen? ‘ Because it literally seemed like it had predicted the future and that helped make it feel like a satire not too far removed from reality TV, I felt like we were living it while doing it. It was a surreal experience, ”says the actress.

In addition, he assures that participating in Do not look up was also a practice like few others due to the cast made up of a true constellation of stars. “There are some things that cannot be denied, I think that the extraordinary cast that Adam (McKay) has managed to put together, from Ariana Grande to Meryl Streep and Leonardo DiCaprio, is insane. It’s strange to walk into a movie that has been in the works for a while and on my first day on set seeing Meryl Streep as President of the United States and Jonah Hill, who thankfully I had already worked with before. After having been in quarantine for so long and not being able to leave my house, returning to this environment was great, “he confesses.

For Cate Blanchett, the film’s ironic tone has the director’s stamp on it. “The script is incredible, it has the essence of all of Adam’s work in the sense that it is hilarious, but also very painful. In addition, it is very recognizable, it takes you somewhere. It’s one of those movies that, after seeing them, you come out changed and you can’t stop talking about it. I think people really need to talk about certain things, “says the interpreter who will soon star in ‘Disclaimer’, the new Apple TV + suspense series directed by Alfonso Cuarón. Here she will play an investigative journalist, whose world falls apart when she becomes the protagonist of a complaint. The opposite of Brie Evantee.

Cate Blanchett: “Don’t look up it was a surreal experience”