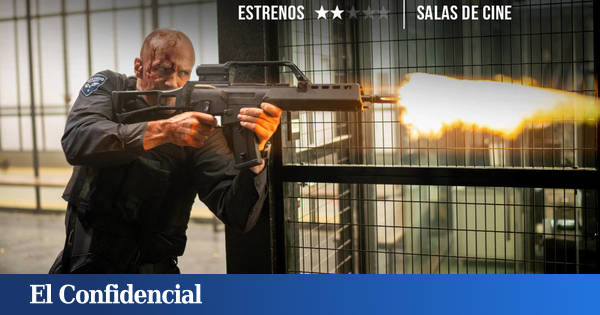 Once a long time ago Guy ritchie was that English director with ‘chav’ gestures —Just gestures, since his parents, after divorcing each other, married each other baronies— who set out to renew the British gangster thriller with a devilish montage rhythm —he made the jumpcut his hallmark—, characters from the margins turned into philosophers of life, quick dialogues, ultraviolence, bare fist fights choreographed to the nanometer and, also, that magic touch, that I don’t know what, that managed to turn the tacky – ‘tacky’, as the English say – into class. Ritchie, like Fincher, Jonze or Gondry, belonged to that group of filmmakers who in the nineties brought the rapid language of advertising and MTV to the big screen, people who had started from the bottom, risky directors with few means, but with adrenaline from immediacy stapled to the hypothalamus . But something is not right when talking about Ritchie always has to go back to ‘Lock & Stock’ (1998) and ‘Snatch: Pigs and Diamonds’ (2000).

Trailer of ‘Awaken the Fury’

If something has been Ritchie’s career in recent years, it is uneven: his review of the most ‘British’ Briton, Sherlock, terribly polarized the critics, but he got the support of the public and, at least, to give something to talk again after almost a decade of low profile. With his last revision of turns of the Arthurian myth in 2016, there was at least one attempt – albeit a failed one – to get out of the lane, to impose the most outlandish aspects of his identity as a filmmaker, and in ‘The Gentlemen’ found perhaps the exact point of baroqueism, although the essence of self-plagiarism was difficult to hide. But as self-parodic, excessive and bombastic as the result was, at least Ritchie was there, visible. And in ‘Wake up the fury’ it is, perhaps, the first time that the director does not appear. Beyond the plot — heist action movies — and the leading role of Jason Statham —one of his fetish actors—, any Matt Eskandari, Rod Lurie or Sam Grave on duty — don’t you know who they are? For a reason, they could have directed this ‘thriller’ whose biggest claim is the return of Josh Hartnett to big-budget cinema two decades after Hollywood cast him out with out-of-the-box boxes, as he well says. Juan Sanguino in this great article from ‘El País’.

Rarely had the director demonstrated such a conventional formal narrative like this time. The cameras move for purely stylistic reasons, but without irony, without expressiveness. The musical ‘leitmotiv’, serious and punchy, could be randomly swapped for any ‘thriller’ saga soundtrack. And there is no humor in the dialogue, either, in which the actors spit out such little hackneyed phrases as “don’t touch my nose and we’ll get along,” when the characters of Statham and Hartnett discover that they have to work together. The fact that the script is not written by Ritchie – they sign it Éric Besnard and Nicolas Boukhrief, who have already worked together on ‘Target: Paris’– seems to suggest that this is a commissioned film that Ritchie has accepted perhaps to reconnect with Statham, whom he had not directed for 16 years.

Because it is the actor who returns to play the type of character that he already knows by heart after the sagas ‘Crank’, ‘Mercenaries’, ‘Fast & Furious’ and others: the alpha male, mysterious and sparing in words, the machine of Precision kill with cockney accent. This time, Statham is Hache, a grumpy man who starts working in an armored van company that moves large amounts of money. He arrives to replace one of the vacant positions that were left when two company guards were executed in the middle of the street to steal the loot they were guarding. When, some time later, a group of thieves try to steal Hache’s truck and he executes them with a clean shot, his companions – among whom are Hartnett and Holt MacCallany, Bill Tench in ‘Mindhunter‘- make him a hero to the team.

But, the big question is: Who is Hache really? Through a puzzle of few pieces in the form of ‘flashbacks’, Ritchie sheds some light on the character and on why someone with such cold blood and shooting precision has ended up as a security guard. If in the case of female characters there is the genre of ‘rape and revenge’ (rape and revenge), the male equivalent could be trauma and revenge ‘thrillers’ in which a lone wolf decides to take justice into his own hands and become a vigilante. Although, in iconic titles of the genre like ‘The vigilante’ (1974), with Charles Bronson, or most recently ‘The Equalizer’ (2014), with Denzel Washington, the protagonists are usually ordinary citizens or retired agents who train to become LAW.

‘Wake up the rage’ is full of commonplaces of inconcretions. As in Ritchie’s filmography, pubs with pool tables and gangster businesses cannot be absent, but here sleaze is not an instrument for comedy, everything is affectedly serious and painful. There is no emotion and there are no iconic images, no matter how hard they try to repeat them over and over again. Slow cameras, drone glides, everything is in place and used as everyone has used it hundreds of times. The little originality It is offered by Hartnett in the quasi-comic role of a fardon guard that, in moments of crisis, cries and kicks and suffers panic attacks and does not know very well what to do. The rest, except for the final shooting – and thanks, probably, to the realistic sound work – is a ‘patchwork’ of moments in which the protagonist walks around the city looking for something or someone. Ache acts as the nemesis of an underused Scott Eastwood, who takes too long to appear and whose story rushes too quickly, throwing the two parts of the film out of balance. With a great ‘casting’, a budget more than loose, Guy Ritchie can only do “the umpteenth Jason Statham movie.”