Tweet
Share
Share
Pin
Ángela Córdoba, at the age of 15, participated in the 2008 American Ballet Competition, and won first place. She then at the Youth America Grand Prix she won two scholarships at The Washington Ballet and at The Rock School for Dance Education in Philadelphia.

Daily, more than four million citizens mobilize in TransMilenio —according to the District—, each one of them with their desire, their problems, their world. However, there are times when the paths and the gazes of the passengers cross. In Bogotá’s mass transportation system, it normally happens when a day of protest forces citizens to get off the vehicles and walk to their destinations: although each one is a world, at that moment they share frustrations, fatigue and a story.

The most recent day of protest that took place in the capital was due to the restriction on motorcycle grills ordered by the Mayor’s Office, in this context, with the buses stopped and passengers opening the doors to get off for a walk, some crossed paths with Angela Cordoba, also known as Anjah, a young woman who climbed on one of the articulated ones and, from one moment to another, began to dance. She hung from the pole, brought her leg up, rested it on the open door, turned around a few times, and climbed out. One user decided to get away from her, others saw her for just a few seconds and ran away from her, lest she ask them for some coins. Few understood what was happening, much less realized that, from the station, someone was recording it.

The video was uploaded on TikTok and went viral., in less than 24 hours it had already reached more than 300,000 views and thousands of comments. Paradoxical: although in the recordings of her the people who were next to the professional dancer did not look at her, when they saw her in networks they did not even blink, although they still did not understand what was happening. The profile on the short video platform was newly created where it was shared belongs to Leo Carreño, a film directorwho had also published two other videos in which Anjah was seen dancing inside an articulated vehicle and in a TransMilenio station.

What encouraged that woman to get on the buses, spread her legs, walk around, if it wasn’t asking for money? A new form of protest? An advertising campaign? Do not, an award at the Cannes Film Festival. Infobae Colombia He talked with Córdoba and Carreño about what happened that day and accompanied them on one of their particular ‘takes’ of the mass transit system.

Anjah, the dancer who takes TransMilenio with ballet. Illustration made with photos taken from @danzakihai – Infobae

This year, the TikTok platform, with its short and vertical format, became a sponsor of one of the most important film festivals in the world, Cannes, opening a new category, called #TikTokShortFilmin which content creators can participate by publishing a short film of up to 3 minutes recorded vertically and on the famous social network.

Carreño is a plastic artist and film director and did not want to miss this opportunity. He teamed up with Anjah, a professional ballet dancer and corporeality teacher, to make the short film that is already participating in the film festival. For the director, the idea is ‘transgressive’, because the mere fact that a film festival opens a space for short recordings in vertical format shows that the future is getting closer and, in the same way, he wanted to break with his idea into the daily life of cold Bogotá and its inhabitants.

“The call for Cannes motivated me to carry out this small production in urban spaces, I joined Anjah for that and the entire media phenomenon emerged from the same platform, which, likewise, is an impact that the festival itself seeks. It’s a pleasant surprise,” said the director.

For her part, the woman who began to dance “from her belly” —according to what she said— joined her idea and explained to us what her role is in the short:

“My character is Carla, she is in an anesthetized society, a bit mechanical, and she goes into these states of delirium because she can’t handle it anymore and she dreams of being a dancer, but you wake up and you have to work and you’re immersed in that rhythm. . These states of delirium are getting stronger and stronger and in different spaces, on the street, the traffic light and the TransMilenio.”

Before publishing the final version of ‘Delirium’, they shared three small pieces of the dances that Anjah had done in TransMilenio that They were a bomb on the internet. When Córdoba was asked what he felt when he was at the station and the bus dancing in front of dozens of passengers, his answer was “indifference”However, she was surprised with what she had caused in networks. Not only were there hundreds of people expressing their admiration for her talent and her courage, but also a few violent people who claimed that if they had seen her “showing everything and opening her legs”, they would “kick her down”; Both sides of the coin are “a clear example of the chaos and crisis in society”, according to the dancer. 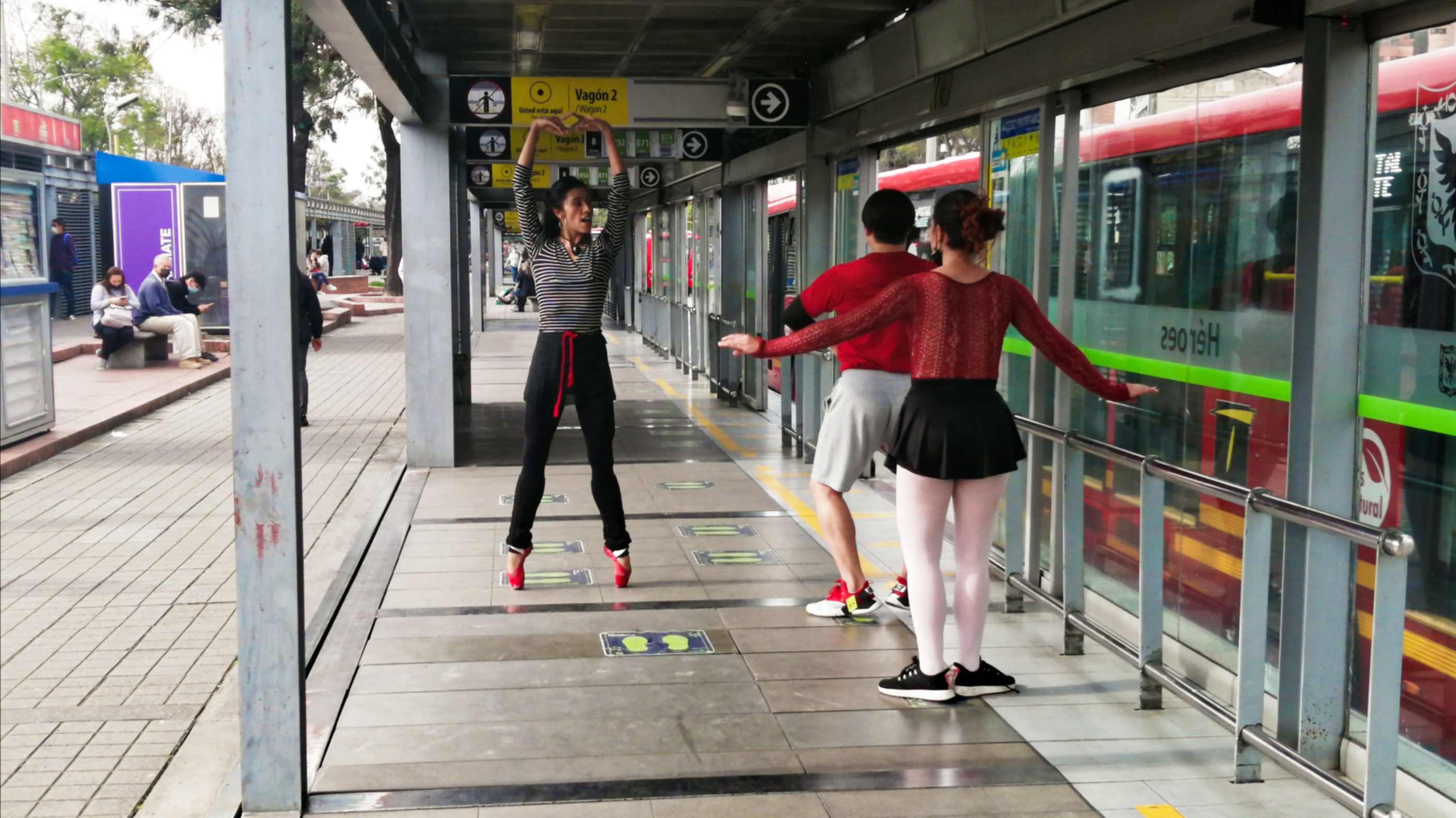 “Everything was very spontaneous, it was something that had to come out now. I didn’t have time to prepare a choreography or for Leo to prepare a whole team… We laughed afterwards when we saw the shots and joked, ‘what a great director, to make a traffic jam and have so many actors’. But it was tapping into what’s really going on in society,” Anjah said.

The intention of ‘Delirium’ is to reflect how ‘anesthetized’ humanity is, each one living under their desire, without realizing what is really important. The best is that they didn’t need extras, actors or a very large crew to do it, because the passengers who had the opportunity to cross paths with Anjah that day, did not take their eyes off their cell phones or the window, completely avoiding any interaction with that strange woman. Nobody made a comment to her, or approached her to ask what she was doing.

For Carreño, the reactions of those who were at the time the videos were recorded correspond to the fact that “they felt a rupture within a lot of conventional structures rooted in a routine and rhythms. The impact really is to break with those day-to-day structures that people carry inside these massive spaces, it is the unusualness and the unexpected”.

The more than 300,000 views on networks and the video that continues to be shared on TikTok, Twitter, Facebook and Instagram showed Anjah that beyond a transgressive idea for a short, what they had done was take the anesthetic out of a lot of people. Now she wanted to see if they would be able to ‘take’ the TransMilenio together with her, with dance and improvisation, that’s why convened a ballet class at a station in the north of Bogotá.

It was 3 in the afternoon on Wednesday, April 13 when, before the curious gaze of public transport users at Los Héroes station, three characters were stretching and looking for a speaker to play classical music. That was Angela Cordoba —Anja— along with two people, Ana and Julián, who, seeing a video of hers that went viral, responded to her call to a ballet class in TransMilenio. Coincidentally, they are both dance students, and they decided to leave the traditional ballroom to ‘disarticulate in an articulated’ with the professional dancer.

Until that place came Infobae Colombia and he captured the indifference of those who, in their eagerness, passed in front of the dancers running so that their bus would not leave them; also the indifference of the restless looks, even people who seemed to want to dare to dance, but were overcome by grief. Anjah started with basic stretches and then used the station bars to do basic classical ballet positions.

For Julián, having a ballet class at TransMilenio was undoubtedly something that took him out of his comfort zone: “The academy has been in charge of framing us students and dancers with aesthetic, physical and spatial canons. It greets you saying ‘welcome to this classroom’ and puts you in a state of alert, you don’t know what comes next”.

‘Plie’, ‘Jeté’, ‘Tendú’ and ‘Relevé’ were some of the key words that Anjah repeated and the young people followed the class fully. However, to get the highest rating, Anjah did not want her pupils to follow a choreography and comply with a technique. The grand finale of the class was improvisation at the station and be able to board any joint to dance.

Anjah, Julián and Ana improvised with their ballet steps in front of TransMilenio passengers

They made the aisle of a bus their stage and danced, danced, improvised, in front of an audience that, once again, disappointed with their indifference. While they took the space, behind them with his cell phone was Leo Carreño, film director, recording everything for TikTok.

Ana, for her part, highlighted that Anjah’s video and her proposal to occupy this public space with art was special: “It is something that transcends politics and that breaks everything it is a risk to stand in front of an audience as hostile as Transmilenio is… it is to come down from that artistic and elitist pedestal, especially to ballet, to take it to everyone”.

Although Ángela Córdoba prepared herself to be a professional ballet dancer from a very young age and succeeded, some stereotypes and rules of that world made her look for other arts that allowed her to express herself through her body, without limits.

Throughout her life she has lived in the United States, Mexico, Cuba and Colombia, discovering sounds and artistic expressions that allowed her to be herself., in body and soul; All this journey of hers has turned her into a woman who not only teaches classical ballet, in her own way, but also teaches classes on body awareness, yoga and somatics through her own project called Ki Hai Dance.

María Paz Guerrero: feel the poetry in the bones
Martina La Peligrosa and the reason why she would not participate in a beauty contest

Anjah, the viral dancer for her performances in TransMilenio, seeks to surprise at the Cannes Festival