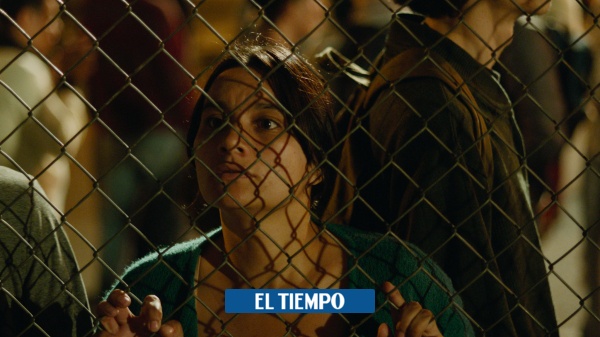 In 2014, a short film about a teenage girl named Leidi led to Simon Mesa to cross the Atlantic, from his native Medellin, a Cannes, on France.

That year, the production won the Palme d’Or and the name of the young director began to resonate in the world of cinema.

But that wasn’t the only time he made it to the renowned international film festival; in 2016 the short Mother was also part of the Official Selection of Cannes.

Five years later, the connection doesn’t stop. It seems destiny or reward for their efforts, because now the director will arrive with his first feature film entitled Amparo, which will premiere there in a version with pandemic protocols from July 7 to 15, and which may aspire to various awards within the framework of the Critics’ Week, in addition to the prestigious’ Cámara de Oro ‘, awarded by the Festival jury to the best debut feature.

(In context: Colombian film competes in the Cannes Critics’ Week).

In this selection, the work of the paisa and Liberty, from the Spanish director Clara Roquet, they are the only Spanish-speaking films.

Participation for him is a reason for joy, as he acknowledges. However, it has another tint that inflates the film industry in Medellín with pride because since The Rose Seller, from Victor GaviriaIn 1998, an Antioquia film, a feature film, was not at that festival.

“It is a great joy to be able to be in the Cannes film festival But, let’s say, I also try a lot to sit down and put my feet on the ground and that is because cinema transcends Cannes. There are many things and movies usually have a stronger media relevance when they appear at festivals. But these are a very small part of the process which is a very big thing, of many years, of a lot of work, so it is like a little part no more ”, he comments from his room located in Sweden, while it was night and afternoon in Colombia.

(You may be interested in: They will install giant screens in Medellín to see the Copa América).

From that Nordic country, he advances the final touches of Amparo so that it is suitable for a projection in the cinema. Among the tasks is sound mixing.

To all these, Mesa does not minimize the importance of the festival that has given him pleasant moments and recognition.

“It represents a lot for a movie like Amparo that, let’s say, it is not a commercial movie and that these spaces give it a lot of visibility so that the exhibition and distribution of the film can be made a little more profitable both in Colombia and in other countries ”, he adds.

What he also recognizes is that it is an accolade to the effort, because the movie was not easy to make.

It was recorded at the end of 2019 in Medellín with a small budget, which had to be raffled to achieve the best possible because it required setting an Antioquia capital in the 90s, when the city lived years of terror due to the war .

The story takes place in 1998. There, Amparo, a single mother, struggles to free her teenage son who has been recruited by the army and is enlisted in a war zone. “She is launched into a race against time in a society ruled by men, corruption and violence”Says the synopsis.

(In other news: These are the communes with the highest violence against women in Medellín).

That 90s Medellín that the script proposed required production efforts.
“There were scenes like a battalion with many boys and there were many extras and this implied great costs, so we made a film that implied many costs but with a very low budget,” recalls the Antioquia director.

The protagonist is Sandra Melissa Torres, a natural actress who “was emerging as a person who had qualities that suited the character very well,” as Mesa himself tells it.

It seems that the script was adapted to her in the middle of the casting that scrutinized professional and empirical talent on the part of the production company called Ocúltimo, which he created together with the photographer Juan Sarmiento and which brought this feature film forward.

“She is a person full of life, very outgoing and we rehearse a lot. He went for a month or maybe more to the film office that we had where we rehearsed and it was a relationship that became very constant, “he says.

“We talked a lot and let’s say that at first she was a little scared of acting and was a little doubtful, but more and more she understood that she had that ability and she certainly has a knack for acting“Adds Mesa about his protagonist.

As July approaches with the festival and with it, its stars, actors and directors, Simón and his partner advance the arrangements for Sandra Melissa to travel to French lands and accompany them.

The task is not easy because they require money and aid is scarce in pandemic and economic crises that the country is currently experiencing. However, they work to achieve it.

Precisely the last time a Paisa film was in the summer, two of its protagonists traveled with Víctor Gaviria, the director of La vendedora de rosas. Back then they traveled Lady Tabares, who played Monica, and Giovanni Quiroz, who played the role of ‘Zarco’.

(More information: The story behind the death of Zarco, from La Vendedora de Rosas).

To get to Cannes and other festivals, there was a way to go. First came a passion for cinema, which grew when Mesa advanced his audiovisual communication studies at the University of Antioquia, in Medellín.
After graduating he traveled to London, where he reaffirmed that same passion by studying at the London Film School for three years.

Being there opened up a broader spectrum for him to love cinema, to write scripts and to direct himself in the direction of audiovisual productions.

“I had never left the country until then And let’s say that it gave me a very different perspective on life, well, and of course there I met many friends from different parts of the world who showed me the cinema that was made in their countries and also at school I was able to know a lot of cinema ”, he explains.

In addition to the clapperboard, working with his actors in different directions, Simón also distributes his knowledge.

It is a source of great joy to be able to be at the Cannes Film Festival but, let’s say, I also try a lot to sit down and put my feet on the ground and that is because cinema transcends Cannes

Shortly after completing his career at the University of Antioquia, he started work as a teacher, a facet that has helped him to overcome the economic onslaught of making films only in Colombia.

“It is that when one makes films in Colombia, or at least as many of us do, it seems that we do not work, because we are in a project that lasts many years, which cannot easily give you profitability because cinema is very expensive and is an art”He comments.

(Read also: Vásquez building: a heritage asset that is now a cultural center).

To record Amparo withdrew from the University of Antioquia because it required all his time and now, when the film is about to give birth, Mesa is already a teacher at the University of Medellin, where he takes a semester in front of students eager to learn.

Since his role as a guide in the cinema, he has seen that young people, at least in the capital of Antioquia, are becoming more and more interested in the seventh art.

The role of women

All that rambling around the academy led him to those three productions, which today have him on the radar of Colombian cinema and, why not, worldwide.

Curiously, the two shorts that he wrote and directed and now the feature film have something in common: women as the protagonist and their struggles in the capital of Antioquia.

Leidi, who tells the story of a teenage mother and was a story asked for her to direct; Mother, which is about child sexual exploitation; and, now, Amparo. All with Medellín as the epicenter of the stories.

(What’s more: The dream of leaving a pasture in commune 13 to succeed in Europe).

Mesa acknowledges that he has not always wanted women to be the protagonists of his stories, but he does say that his own mother has influenced his way of making films.

“Amparo does emerge in its first versions of the script as a need of mine to get closer to that story of my mother, it is not the story of my mother, but part of that intention of many experiences, I am a son of one with the stereotype of the single mother who works as Amparo is”Says Mesa about his experiences.

Precisely this film occupies him, for now, all his time. Meanwhile, he finalizes details to finish it and plans his trip to Cannes, but also thinks about its premiere in Colombia, which he hopes will be this year, although there are several factors that must be taken into account for it to become a reality.

(Read also: Medellín, the first District of Science, Technology and Innovation in the country).

“We really want to release it as soon as possible, but it is not something that is a matter of months because we are also understanding the pandemic ”, he concludes from his room in Sweden, where he continues to prepare everything with Amparo.

Other news from Colombia

– ‘I kill you, I kill you’, the audio that gave away the assassin of Caleña in Israel