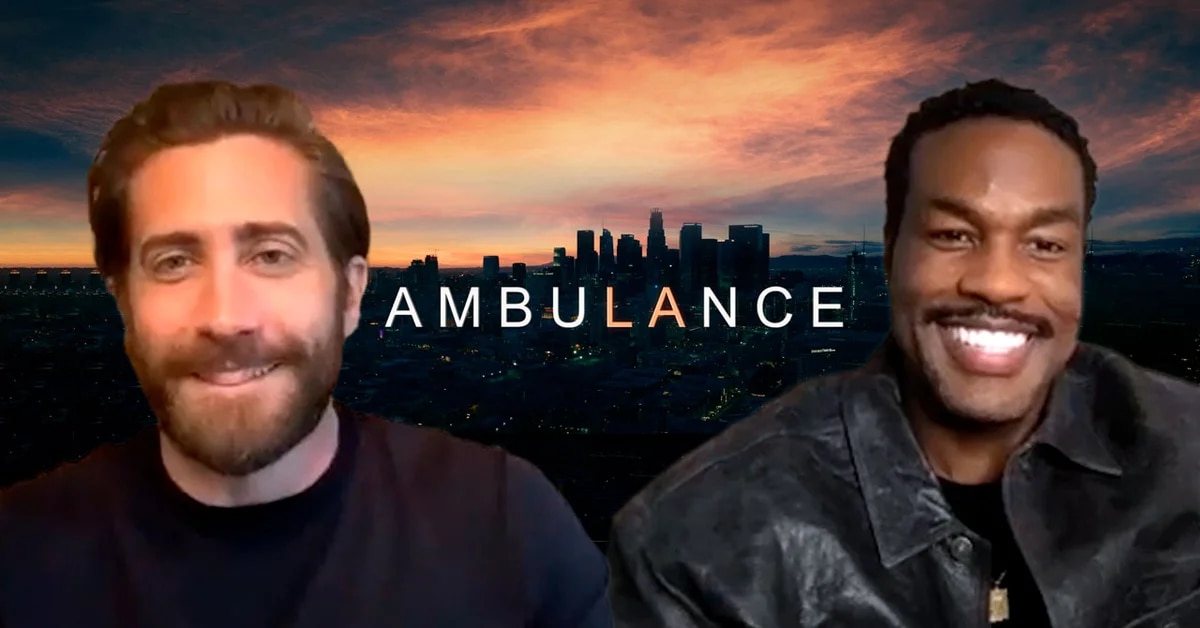 
There is no doubt that the two protagonists of the new film from Michael Bay managed to create a friendly relationship due to the evident connection they showed in the interview with Infobae three weeks before the premiere. They laugh, seek each other out and make jokes about each other all the time. Jake Gyllenhaal and Yahya Abdul-Mateen II are two of the actors of the moment and participate, together with Eiza Gonzalezon Ambulancethe action and chase film from the director of 13 hours who looks a lot like his best version.

For more questioned due to the path he took in the series of films of transformers and the production of similar films such as The ninja turtleshis last two adaptations, Michael Bay He continues to be the director who influenced the action genre from the 90s and 2000s with films that will remain in everyone’s memory, including the actors. “Since i saw The rock I thought I wanted to be in one of his movies.” confirmed Jake Gyllenhaal to the question of Infobae about whether it is a pending account for any actor to be in one of the director’s productions. Yahya Abdul-Mateen II added his favourite: “Mine was probably bad boys”.

In this film, which arrives this Thursday in theaters in Latin America, Jake and yahya they play two brothers, Danny and Will Sharp respectively. The first is dedicated to robbing banks and the second is an ex-military man who needs a huge sum of money to help his wife since he has to face medical treatment. It is not necessary to tell them that something goes wrong and both end up in a chase that will be the main frame of the story. Gyllenhaal defines very well the filming and its hours on top of that ambulance: “We shot in a way where we were running and shooting all the time.”

“I think I got used to Michael [Bay] had a lot of energy and sometimes I usually reflect the energy of my directors and his was so much that an indication for my character like ‘go this way’ ended up being like that all the time”, he says Jake Gyllenhaal about the more than 35 days filming Ambulance. While the actor recounts his experience, his partner, Abdul-Mateen II, adds a few words about what it was like to work together the three: “When I found out that Jake was making a movie, I thought: ‘I want to do that too.’ Then I read the script and knowing Michael’s background, I felt like we were going to have a good time and we definitely did.”

After the failed bank robbery attempt, Danny and Will Sharp get on the aforementioned Ambulance which gives the film its title and adds a new member: a paramedic, played by Eiza Gonzalezwho is kidnapped and ends up being part of the chase as a hostage and then with a well-defined role inside the ambulance. Michael Bay gives a little more room for character development in this film and Jake Gyllenhaal achieves a great villain: “What I like about this character is that he walks the line. His intentions are… well, he loves his brother and they grew up in a way that was really complicated, where they were both taught to rob banks and that doing things like that was appropriate. Under those conditions, children absorb it as normal. But they love each other and that ends up being the heart of the movie.”

Regarding the experience inside an ambulance and recognizing the role of the paramedics, both actors acknowledge that, although it is an entirely action film, Michael Bay managed to give a message about the adrenaline that is lived in there: “The film gave me such a deep admiration for the people who do this work, in such a small space. That people’s lives are changed and saved is extraordinary. We could hardly perform there, I can’t imagine trying to save someone’s life.” story Gyllenhaal about his approach to that experience. yahyawinner of Emmy by Watchmenadded: “These people work in situations that deserve all the accolades and medals possible.”

Far from being Bay’s essential work, ambulance is a forceful action drama marked by the constant chase and all the narrative style of the director. with flashes of bad boys and Pain & Gainand a slight inspiration in the famous Fire against fire by Michael Mann, this film has a difference with respect to his own filmography: he works the characters better in the midst of so many explosions, engine noises and gunshots. Close to the best version of himself, Bay again achieves a movie to the delight of action lovers.

first preview of Tokyo Vicethe HBO Max series directed by Michael Mann
Outer Range: the atypical western that comes from the hand of Josh Brolin
What is it about no respitethe French action movie that is among the most watched on Netflix?