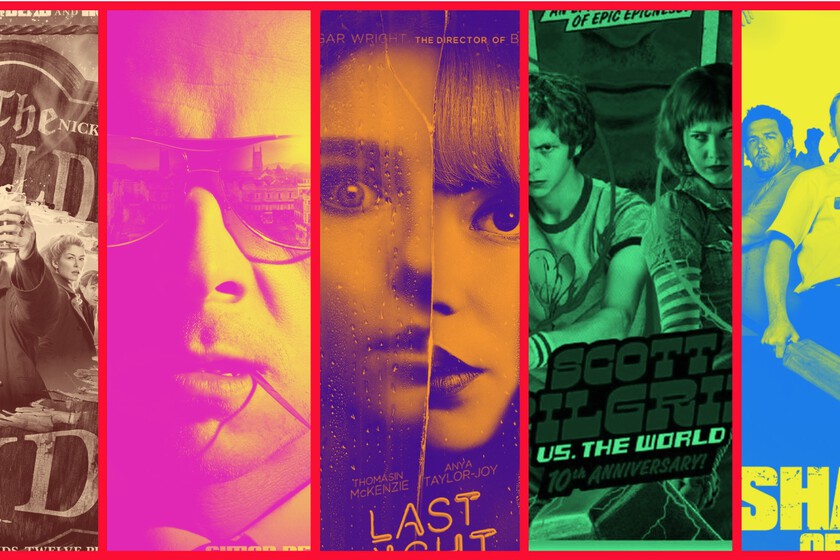 Our favorite English, the Tarantino of Brexit, the king of comedy and montages at a thousand an hour returns for the second time in a week with the expected ‘Last night in Soho‘, a supernatural thriller which has won over critics and audiences, at least in Spain.

Edgar Wright always on my team

With my beloved ‘Spaced‘and an immaculate first four feature films, Wright easily became my favorite movie director of the last 20 years. Then he started to waver, but the credit remains thanks to his sensational documentary on Sparks. But let’s go step by step and start with the worst movie (actually the least good) of his career.


Edgar Wright’s great success came with your work more accessible, harmless and, for the first time, tacky. The revolutionary director of yesteryear came out in spite of his work at Marvel and he removed the penalties with a routine film that ended up falling in favor with the average viewer. That spectator who does not know the true power of a good work by the director, until then, more refined of our days.


It is possible that the director of one of your favorite films is in full midlife crisis more than in a creative one, but it is difficult to enter the game that it proposes. It costs because we start from given circumstances that visually are a bit of an afternoon movie, even if then put the machinery to work and offer complex composition games.

It is bundled with the excess of a footage composed of an overdose of London races to nowhere. Sure the guy he knows how to stick me to the armchair just when I want to look at the time, and that is appreciated, and although the closing is not entirely satisfactory and he plays to the limit of vulgarity for the first time in his career, at times he makes me remember the Amicus or the Ealing.

Review of ‘Last night in Soho ‘in Espinof.

A Fistful of Fingers


‘A Fistful of Fingers‘is a mind-blowing Far West lounge much more appreciative than a bad night in Soho. There is more risk, desire, wisdom and personality in Wright’s debut than in his last two feature films. Edgar Wright’s British Blazing Saddles is a really funny comedy who does not weigh (too much) his amateurism. To discover.

Edgar Wright got good characters in a movie of his, what happens is that in this case they are real people. Real and amazing people. People who give us one of the great movies of the year through its history.
‘The Sparks Brothers’ es a lifetime’s work of a fanboy when it comes to spreading his enthusiasm.

Review of ‘The Sparks Brothers‘.

Zombies Party (Shaun of the Dead)


Edgar Wright’s first masterpiece may be my least favorite. Not because of exhaustion, because it is not exhausted. It’s because I think it’s his humblest movie and I like it Spectorizar everything. But what else will it give when a comedy is perfectly scripted and technically irreproachable. It reminds me of ‘Wayne’s World’ (Wayne’s World): you laugh while you can only admire it. Welcome to the five-star section.

Welcome to the end of the world


Perhaps at first, especially almost ten years ago, someone might have thought that time would end up playing against this triumph of the essence of the human being. If that is so, you were completely wrong.
Edgar Wright shoots with 20 million dollars a colossal sci-fi epic full of dialogue like house brand machine gun bursts that come face to face with the value of friendship, maturity and the goal we have in life. If the million thing has made you crazy, I’ll tell you that ‘Fatal Weapon’ (Hot Fuzz cost NINE). The most emotional and imaginative film of a colossal filmmaker.

Review of ‘Welcome to the end of the world‘.

Scott Pilgrim vs. the world

Monumental, mammoth, irreproachable work. Authentic classic of the future and what should have been a before and after in commercial audiovisuals together with the other masterpiece of the millennium: ‘Speed Racer‘. Here Wright succeeded transfer the narrative of the comic through the language of the video game. Such a tremendous combo that there are still movie theaters with traces of cerebral cortex stuck to the speakers. A masterpiece so advanced that the video game came later.

Review of ‘Scott Pilgrim vs. the world‘.


Hot Fuzz is special. As a comedy, it is perfect: the timing, the recurring jokes, the marked dialogues, the replies and the physical humor shine at 200%. As an action film, it is extraordinary: frenzied chases, shovel point shooting and brutal fights.

As an English country horror thriller, it’s outstanding. ‘Fatal Weapon’ is the masterpiece of a director you need to stop drifting for all audiences and go back to phlegm. One of those few movies that I could see every day and with each viewing catch a joke that had escaped me.
Eternal masterpiece.

All Edgar Wright movies ordered from worst to best