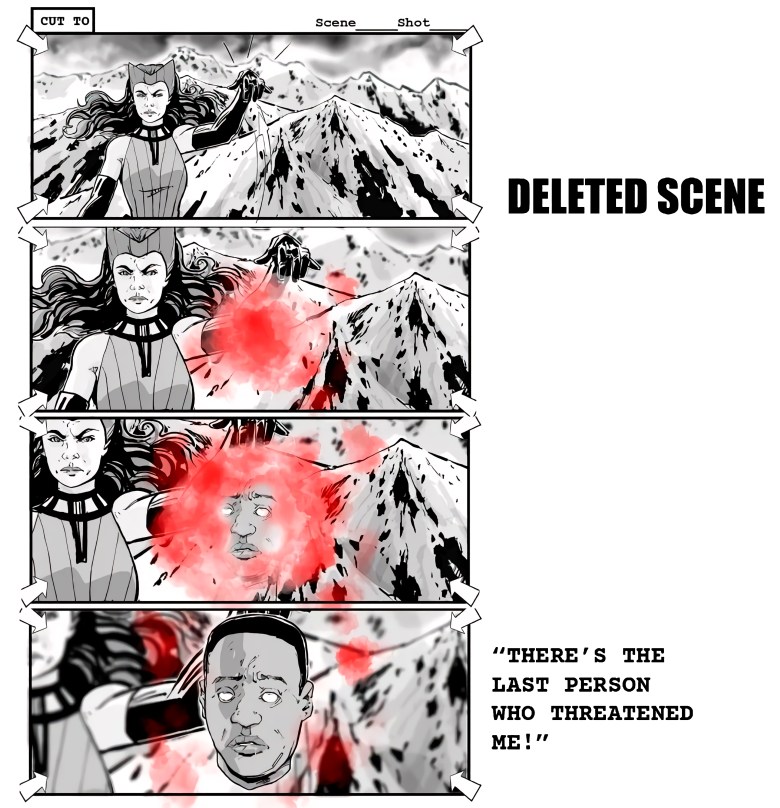 There is not too much doubt about which scene of Doctor Strange in the Multiverse of Madness we would choose as the most brutal of all. The One Where Elizabeth Olsen’s Scarlet Witch Breaks In in the illuminati headquarters from Earth-838 and kills them one by one during their brief confrontation. Except for the sole survivor: Baron Karl Mordo. Because he doesn’t get to confront the ruthless villain corrupted by the Darkhold, of course. If not, she would have ended the same way.

Perhaps “brutal” is an adjective not often used for the Marvel Cinematic Universe. But sam raimi, with his bloodthirsty filmography, was in charge of the second feature film starring Benedict Cumberbatch’s sorcerer. Also, screenwriter Michael Waldron was inspired by a terrifying adventure of james cameron to write that scene. And now we know that, to insist on this feature, neither would the character of Chiwetel Ejiofor have remained standing according to the original plan.

But not because of what you think. In fact, not even we mean to the Mordo that is part of the Illuminati, but to the one that they presented in the first filmmade by Scott Derrickson. I mean, to that of Earth-616that of the universe that corresponds to the main story of Marvel superheroes. A story board of jeremy simser to which we have had access now shows us the terrible moment in which we learned of his death. For the initial section of Doctor Strange in the Multiverse of Madness.

As explained by Sam Raimi himself in the audio commentary of the digital edition of the filmMichael Waldron had envisioned another early scene with the first Mordo. “I had been through a lot of battles,” he says. “I was limping. And he was after the Scarlet Witch to take the power from her because he knew she was dark and [estaba] terribly corrupted by the Darkhold. Y she killed him and cut off his head and showed it to Doctor Strange in a later scene.

Another brutal moment. “It was great writing, but slowed the start too much so we had to lose it”, says the filmmaker to justify its elimination. “Yeah, that was a fun scene that just didn’t fit in the film,” acknowledges the screenwriter of Doctor Strange in the Multiverse of Madness for your part. “but it was great that she cut off his head right in the middle of the ears, [cuando] I was about to say: «everything takes its toll»”. These two are perfect for each other.

Taunting the threat of the sorcerer baron

But it’s about the same phrase that bite pronounced after the death of the old man. “The Dark Dimension is volatile, dangerous. What if he had possessed her?” he asks the future Sorcerer Supreme. And, shortly after pointing out that the late leader used her to prevent her aging, he adds: “Everything takes its toll. Can’t you see it? His transgressions drove the fanatics of Dormammu. Kaecilius is his fault! And here we are, in the aftermath of his deception: a world on fire.”

This great disappointment that he suffers would lead him down the dark path that we are shown in the post-credit scene. With the intention of taking away the powers of all sorcerers for being “against nature”. And it seems very possible that he found out what the Scarlet Witch had been up to in Westview during WandaVision, and for that reason he wanted to do what he considered his duty. But he was no match for her, and his beheading would cause a very black counterpoint to the threat of his sentence.