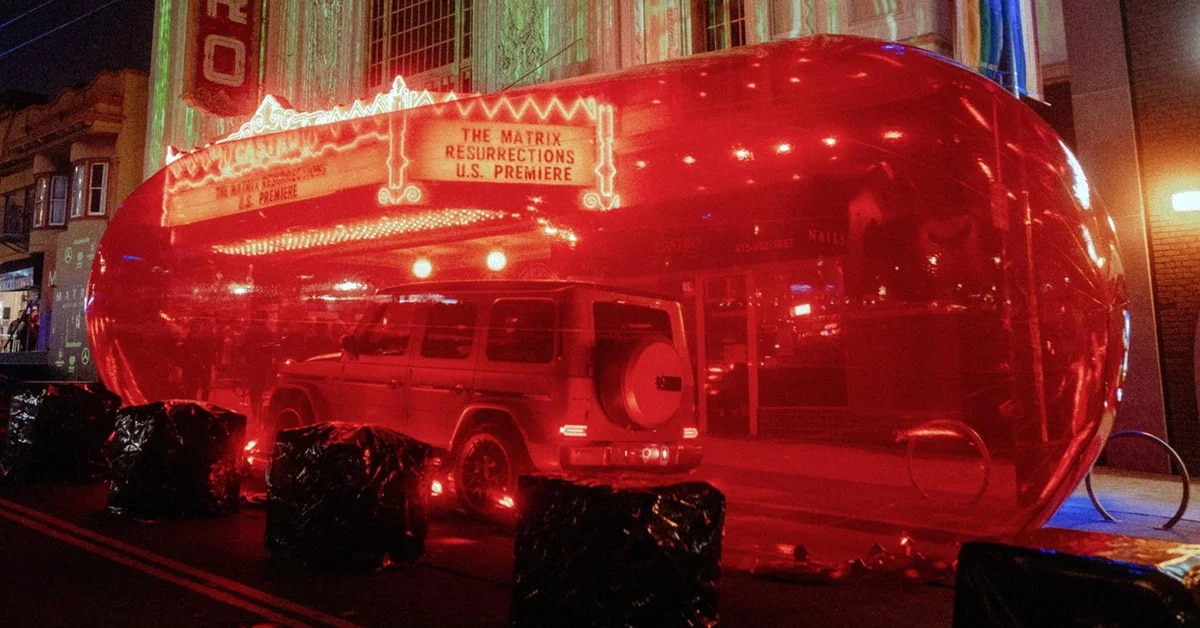 Pthey roasted 20 years since Neo y Trinity they will don their black leather suits for the last time to enter Matrix. But Keanu Reeves Y Carrie-Anne Moss have returned for the fourth installment of the saga, which hits theaters these final weeks of 2021 around the world, with Matrix Resurrections.

Last weekend at the Castro Theater in San Francisco, the premiere of the new film was made and as it is a saga, there were a detail that the producers used very well to attract attention of all. Mercedes brought a huge red pill with a Mercedes AMG-G 63 inside.

The AMG-G 63 inside the red pill, representing life as it is. Difficult but exciting

For those who do not know the history, it has to be said that the red pill in the Matrix has a very particular meaning. When Neo (Reeves) wakes up from his artificial life thanks to Morpheus, it gives you two alternatives: one blue pill that meant to keep seeing artificial life, smoothly, full of conformity; and one the red pill that was the representation of waking up and seeing life as it is. Difficult and complex, but at the same time much more exciting.

That was Mercedes’ idea to associate the AMG with the red pickup, since the SUV off-road is the protagonist of the film in his version G 550, somewhat smaller in performance and size than the one exhibited at the event.

The decision to show a Mercedes G-Class in Matrix, because soon the renovation of this robust 4×4 that was born in 1979 and despite the passage of time, he still has a unmistakable line. The relaunch has to do with the electric version which has already been made official and will bear the name of EQG, in accordance with the EQC. Mercedes uses the letters EQ to refer to its exclusively electric models. It is SUV off-road was presented last September, during the IAA Mobility 2021 and Munich, and will go out to the sale in 2024.

The Mercedes EQG presented as a concept at the Munich Motor Show IAA Mobility 2021, shows the concept for the renewal of the current car called AMG-G 63

But just because it is an electric vehicle does not mean that it renounces its off-road capabilities. The EQG will retain its stringer chassis, independent front suspension and rigid axle rear. The EQG will have four electric motors and each of them will control individually one wheel, which will allow a distribution of the optimal torque off-road driving. Additionally, even if it is electric, the car will continue to have a two-speed gearbox. One of the gears designed specifically for the off-road performance. The other will be one long gear for less extreme traffic.

In addition to modifying the civil version, the German brand recently introduced a new G with military specs in the form of a W464 designed for government and military agencies, designed for rescue operations and special expeditions.

Arrival: the new Uber vehicle designed to be shared
The rally’s most iconic “thoroughbred” car already has its electric heir
How Much Will Bill Gates’ New Venture Benefit Electric Cars?