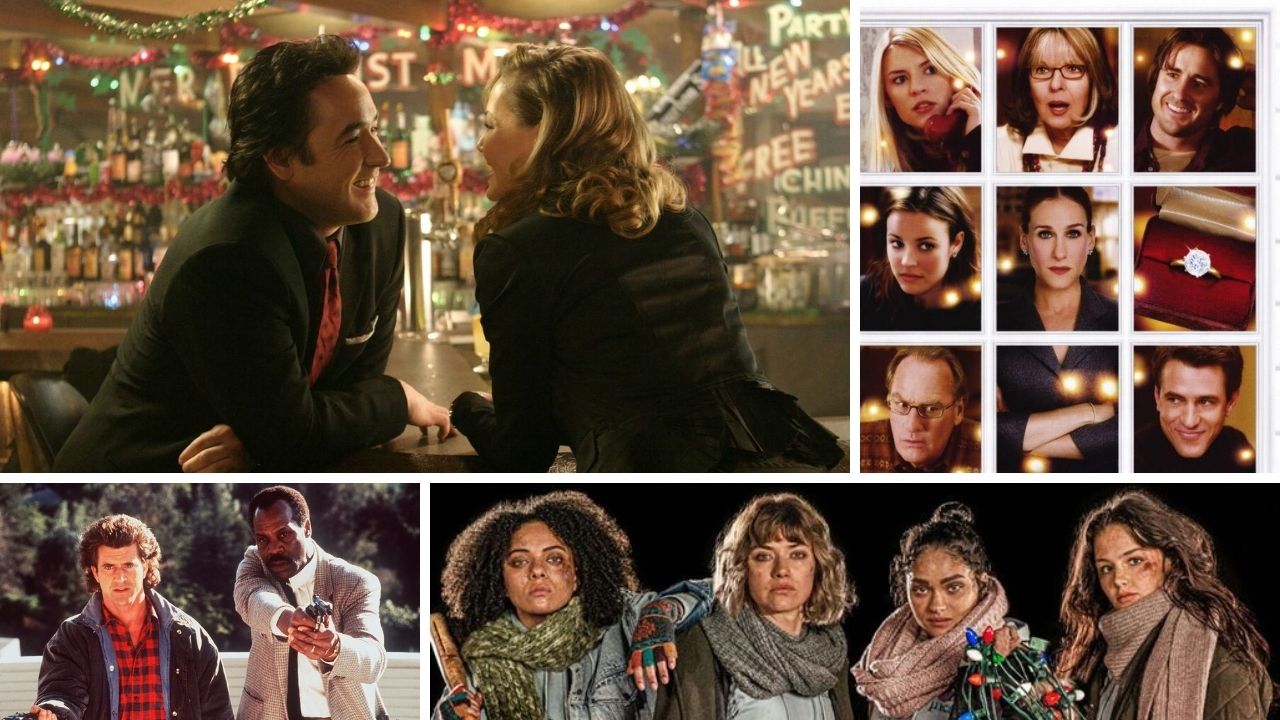 It is very nice to sing Christmas carols by candlelight while watching the snow fall through the window .. Or not? If none of this suits you, skip the typical films of this time and try these recommendations.

Christmas has a problem. In the same way that there are people who adore her and wait impatiently for Halloween to pass to be able to put the tree and the lights, there is a whole group of people who cannot bear to see even the tray of polvorones that grandmother takes out after the meal. This is so, Christmas can be a horrible time for many people and, as always happens, the cinema has the solution.

If you are one of those who does not want to listen to ‘We Wish You A Merry Christmas’ one more time, if you disappear from the typical family gatherings of this time like a ninja and if you have not taken a bite of Suchard’s tablet that he bought Your mother three weeks ago, we have selected the perfect titles for you to spend the holidays in the best company possible: John McClane, Willie Stokes, Roger Murtaugh and Martin Riggs and many more.

Here we leave you with 8 anti Christmas movies for those who hate these dates.

Bruce Willis already said it. Die Hard is not a Christmas movie, but as this tradition has been going on for many years, who says you can’t enjoy John McClane’s adventure on these special dates? It is an ideal film for those who adore Christmas traditions as well as for those who hate them. Like the first installment, The Jungle 2: Red Alert is a perfect film for anti-Christmas.

It begins on December 24, just two years after the events of its predecessor, when our favorite hero waits for his wife at the airport. As is usual in McClane’s life, the day gets complicated and ends in the middle of an operation to catch a gang of drug traffickers.

Perfect to watch with: your father.

If your mood is blacker than coal, Ice Harvest is the best option for you to watch this Christmas. Directed by Harold Ramis -yes, the mythical ghostbuster and director of Trapped in Time or A Dangerous Therapy-, the film surprises as a pleasant comedy for the hardest of hearts.

It tells the story of Charlie Arglist, a mob lawyer, and his friend Vic, who have just stolen $ 2 million from a mob boss. His plan to escape the city is postponed after a storm blocks all exits. This gives Charlie time to visit Renata, a stripper he has been in love with for a long time. All of this happens on Christmas Eve, a night the protagonist will never forget.

Perfect to watch with: your brother / sister

‘The Day of the Beast’

If Álex de la Iglesia made the best anti-Christmas movie almost three decades ago, that’s all. The day of the beast could not be missing from this list and, whether you are one of those who sees it every year or one of those who has it on the to-do list, this year is perfect to let yourself be carried away by its satanic comedy.

It focuses on Ángel Berriatúa, a priest who believes he has found a secret message that indicates that on December 25, 1995 the Antichrist will be born in Madrid. He is convinced that he must prevent this event and joins a metal fan to find the place where it will take place. There are few films as authentic as the one made by De la Iglesia at the beginning of his career.

Perfect to watch with: your grandparents

Action is the perfect genre to escape from the indulgence of nougat and polvorones that we live in this time and, what film is more mythical than Lethal Weapon? The pairing of Martin Riggs (Mel Gibson) and Rober Murtaugh (Danny Glover) is hard to beat. The first installment takes place in December and ends with the protagonists celebrating Christmas together, but it works perfectly as an anti-Christmas tape.

Seeing the agents collaborate in police cases between chases, shootings and friendly complicity will make you forget that we are celebrating. The chemistry between Gibson and Glover started a franchise that garnered a large number of fans around the world. So, if you’ve been wanting more, you have three more installments of the saga ahead of you.

Perfect to see: with yourself.

What better plan to escape from everything that surrounds these dates than to sit on the sofa to see “a scary one”. Bloody Christmas shows that these days not everything is magic, and that sometimes the holidays can play a trick.

The film directed by Sophia Takal, and starring Imogen Poots, follows a group of college friends, who have decided to stay for Christmas at their student residence. The great plans they had for these days of endless fun are truncated when they discover that a masked stranger has proposed to end the lives of each of them.

Perfect to watch with: your friends, cousins, sisters …

If you have been visiting shopping malls with your children, nephews or grandchildren in search of a photo with Santa Claus since December 1, you probably do not want to see the adorable Santa less than two meters away, or even imagine him revealing himself to a child tired of hearing so many requests. If you feel identified, your perfect movie for this Christmas is Bad Santa.

Starring Billy Bob Thornton, the film follows Willie, a man addicted to drink and with little enthusiasm for life, who works every Christmas disguised as Santa Claus in shopping malls. Together with his inseparable companion Marcus, who dresses as an elf, on Christmas Eve they turn off the alarm to steal everything they can. This year, Willie fears that his plan will not go as expected when he begins to suspect that one of the security guards at the mall is keeping an eye on them. As if that were not enough, a child appears on the scene who becomes a little nightmare.

Perfect to watch with: your brother in law.

‘The jewel of the family’

Christmas dinners and lunches are synonymous with reunions, laughter, and emotions; but also disputes between brothers, brothers-in-law, in-laws, sons-in-law, daughters-in-law … If you think that your family is the only one that brings up dirty laundry every Christmas, your movie is The Jewel of the Family. A true reflection of those events, showing why you fear their arrival year after year.

Starring Sarah Jessica Parker, Dermot Mulroney and Diane Keaton, the film follows Meredith, a young New Yorker who is preparing to spend Christmas with the family of her fiance, the Stones. As Meredith struggles to fit in to be accepted as one, she soon discovers that this image of a united and perfect family leaves much to be desired.

Perfect to watch with: that member of your family with whom peace has reigned.

We close with Ghostbusters II, another “Christmas” movie perfect for those who hate these dates. The reason for including it in this genre is none other than the fact that the action takes place in the middle of Christmas, between Christmas Eve and the end of the year. So you too can say that you see Christmas titles, so they stop trying to convince you to see the new romantic comedy on duty.

The plot of the sequel directed by Ivan Reitman, begins a few years after what happened in Ghostbusters. Ray, Winston, Egon and Peter are down because it seems that the ghosts have finally disappeared from New York City. In addition, they are still facing lawsuits for their work as ghost hunters. The quartet seems to regain their illusion when an old partner of one of them calls them for help. Your son, a few months old, has begun to experience a series of strange events that could be related to a river of ectoplasm that passes below the city.

Perfect to watch with: the youngest of the house.

8 anti-Christmas movies for those who hate these dates