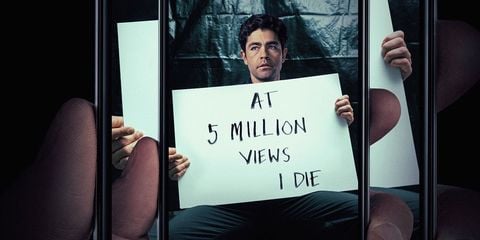 Last end of August in which for many the holidays end and for others they begin. A good moment to rest and relax with one of the series that have premiered this August. Series like the thriller Sentence, the original Clickbait, the emotional U.S, The misterious Wake up and the documentary series McCartney 3, 2, 1.

The new Netflix series stars Zoe Kazan, Betty Gabriel and Adrian Grenier which is being one of the most watched this summer. A story of intrigue that plunges into the complex world of social media and the risks they have. The series begins with the kidnapping of a perfect family man Nick Brewer. Everything gets complicated when a video appears on the Internet that blames Nick for being a female abuser and his loved ones will have to discover the other life of his relative, who has kidnapped him and what are his reasons.

One of the best releases of the summer starring actors Sean Bean (Game of Thrones) y Stephen Graham (Line of Duty). A three-episode miniseries created by Jimmy McGovern (Broken) what se delves into the problems of the British prison system. Before going to jail, Mark Cobden was a respected family man and teacher. His life changes when he runs over and kills a man for driving under the influence of alcohol and is sentenced to four years in prison. There he becomes the target of the most dangerous prisoners and is placed under the tutelage of Eric McNelly, a veteran official in charge of the protection and management of various groups of prisoners.

A new four-episode Filmin drama starring Tom Hollander, Saskia Reeves and Tom Taylor. Count lan emotional and at the same time funny story of the Petersen during their vacations in Europe, where the father, Douglas, tries to win back the love of his wife Connie and reconcile with Albie, his complex son.

Also on Netflix you can see this Polish-produced drama that surprises with its original plot and dosed intrigue. One of the series that aims to become one of the well-known in its country and that tells how after suffering an accident, a young woman with amnesia tries to recover her memory in a specialized center. Soon he begins to suspect the strange treatment that is being applied to him.

Finally, we recommend this documentary series that has premiered Disney+ that talks about two living legends of music: singer Paul McCartney and producer Rick Rubin. An interesting docuseries directed by Zachary Heinzerling, winner of the Emmy Award. In it we see how the well-known singer Paul McCartney sits down to chat with legendary producer Rick Rubin in an unusual gathering. The two will talk about their time with The Beatles, the emblematic rock of the 70s of their band Wings and their more than 50 years as a soloist. A six-episode documentary series that thrills all its fans and explains songwriting and its influences.