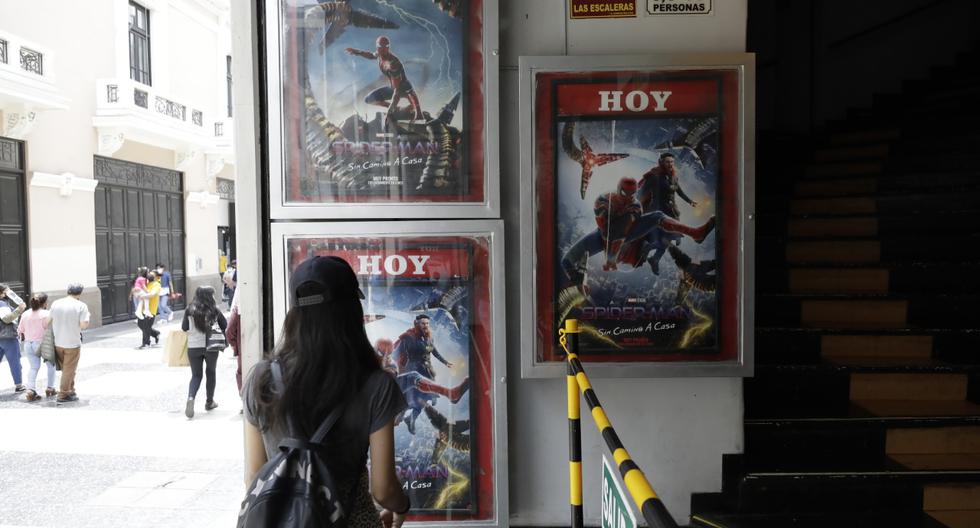 The world of cinema closes this 2021 with Spider-Man everywhere, which multiverse. Which leads us to ask ourselves again: what do we do with superhero movies? On the one hand, there is Martin Scorsese saying that what Marvel does is not cinema, but an amusement park. On the other, a level filmmaker like Paul Thomas Anderson (the best American director of his generation), being less pessimistic about it. “Do you know what is going to make people go back to a movie theater? ‘Spider-Man’. So let’s be happy with it, ”he declared recently.

And he is right. The detail is that the good Paul Thomas has not seen the Peruvian billboard: one in which “Spider-Man” has almost completely monopolized the rooms, preying on decent spaces for any other alternative. Because the problem is not that “Spider-Man” is the most watched movie of the end of the year, far from it. The problem is that it is practically the only film of the end of the year. And that’s what our local scene seems to point to.

ALSO READ: “Matrix Resurrections” learned from “John Wick”: it is the best film of the entire saga | REVIEW

Because after more than a year with the rooms closed due to the COVID-19 pandemic, the reactivation of the exhibitors has started more voracious than ever. Something that the critic Isaac León Frías calls “the dictatorship of the blockbusters.” “I’m afraid the movie screens will still be trapped, as they already are, for a few films distributed throughout the year, and the margins for a cinema other than the one that motivates the highest expectations will be increasingly reduced “He tells El Comercio.

A look with which the film critic Leny Fernández also agrees: “I think that traditional theaters are going to continue, only that they are going to focus on projecting blockbusters, or those productions that can guarantee them a certain commercial success. In our country, we already suffered from this practice before the pandemic, And today, with the movie chains back on the scene, and after the economic downturn for their business, we see how in front of the first Hollywood tank (“Spider-Man”) they have not hesitated to fill their schedules with the projection of this title”.

Fernández warns that, beyond the quality that the arachnid film may or may not offer, the main consequence of this exhibition model is “A rickety billboard on offer” which ends up harming more artistic proposals and, of course, national cinema. “That is why I am afraid that, if a screen quota is not established as soon as possible for the exhibiting companies, the best of Peruvian cinema will not be seen in theaters,” he adds.

Added to this, León Frías mentions another point to take into account: “The blockbuster dictatorship is joined by a second dictatorship: that of dubbing, which spreads mercilessly, and that also reduces the possibility of watching movies spoken in English and other languages ​​as they should be seen: subtitled”.

This strengthening with millionaire mega-productions seems to be the response of the commercial theater circuit to another phenomenon on the rise: streaming. One that with confinement has not stopped growing. “It seems to me that streaming Yes, it has changed the rules of production and distribution for the better and for the worse. Leny Fernández points out. The positive aspect would have to do with the wide and diverse offer to which, as never before, the public has had access. The downside is that, in this content war, quantity matters more than quality. Thus, it is possible to distinguish many times, a ‘way of making cinema’ that is more televised and squeaky, than anything else “.

For his part, Isaac León also considers that the development of platforms will continue to progressively increase, “already turned streaming into the main, and massive, option for the exhibition of films”. Along these lines, he finds an opportunity to expose more local tapes. “Streaming channels appear as an option and I think that a coordinated negotiation by the SWOT, the body that supports production in Peru, is necessary so that the platforms incorporate a larger volume of Peruvian films”, warns the specialist.

But let’s talk about movies, which is what counts after all. Because despite all that has been said, Peruvian moviegoers They were able to rescue some titles to highlight this 2021. For Leny Fernández, the three best films seen in the year were “Annette” by Leos Carax, “All the light that we can see” by Pablo Escoto, and “Claroscuro” by Rebecca Hall.

Consulted by his favorites of 2021, León Frías divides them into two categories: between commercial premieres also highlights “Annette”, and adds to “Cry Macho” de Clint Eastwood and “Maligno” by James Wan; and among the views at festivals and streaming, he chooses “Drive My Car” by Ryusuke Hamaguchi, “The things that are said, the things that are done” by Emmanuel Mouret, and “First Cow” de Kelly Reichardt.

Finally, it is not possible to close this cinematographic balance of the year without mentioning the surprising departure of Óscar Catacora, director of “Wiñaypacha”. “I think it is the event that has marked 2021 for Peruvian cinema,” says Leny Fernández. It’s a tragedy in the human sense, but also because of what our cinema loses in that artistic exploration that he had already traced ”.

The good, the bad and the ugly for …

2021 recap: will “Spider-Man” save theaters or impose his blockbuster dictatorship?