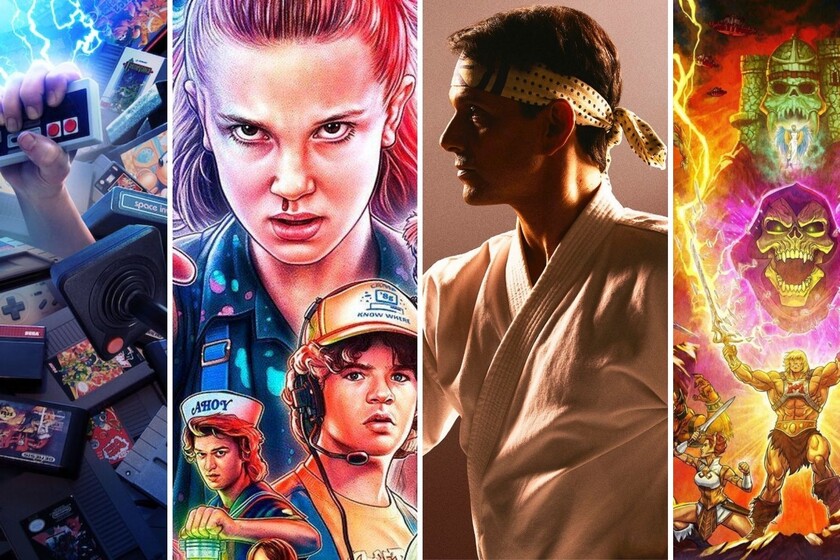 The past is in fashion. The seventies and nineties, but especially the eighties have become a safe commercial resource that platforms like Netflix are willing to exploit. From franchises that were a bit in the trunk of memories to documentaries that analyze why the past continues to fascinate us. We present you 13 movies, series and documentaries on Netflix that guarantee a rush of nostalgia That will leave you murmuring that of “O tempora, o mores”.

It is not the series that started the entire current nostalgia movement in the eighties, but of course, it is one of those responsible for its popularization. We must recognize Netflix and the creators of the series, the Duffer Brothers, the eye to see that the story of a girl with telekinetic powers protected by a group of boys in a typical North American city rang bells from thousands of unlocked memorabilia from 1980s commercial movies. AND this is how ‘Stranger Things’ works: both as a catalog of infinite nods to the time and as a flavored youth adventure vintage. And the fourth season, in a few months.

Masters of the Universe: Revelation

Another monument to the eighties, responsible for the total revitalization of the franchise and which makes clear Netflix’s commitment to the icons of the eighties. In this case, the series has been enthusiastically received by unapologetic fans and with certain reluctance for those who have problems with messing with the canons (Francisco José, attend: they are dolls), disgusted that He-Man disappears from the scene. Nevertheless, is a very powerful reformulation of the classic canon of the series, and visually, the action and the character redesigns are excellent.

The Toys that Made Us

This sensational documentary series has been going on for three seasons now, a total of 12 episodes reeling off the curious stories behind some of the great toy icons of the eighties: Transformers, Barbie, Hello Kitty, GI Joe, Ninja Turtles … With a sense of humor and splendidly documented, they make it clear that large multimedia franchises are very often born as a simple vehicle to sell toys, which helps to put things in perspective. It has an equally interesting if much less eccentric spin-off, ‘The Movies that Made Us’.

The Dark Crystal: Age of Resistance

Absolutely sensational series that serves as a prequel to the classic and influential 1982 Jim Henson film. how the tragic events that lead to the dark, almost apocalyptic state that reigns in the film came to pass, a thousand years after what is seen in this Netflix production. The starting point is less attractive because it starts with the description of a prosperous and happy world that falls apart, but it does not matter: the set surpasses all expectations with a unique mix of traditional effects and exquisite CGI, and creations as memorable as the Skeksis court. One of the best original series in Netflix history and a masterpiece of television fantasy.

Although the Transformers animation series are a real maremagnum where It is difficult to find a way to walk if the kilometer is not minimally known lore of the franchise, this animated series based more on the classic designs of the robots than those inherited from the movies (as is the case with another available on Netflix, ‘Prime’) and full of sequences of monstrous robotic demolition, is a delight. The computer animation suits him like a fable, has an estimable twilight tone and is divided into three miniseries, ‘Siege’, ‘Dawn of Earth’ and ‘Kingdom’

The subject (the origins of different genres and milestones of video games) is so huge that the result is necessarily shallow, and sometimes you don’t know calibrate the balance between the superficial nostalgic anecdote and analyze why these games were important (That which ‘The Toys that Made Us’ does so well). But despite the gaps (zero video games outside of North America or Japan, nothing that are not arcade, consoles or ‘DOOM’) the result is a visual enjoyment and an indispensable appointment for pixel archaeologists.

That Netflix is ​​very attentive to nostalgia trends is a fact that is corroborated by the existence of this series, which was born on the ill-fated YouTube Premium payment platform, becoming its only truly successful series. With the third season already filmed, YouTube decided to cancel it and the producers looked for a new platform: it premiered successfully on Netflix in January 2021, with renewal for the fourth and fifth years. The series explores the Miyagi-Verso facing the ‘Karate Kid’ rivals three decades later, and what seemed like a mere vehicle for self-parody and easy nostalgia turns into a curious drama full of heart and a sense of the memory and milestones of the eighties very peculiar.

The street of terror

Nice trilogy of youth horror films released successively on Netflix and each one not only channels a respective subgenre (‘Scream’, slashers, folk horror), but It does so by reflecting the shameless and urgent spirit of RL Stine’s horror novels for all audiences. in which it is inspired. Without being carried away by the past and contributing its own mythology, which intertwines between the three films in a very interesting way, it is a Netflix narrative experiment that we hope will be repeated.

If all this rosy past is making your blood glucose dangerously close to the risk of cardiovascular arrest, we advise you an anti-nostalgia reality bath with one of the best and most bitter comedies of recent times, in which a Charlize Theron returns to the town of her youth to win back the love of her life. A starting point of pure rom-com from a couple of decades ago, which becomes a diatribe against banal memories and the mythologization of the past that leaves with frozen laughter.

A documentary that tackles the pop music industry, but often looking back at the past, that is, digging into the roots to try to understand what characterizes the music that becomes a worldwide success. ABBA, brit-pop or Boyz II Men, among many others, star in a series perhaps too lost between glamor and stars, but which releases a few clues for students of nostalgia and why hits are so often recovered from decades ago.

One of the mythical toys of the eighties, the Rubik’s cube, is the excuse for a documentary about the game’s quick-solve competitions. Two friends, world champions of the cube, develop a healthy rivalry that also has a special component, because one of them has an autistic disorder. A documentary about overcoming obstacles, whatever they may be, and that uses one of the most timeless puzzles in history as an excuse.

The Mitchells against the machines

A gem of animated family adventures bathed in the unmistakable spiky humor of the producers Phil Lord and Christopher Miller, writers of ‘The LEGO Movie’ and the superb ‘Spider-Man: A New Universe‘. That is, experts in the power of memories and the past, and how to reconfigure them so that they remain just as powerful. In this case, a family trip and a confrontation with an artificial intelligence of crazy power are the excuse for a film about leaving the past behind and detecting its mistakes to build a better future.

Not all the nostalgia of the eighties are going to be dolls, comics and video games … there is also wrestling. Specifically the GLOW league of women’s wrestling, a strange setting for a story of empowerment and vindication magnificently performed by Alison Brie and Betty Gilpin. Sensational setting, especially unraveling the murky goings-on of the cable TV industry of the time. Unfortunately, it was canceled before we could give us a final season that closed its story, based on real events.