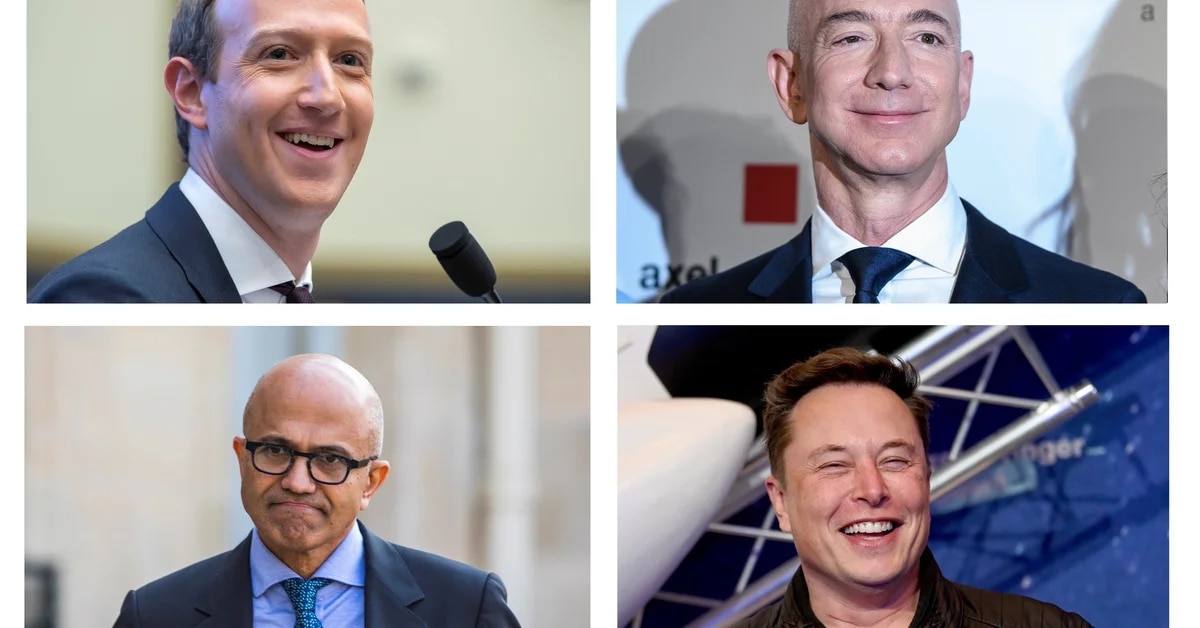 
Company founders and leaders are selling their shares in historic numbers, some even trade them for the first time in years, in the middle of rising market valuations and before that possible changes in the tax laws of the United States and some states of the North American country.

So far in 2021, 48 top executives have earned more than $ 200 million each from the sale of shares, almost four times more than the average number of insiders from 2016 to 2020, according to an analysis of The Wall Street Journal from data from research firm InsiderScore.

Among the businessmen who agreed to sell their shares are the cosmetics billionaire Ronald Lauder and the co-founders of Google, Larry Page and Sergey Brin, who have marketed them for the first time in four years or more. The walton family, heir to the Walmart Inc. fortune, and Mark Zuckerberg, CEO of Facebook parent Meta Platforms Inc. have accelerated sales and are on track to break recent records for the number of shares sold.

Across the S&P 500, insiders have sold a record of $ 63.5 billion in shares through November, an increase of 50% compared to the whole of 2020, driven both by the stock market gains such as increased sales by some large holders. The technology sector has led with $ 41 billion in sales across the market, an increase of more than a third, with a smaller amount but an even larger increase in financial services.

Daniel Taylor, a professor of accounting at the Wharton School of the University of Pennsylvania, told The Wall Street Journal that 2021 is the year with the most sales by insiders in a decade, which resembles the waves during the dot-com boom in the early 2000s.


Investors are sometimes concerned that large insider sales mean no further major increases in stock price are expected, and large, unexpected sales may weigh on stock prices. Companies often require senior executives to have stakes equal to several times their annual salary, but many high-profile executives easily exceed those thresholds even after selling.

Executives are not required to say why they sold. The biggest sales came as Washington lawmakers debated possible tax increases as part of the Democratic legislative package. Build Back Better (Rebuild better), sometimes considering the possibility of increase the tax rate on long-term capital gains. In November, investors sold for $ 15,590 million.

The legislation, pending approval in the Senate, imposes a 5% tax on adjusted gross income over $ 10 million as of 2022, and another 3% on income over $ 25 million, including capital gains from the sale of shares. Congressional revenue estimates assume that taxpayers will accelerate capital gains in 2021. Wealthy taxpayers could save up to $ 8 million in taxes for every $ 100 million of shares sold before the effective dateTaylor told The Wall Street Journal. This potential tax savings has been “a powerful incentive to sell this year,” he added.

Elon Musk gestures during a visit to the Tesla production plant in Gruenheide, Berlin (Patrick Pleul / Pool via Reuters)

The CEO of Tesla Inc. Elon Musk, considered the richest person in the world, with a net worth of about 270,000 million dollars, sold more than $ 10 billion worth of Tesla stock in about a month – including about $ 4 billion to cover withholding taxes on options exercises – in his first sale of company stock since 2010.

For his part, the CEO of Microsoft Corp., Satya Nadella, sold last month half of its total stake, for about $ 374 million before taxes.

According to The Wall Street Journal, about a dozen high-profile founders and CEOs sold million dollars in company stock this year after not having sold any in all of 2020.

Page and Brin last sold shares of Google parent Alphabet Inc. at about $ 800 a share in 2017, according to InsiderScore. When they returned to the market in May, the shares had risen to $ 2,200. This year, each of them has sold almost 600,000 shares for about $ 1.5 billion before taxes. Each of them still owns about 6% of Alphabet, according to FactSet.

Sales of both occurred when the company reported record revenue and profits doubled from the previous year, and seven months after the Justice Department and state attorneys general filed a civil antitrust lawsuit against Google. The company’s share price hit an all-time high of $ 3,019.33 on Nov. 19, and has since fallen to about $ 2,950.

Lauder, son of the founders of Estée Lauder Cos., Sold two million shares this year, for more than $ 600 million before tax on your first sales since 2016.

The Walton family quadrupled the number of shares its members sold, and received $ 6.5 billion before taxes so far in 2021, from $ 1.5 billion in 2020. Sales occurred in a year in the one that Walmart’s stock price approached all-time highs, and the company posted higher sales in three quarters.

Zuckerberg increased the number of Meta shares he sold nearly seven times over a year ago, raising almost $ 4.5 billion before taxes. Its sales occurred when the company reported a sales and profit record.

Entrepreneurs often sell their shares under Advance trading arrangements, called 10b5-1 plans, that trigger sales on a fixed schedule or at price thresholds to avoid conflicting with insider trading rules. The plans were used in nearly two-thirds of share sales last year – up from 30% in 2004 – but some investors and regulators worry they could be abused, according to The Wall Street Journal. The Securities Market Commission plans to vote next Wednesday on a proposal that would change the rules governing trading plans.

Rising stock prices mean that some executives raised the same amount of money, or more, by selling fewer shares. The CEO of Snap Inc., Evan Spiegel, set a price target to sell between $ 60 and $ 80, receiving a total of $ 710 million pre-tax for 10 million shares – more than double what it raised in 2020 despite selling three million fewer shares.

The founder of Amazon.com Inc., Jeff Bezos, he usually sells some $ 10 billion in shares a year to help fund your space venture, Blue Origin LLC. This year, he has sold a 25% fewer shares while raising roughly the same amount of money before taxes because the company’s stock price has doubled in the last two years.

Elon Musk sold $ 5 billion worth of Tesla shares after his Twitter poll
Facebook shares plunged as much as 6%: Mark Zuckerberg lost $ 7 billion in two hours
Tesla shares fell 12% to their worst performance of the year after Elon Musk’s poll on Twitter