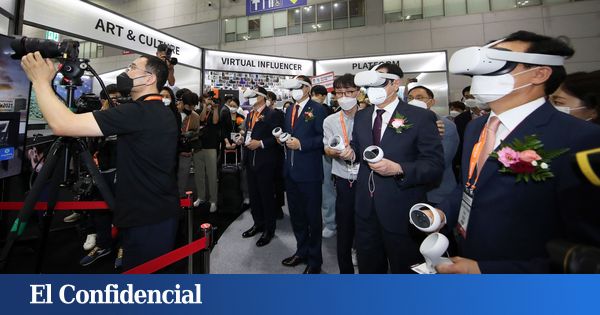 Facebook’s interest in the metaverse has put this word on everyone’s lips, although it is such an abstract concept that, for many, it is the very idea of ​​the internet. In addition, Mark Zuckerberg’s proposal does not have much to do with what those who have been advocating for these platforms for a long time defend, who put decentralization as a ‘sine qua non’ condition. Its future is unpredictable, but it is clear that there will be a key element for its operation: the world of cryptocurrencies and NFTs (non-fungible tokens).

“This new conception is a technical word but it is something that previously exists, because we can speak of a metaverse since the internet exists,” says José Antonio Bravo, an economist specializing in cryptocurrencies. As indicated, these platforms are spoken of “as if they were a meta-universe”, but it is something that is far from what exists today: different platforms, generally related to the world of video games, and with little or no connectivity between them. “Today is a very fragmented world and what Facebook proposes is one of many possible metaverses.”

Be that as it may, these metaverses need an internal economy, and this has to be endowed with a cryptocurrency that allows it to operate in its markets. It’s something that it is said in a sentence, but it is extremely complex (especially if you want to do it in a decentralized way).

Second Life, the platform that many think of when talking about metaverse, had the ‘linden dollars’, a currency controlled and issued by the developer Linden Labs. That is, centralized, as in the case of FIFA, where the currency is also controlled by the study EA Sports, but the market does not even exist. But that would not be the case in these new metaverses, something that entails certain challenges for them to move forward.

“Now the concept of decentralized currency issuance, which created Bitcoin, has been introduced for their economies,” explains Bravo, who indicates that the key is its significance beyond the game itself. “First, it must be an exchangeable currency in the real world, and then it must be stable or growing over time, otherwise it will have no value in the real world. Inflation cannot be higher than the growth of activity on that platform ”.

Bravo considers that this is where it is “The great difficulty of metaverse economies”, because “it is difficult to maintain the price of a currency that grows continuously and without a clear revision.” The opposite can also happen: that there is a greater supply than demand for these currencies, with which “people would want to sell them and they would lose their value and usefulness”. This can be solved by increasing the demand for these currencies, so that “people are made to spend them in the game with an internal economy that feeds it thanks to the constant attention, but it is something very complicated, almost practically impossible ”.

How to Design the Metaverse ‘Tokenomy’

David Noya, a computer engineer and ‘crypto’ disseminator, is more optimistic and advocates “circular and feedback” economies of these projects, something for which they have to “carefully design their ‘tokenomy’ [economías de tokens aplicadas al proyecto], since they are no longer merely an application or service, but rather generate a real parallel economy, and that, badly designed, can sink it ”.

This specialist emphasizes that “there is nothing that guarantees that an economy will work for a long time and in any situation”, but it is possible to put wickers to make them stable. For example, maintain interest through profit sharing among its users, so that greater long-term involvement is favored. It is what is called ‘play to earn’ [juega para ganar], popularized by Axie Infinity, the best-known ‘crypto’ video game in the world, which is already in its third year of life, although 2021 has been when it has finished sweeping.

Noya, a user of this platform, considers that there are several keys to its success. The first, that does not depend on any central. “Sky Mavis, the company behind Axie Infinity, cannot generate or issue Smooth Love Potion (SLP), the currency of the game, but it is the players themselves who generate it through their interaction, avoiding the centralization of the economy,” he says. . In addition, there is “a balance in generation-destruction of SLP that prevents hyperinflation ”, since to create new creatures a quantity of coins is needed that disappear after fulfilling this task.

In this sense, it contrasts what happened with traditional video games, “in which developers create content and players pay for it.” “Now there are ways to generate economies controlled by all those who use it, and not just by central entities. If the game works and goes well, everyone wins”, He defends.

Miguel Rubio, a cryptocurrency specialist and director of the newsletter of the consulting firm Carbono, points out some risks for these metaverses, especially when they are in an incipient phase. “Volatility is inherent and there can be an exaggerated demand. It must be taken into account that all types of audiences can enter, people interested in the project, but also investors more focused on speculation, because they are pure and hard market laws ”, he warns. “It is about encouraging both those who create value and those who do ‘trading’, but without them loading the project because, for example, make the token go up a lot and then knock it down to sales ”.

And it is that videogame studios can no longer dedicate themselves to designing only their mechanics, but also “they have to establish a discipline of token engineering with its rules, something for which they are needed. highly complex financial knowledge”.

The other great challenge of digital universes

A key point in these new platforms are the NFTs that, Rubio says, “are building the foundations of a new digital identity and management of digital properties”. “If you bought an authentic painting, an institution would give you that certification, but the NFTs attribute it to you in a decentralized way, with a community that congregates around the ‘blockchain’, which is public and transparent ”, he explains.

The first of these blockchains – its closest translation in Spanish – was Bitcoin, which allowed the exchange of homonymous cryptocurrencies and recorded the different balance sheet transactions. Later, more complex ones have been developed, going from the so-called fungible tokens –as the currency mentioned above could be– to the non-fungible ones, better known as NFTs. “Fungibility is the property that any asset that you want to use as a unit of change must have so that, for example, The euro that I have in my pocket is worth the same as you have”, Explains the engineer and disseminator Noya.

In contrast, later ‘blockchains’, such as Ethereum, enable so-called ‘smart contracts’, which add “programmable logic to those transactions” and enable the entry of NFTs. This specialist highlights that it is not just about crypto artists being able to sell their work, but that they have opened the door to “the tokenization of many other assets, digital or physical: from weapons in video games to renting a flat ”. In fact, it is in the ‘gamer’ world where they most seem to penetrate for now.

“It has allowed players to really own the assets we put so much time and effort on,” celebrates Noya, who considers NFTs “the necessary key” to implement the metaverse: “Without NFT, the metaverse would be meaningless”.

How to take NFT from one metaverse to another

This is where another of the main challenges for the future of these metaverses appears: interoperability between platforms. That is, if you have an asset on one platform, you can use it on another. In fact, brands like Adidas or Nike have already announced that they will fully enter a sector and they will start selling digital clothing that avatars can wear. “Interoperability is a fundamental and unquestionable part and the foundations already exist, but there is still much development to be done,” says Rubio, from the Carbon consultancy.

The NFTs work through two standards (ERC-721 and ERC-1155), although at first “many developers were creating the NFTs in different ways at a technical level, something that generated a lot of entropy,” says Noya. “Now there are ‘templates’ that implement the ‘skeleton’ of an NFT, although later you can add certain specific details or metadata that you may need ”. In this sense, he highlights that “the challenge lies more in putting the developers and their communities in agreement than in the technical part”, something that would be easier if everything is done within the same blockchain.

Right now, you can sell an NFT of the game through a marketplace like OpenSea, but it is much more complicated to take it to a different metaverse, especially when it has an associated utility (for example, a vest that provides certain skills on a platform) . The economist Bravo focuses here another of his criticisms, since “it is very difficult to move from one ecosystem to another and that they continue to retain their value”. “You would have to create a certain equivalence between characters and everything is in a very primitive state. I see it as very utopian to speak of a metaverse at the moment ”, he asserts.

Metaverses can end up taking very different forms as questions like these are solved and the shadow of the Second Life bluff is elongated, although there are substantial differences both in their concept and in the moment in which they arrive. In the background looms the great doubt: will anyone achieve the highest goal and become a digital replica of the real world? “We don’t have to stay with the hype, which is very dangerous. Must distinguish smoke from reality, and that is always something complicated “, advises Bravo.

Why the key to the future of the metaverse will not be Facebook, but cryptocurrencies