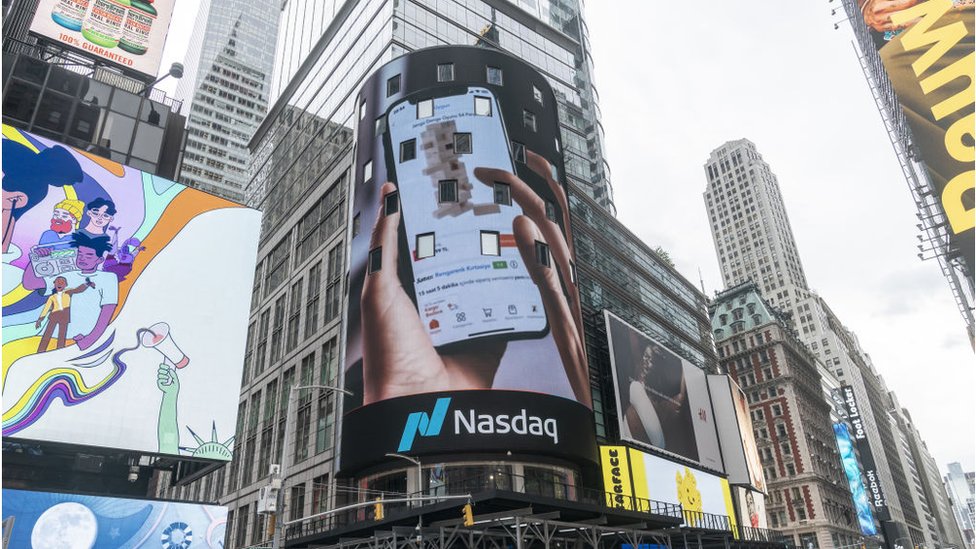 After the spectacular gains it had in the pandemic, the stock market has been recording a bad year 2022.

Investors suffer losses, even those who bet on safe securities such as those of technology companies, which had years of prosperity. Until now.

In midtown Manhattan, surrounded by the lights and electronic billboards of Times Square, is the Nasdaq, the stock exchange that specializes in technology companies.

In the first five months of the year, the Nasdaq index – which reflects the ups and downs of the set of shares traded on that stock exchange – fell almost 23%.

And in June the scenario has not improved.

“It is one of the worst falls that the Nasdaq has had in its history”notes Eduardo Carbajal, professor of Economics and Finance at the Technological Institute of Monterrey, in Mexico.

And the so-called “big tech” – such as Meta (parent of Facebook), Amazon, Netflix, Apple and Alphabet (parent of Google) – have not escaped either, suffering percentage declines of more than double digits.

The markets are volatile. The mood of investors, what they expect to happen in the future, is what determines share prices on the stock market.

And this year, the trend has been to get rid of those assets because they understand that they will not have the expected return.

“My hypothesis is that there was a overvaluation of many technology companies,” says Carbajal.

“It is not possible that Tesla had a higher market value than any company that historically produced cars,” he adds.

There are several factors that influence the current spirit of investors.

The first is the high inflation, a widespread phenomenon in the Western world this year. In the United States, for example, the annual figure stood at 8.6% in June, the highest in the last 40 years.

To try to stem the wave of inflation, central banks are increasing interest ratesa measure that makes money and with it credits more expensive.

In Washington, the Federal Reserve decided to increase rates and the signs it has given indicate that it will continue to do so.

This affects to a greater extent the companies that in recent years took advantage of the very low interest rates to inject bills into them.

“When expectations change and interest rates rise, these shares are usually hit harder than those of companies with more relative weight in indices such as the Dow Jones, of more traditional companies,” Nicolás Max, director of Criteria Asset, tells BBC Mundo. Management in Argentina.

The escalation in the cost of credit has also made investments in US Treasury bonds more attractive, which is why part of the capital moves towards these types of assets, which are safer.

This, in turn, cools the economy and lowers companies’ earnings expectations, making their stocks less attractive.

Both factors added together produce an economic pump known as stagflation: stagnation of activity with a sustained rise in prices.

And when people have less money in their pockets, they tend to spend less on non-essentials.

The lockdowns implemented in China due to covid-19, the war in ukraine and the possibility of new health crises emerging add more question marks to the equation.

“The magnitude of the fall is based on the actions that dominate the Nasdaq with the greatest weight,” says Max.

Although a more traditional one is also among the great ones: microsoft.

“In the first part of the year we saw some drops in profits relative to expectations in very representative stocks in technology indices such as Facebook, Paypal and Netflix,” says Max.

Facebook, Apple, Amazon, Microsoft and Google alone lost $2.7 trillion in market value from the start of 2022 through May 19, according to The New York Times.

That is more than the entire economy of Brazil and Mexico combined.

“They are returning to the probably real levels that share prices should have,” says Carbajal.

And the pulling power that large companies have always puts smaller ones on alert, which end up falling like dominoes.

What may be strange in this story is that, despite the fall of the technology companies, they continue with their wallets open to continue spending.

That is reflected in significant salary increases for your employees this year or even new hires at some companies, plus more investments in projectsUS media reported

“The companies that lead the Nasdaq are quite solid, and when all this happens, they will have a strong recovery power. The proof is in the projects they are developing,” says Carbajal.

Will there be recovery?

Investor sentiment doesn’t appear to have bottomed out yet, and that will affect the share price of Nasdaq-listed companies.

“The question is whether or not the US economy is headed for a recession., how deep the economic slowdown will be and, therefore, how much the profits of companies will slow down going forward. That uncertainty is, basically, the one that weighs”, analyzes Max.

“Should price pressures persist, the US monetary authority will face a scenario where recession is the price to pay for keeping its credibility intact, and stocks will have some way to go in their negative trend,” add.

Why tech companies are suffering historic losses on Wall Street