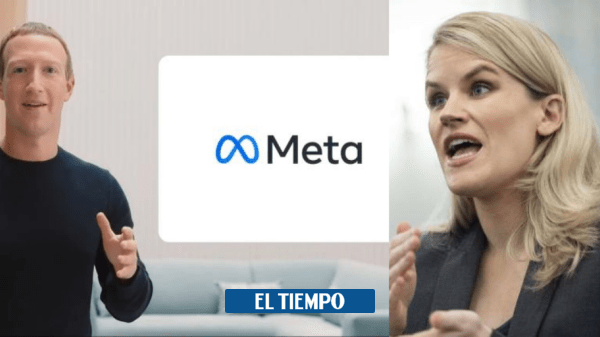 Facebook whistleblower Frances Haugen, who has accused the company of putting its profits before those of users, said Monday in a speech in the European Parliament that she is “very concerned” about the change of the company’s name to Meta.

Also read: How will the metaverse of Facebook be in Colombia?

“It shows a meta-problem because it shows that they want to prioritize growth and profit. With 10,000 more engineers they are going to make video games, but they can’t have 10,000 engineers to work on security. It seems indefensible to me“said the former employee of the company.

The CEO of the company, Mark Zuckerberg, wants to expand his business into the metaverse, a parallel virtual reality universe in which users can interact through an “alter ego”, either for personal entertainment or in the world. labor.

Read on: Microsoft’s vision of the metaverse

“I am concerned that there are more sensors in our homes and offices for the metaverse. Users have to expose a lot and Facebook has shown that it lies whenever it suits it,” Haugen said.

“Filling offices and houses with sensors that are not transparent is a bad idea,” continued the American, adding that, when it comes to the world of work, workers “cannot control the technology used by the employer” at the workplace. job.

You may also read: Facebook will end its facial recognition system in photos and videos

However, Haugen saw positive elements in this parallel universe and that is that “it will work in a more human way”, because it will “with groups of up to ten people”, in such a way that “we can meet with someone who has extreme ideas But we all know him, we know what he is like. ”

Haugen explained that he started working at Facebook because “I thought I had the possibility to bring out the best that we have inside. But I’m here because I think Facebook products harm children, fuel division and weaken democracy. “

In this sense, on the operation of the algorithms that determine the content that users see, he assured that “there are many languages ​​in Europe for which the security system is minimal”, because “supervision systems that are not in English do not they work fine. ”

“I don’t think the problem with Facebook is bad people (…) but to amplify the most divisive or most extreme content, “said the former employee of the technology giant.

We recommend: WhatsApp: the ‘metaverse’ will bring changes in the application

“Facebook is different from other companies. It is less transparent than other large platforms “Haugen said, citing Google and Twitter, and was convinced that the laws that are being negotiated in Brussels to further control these companies “can inspire other countries.”

“The digital services law can be a cry of alarm,” he commented on a regulation that will force digital platforms to provide information to authorities about how algorithms work and to undergo independent audits.

Also: Facebook: a story that is already in the metaverse

Before his speech in the European Parliament, Haugen met with the European Commissioner for the Internal Market, Thierry Breton, and with the rapporteur for the digital services law, the Social Democratic MEP Christel Schaldemose.

The argument that for profit we deliberately promote content that angers people is deeply illogical.

“Obviously, as a platform built around people sharing things they are interested in, content that elicits strong emotions will inevitably spread. But the argument that for profit we deliberately promote content that angers people is deeply illogical. “Monika Bickert, Vice President of Content Policy for Meta, said on the company blog.

It may interest you: How do I know if I am addicted to social networks?

According to Bickert, hate speech they represent only 0.05% of the content that users see and he assured that the company removes 97% of that information “before someone reports it.” The company, he said, allocated $ 5 billion this year to combat hate speech, with a staff of 40,000 dedicated to this goal.

Why is Elon Musk going to sell 10 percent of his Tesla shares?
Step by step: how to get the recordings that Alexa saves?
Exploitation and sexual abuse of children on the internet are on the rise

Why is Frances Haugen ‘so concerned’ about the switch from Facebook to Meta?