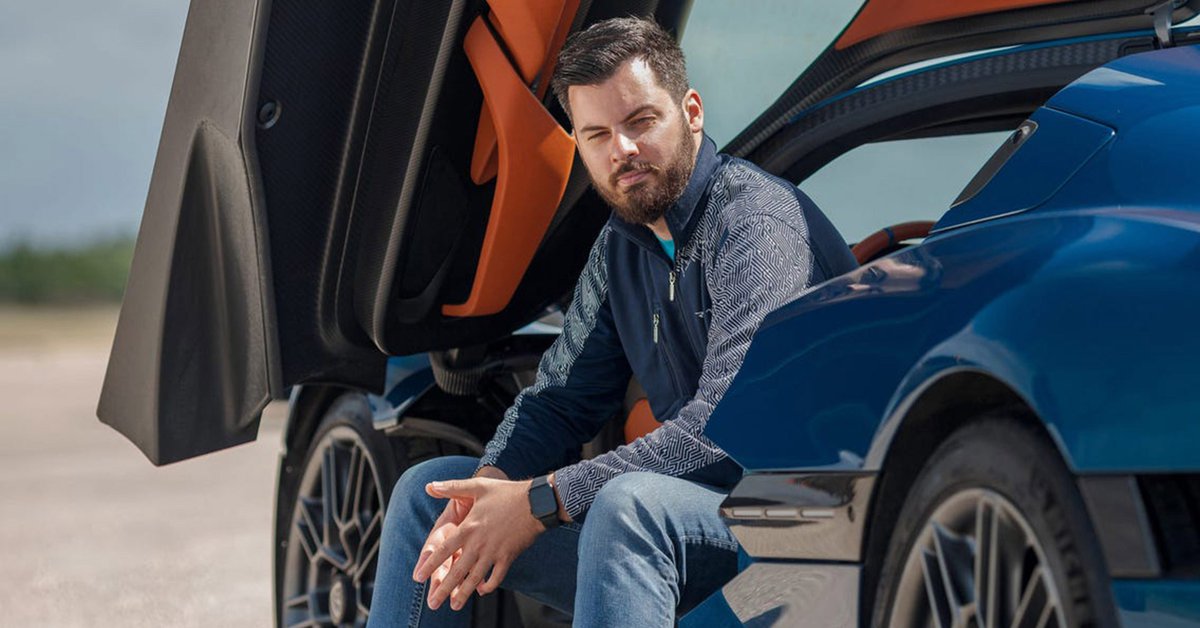 Tweet
Share
Share
Pin
Mate Rimac is only 33 years old, and in addition to being the creator of the world’s first electric hypercar, he is now majority owner of Bugatti

It all started with a glove. Although it was not an ordinary glove, but one that had digital terminals that allowed to be used as replacement of a mouse to power a computer. Mate Rimac, born in Livno, Bosnia Herzegovina, a few kilometers from the Croatian border, possibly he had discovered a way to stay ahead of the future. That glove was the first step to touchscreens with which today cell phones are handled, the menus of car multimedia systems, and everything that just with a finger on a screen, activates a function of an electronic device.

He was curious from a very young age, and had the possibility to be educated in Germany, where he did elementary and high school, before moving to your region again, although now in Zagreb, capital of Croatia, where he did his university studies.

Nevertheless his great passion was cars, with 17 years, in 2006, bought an old 1984 BMW 323i to race in local championships of chopped in Croatia. It did not go very well because the engine of his “Beeme” broke very soon, and then her uneasiness appeared once more. Instead of spending a lot of money to buy a new engine and prepare it, Mate decided that he could try an electric motor, and unknowingly he began to form a true empire.

The Frankfurt Motor Show was the place where it showed its first Rimac Concept_One prototype, and since then, it has not stopped growing

The car was called Rimac e-M3 and had an engine 600 CV. It was not a lukewarm attempt. His car was one of the world’s first electric racing cars, and it was the test bed of the development of which after it would be the first electric hypercar of the planet.

The work took almost four years, competing, developing and projecting a car concept that has never been seen before. Until that moment, Rimac Cars It was made up of two people, Mate and a designer named Adriano Mudri. But in 2010 a golden opportunity appeared. Literally gold. Because interested in your concept car that still had no name, the government of the United Arab Emirates, decided to bet by Mate, and a year later the Rimac Concept_One was presented in the Frankfurt Motor Show, astonishing the sports car world by declaring a powerhouse of 1.088 CV y ​​1.600 Nm of torque thanks to four electric motors. Its battery pack gave it a range of 400 km, an acceleration of 0 to 100 km / h in 2.5 seconds and one maximum speed of 355 km / h.

The first car to go on sale was the Rimac Concept_One, of which only eight exclusive units were manufactured

The sensation it caused and the support it had, generated that very soon, the Concept_One receive a upgrade of power that led to 1.244 CV and in 2014 appeared new investors, attracted by the development of a technology that they would need, and of which Rimac was a forerunner. Electric cars were no longer a fad but a necessity for manufacturers. First was Hyundai Motor Group, which acquired the 14% of total shares of the company. And then came Porsche, which assumed the shareholding of the company in a 15,5%.

The Rimac C_two was the natural evolution of the first Mate Rimac hypercar, two years after showing the first prototype, and with 1940 electric hp

This year, 2021, Rimac launched its third model called Fridge. It is another Hypercar that also has a power superior to the 1,900 hp, exceeds 400km / h and from which they will be made 150 units, Rimac’s largest production so far, since from Concept_One that went out to the street, alone eight cars were made.

The third car is called Fridge, and it was launched this year and only 150 units will be manufactured

Mate Rimac is just 33 years old. The value of your company, which you already have 1,000 employees, amounts to 795 million euros. The stock division has him as the majority owner with a 37% of the company, with Porsche owns 24%, Hyundai 12% and the 27% remaining in the hands of different investors, including the Arab government.

Rimac Automobili is not only a manufacturer of the most powerful electric hypercars, otherwise technology provider of large factories, for their projects of high performance electric vehicles, such as Ferrari, Mercedes AMG, Aston Martin, Jaguar, Porsche and Renault, but also from other manufacturers of hypercars same style, like Koenigsegg, Pininfarina and Magna.

Mate Rimac is an admirer of Elon Musk, and also of the Argentine Horacio Pagani, and of course the most famous Croatian, Nikola Tesla, the master of electricity

The July 10, 1856, in Croatia, Nikola Tesla was born, who at the age of three, while stroking his cat, felt an effect that he did not understand. He asked his father why the cat’s hair stood on end, and his father replied that it was due to electricity. For the rest of your life, Tesla devoted himself to studying electricity as a phenomenon, to make people’s lives easier.

The June 28, 1971, in Pretoria, South Africa, Elon Musk was born. Once received from Physical in Pennsylvania in 1992, he dedicated himself to creating innovations that transformed him into a millionaire. On 2004 I think Tesla Motors, in honor of the Croatian genius of electricity, and became the leader in electric mobility that today is a trend in the world of the automotive industry.

Mate Rimac could well connect the dots. Its roots in Bosnia-Herzegovina and their professional development in Croatia. Elon Musk’s ideas in EE.UU. and his intelligence to move in the world of industry and technology.

Pure present. A Porsche, a Bugatti and a Rimac. The three brands united, promise the electric hypercar ever seen

From two months ago, Rimac Automobili and Porsche have taken control of the French brand Bugatti, that will be called from now on Bugatti-Rimac. The German house will have 45% of the shareholding and Rimac Automobili will have 55% remaining. Mate Rimac said it will combine forces with Bugatti to “Create a new technological and automotive power.”

Incredibly, another company that was born in a garage, breaks the standards of the world of industry and technology, and not only reached the level of flagship brands, but surpassed them, was ahead of all, and now offers their services to make their cars better every day.

The bicycle is the mobility of the future but it requires a change of mentality
The Speeder, the flying motorcycle is already a reality
Neither cars, nor motorcycles, nor tricycles: 10 vehicles that do not fit into any category