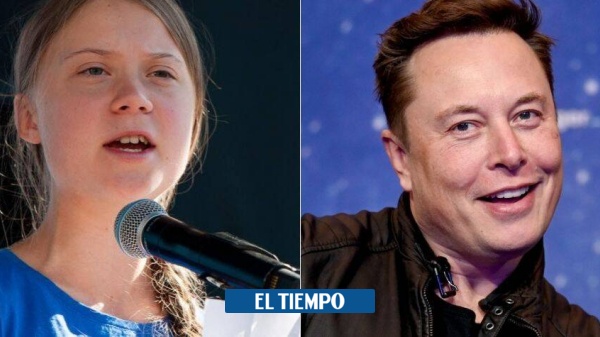 Greta Thunberg it has become in the last decade a symbol of the fight against climate change. At 18, this young Swedish woman is dedicated and focused on the risks posed by global warming. On her Instagram profile, she defines herself as “Climate- and environmental activist with Asperger’s”.

(You may be interested in: ‘They can put the climate crisis through the c …’: Greta Thunberg)

Elon MuskFor his part, he is a South African, entrepreneur and nationalized Canadian and American tycoon.

(Read also: Musk and Bezos: the technological race for the satellite internet)

He is also a co-founder of PayPal, SpaceX, Hyperloop, SolarCity, The Boring Company, Neuralink and OpenAI, and CEO of SpaceX, Tesla Motors, president of SolarCity and co-president of OpenAI. He is one of the richest people in the world, according to Forbes magazine.

At first glance, they have nothing in common. So why do these characters, like actors Anthony Hopkins and Keanu Reeves or billionaire Bill Gates have a certain relationship that has them linked?

Well, curiously, all of them have been diagnosed or have publicly recognized that they suffer Asperger syndrome.

Asperger syndrome is a disorder that is included within the autism spectrum and that especially affects social interactions, verbal and non-verbal communication, as well as the ability to understand nuances of language such as sarcasm.
They are generally characterized by being people who find it difficult to adapt to changes, radical in their thoughts and usually have very intense interests, that is, they are obsessed with a subject. But that virtue of concentration makes them able to be authentic originals in their fields of work.

It is also characterized by an abnormal functioning of the central nervous system and that manifests itself differently in each individual.

But they all have in common the difficulties for social interaction, especially with people of the same age, alterations in non-verbal communication patterns, restricted interests, cognitive and behavioral inflexibility, difficulties for the abstraction of concepts, literal interpretation of language or difficulties in executive and planning functions.

Greta ThunbergFor example, her activism and her 21-day journey across the Atlantic in 2019 to reach the Madrid Climate Summit made her known worldwide.

(We recommend that you also read: For SpaceX, Elon Musk Could Become The World’s First Billionaire)

The most prominent Asperger traits are (not in all individuals or to the same degree): lack of empathy, selective mutism, analytical and cold gaze, robotic intonation when speaking and absence of gestures of affection towards their parents, among other characteristics. They also have motor clumsiness, repetitive behaviors, and sometimes somewhat rude language.

Although they present similar characteristics, no patient with Asperger’s syndrome is the same as another, neither in its manifestations nor in its severity. The International Classification of Diseases, in its eleventh edition, in 1992, classifies it within the pervasive developmental disorders.

MuskOne of the richest men in the world, meanwhile, revealed in May this year that he has Asperger’s syndrome on the American prime-time program Saturday Night Live (SNL).

Musk, a rare type of guest host on SNL, said in his opening monologue that he was the show’s first host with this disorder characterized by difficulties in developing social skills, “or at least the first to admit it.”

Look, I know sometimes I say or post strange things, but it’s just how my brain works

(You may be interested in: SpaceX and Elon Musk accused of causing death of threatened birds)

“Look, I know I sometimes say or post strange things, but it’s just how my brain works. To anyone who has offended, I just want to say: I have reinvented electric cars and I am sending people to Mars in a rocket, did you think I was going to be a normal and relaxed guy? “He said at the time. “People with Asperger’s are born without a script, we just have our instincts and we don’t know what’s the right thing to do,” he said.

These are some symptoms of colon cancer

What Should You Eat If You Have High Cholesterol?

Do you suffer from gastritis? Avoid these foods that could make it worse