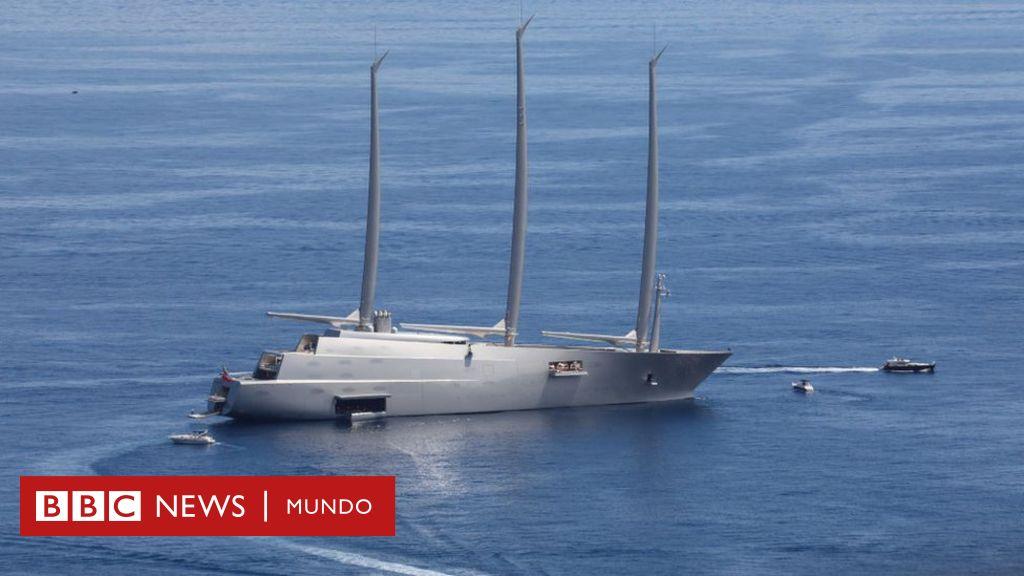 The news that Jeff Bezos bought a “superyacht” has rekindled interest in the hermetic world of wealthy globetrotters who enjoy this ultimate status symbol.

According to experts, the superyacht industry has been booming for years, even during the global economic slowdown caused by the pandemic.

Jeff Bezos, the founder of Amazon and the richest man in the world, has seen his personal wealth practically double since 2017, thanks to the enormous volume of income it made in 2020, when more people than ever turned to online shopping.

But Bezos is not the only one who has become even richer. Many of the wealthiest people in the world have seen their fortunes grow in recent years.

Y the shipyards have followed manufacturing mega yachts: getting bigger as they gain popularity.

According to experts and brokers, in 2020 more yachts were sold than ever, and in 2021 sales will again break records.

What do we know about Bezos’s yacht?

The 127-meter vessel is being manufactured in the Netherlands by Oceanco, according to the biography of Bezos published by the specialist medium. Bloomberg at the beginning of May.

It is estimated that it will cost around US$ 500 million, a drop in the bucket for the world’s richest man, whose wealth at one point grew by $ 13 billion in a single day in 2020.

His estimated net worth is now nearly $ 200 billion.

That price does not include the smaller motorized “support yacht” that Bezos also plans to buy.

The main yacht cannot include her own helipad due to the three navigation masts on her deck.

The smaller yacht is also expected to be able to carry other things, such as cars, luxury speedboats and probably even a submarine, according to an article by Forbes published this week.

The superyacht project, shrouded in secrecy and known as Y721, will be finalized sometime in June, according to Bloomberg.

Bezos likely placed the order several years ago as custom made boats like this can take around 5 years to build.

Oceanco, the Dutch yacht manufacturer, has not commented on the project.

They previously built the 106.7 meter Black Pearl, the second largest sailing yacht in the world.

What is a superyacht?

There is no official definition of a superyacht (compared to a normal yacht), but in the industry the term generally refers to a yacht over 22 meters long.

Some question that definition, saying that the term “superyacht” applies to boats over 60 meters long.

Others brokers they have even adopted the term “gigayatea“to refer to ships of more than 91 meters.

“It’s all a bit of marketing,” says Bill Springer, who writes about the yachting industry for the magazine. Forbes.

Bezos’s yacht, which measure more of 121 meters, it is almost as big as the great pyramid of Giza (if the boat was placed vertically). It is just under half the length of the Eiffel Tower.

Only a few giant superyachts like Bezos’s vessel are built each year, but high-profile projects are often carried out with such secrecy that builders must sign confidentiality agreements.

Therefore, it is unlikely that we will ever know if Bezos copied the decorative styles of the Russian oligarch Andrey Melnichenko, who decided to cover the wall of a cabin with stingray skins.

The industry has grown rapidly over the past 20 years.

According to the U.S. National Marine Manufacturers Association, in 2020 boat sales peaked in 13 years, reflecting how people have turned to water for perform safe activities and with social distance during confinements due to the pandemic.

“The market has been boiling,” says Sam Tucker, head of superyacht research at market intelligence firm VesselsValue. “There has been a record number of transactions made and that trend continues even until now.”

According to Tucker, there are 9,357 yachts over 19 meters long found currently at sea, that is to say, they have not sunk or are not staying on land.

About 85% of them are motorized and 15% are sailing yachts like the one Bezos has commissioned.

Fewer yachts were chartered in 2020, says Tucker, who attributes this to travel restrictions during the pandemic.

Sales fell for a few weeks when the U.S. was hit by lockdowns in 2020, but then fell fired immediately.

In June, “it was like someone flipped a switch.” Orders started pouring in quickly, says Bob Denison, who has been a yacht broker in Fort Lauderdale, Florida, since 2001.

“There has been nothing like it before,” he says. “The demand is two or three times greater than what I have seen.”

About 65 boats of those it sold in 2020 were superyachts. So far this year, about 40 superyachts have been sold, which means that your company has sold about 2.2 superyachts per week since January.

Demand has totally outstripped supply, says colleague Ben Farnborough, adding that it is now much more difficult to find second-hand boats to sell.

Farnborough hopes that the easing of travel restrictions due to the coronavirus will soon allow travel to Europe for more second-hand yachts to sell in the US.

Boats often are bought by corporations and are then chartered by the company owner, making it difficult to establish with certainty which yachts are owned by whom.

In famous shipbuilding ports, like the one in the Netherlands where Oceanco is located, hobbyists try to detect the license plates of private jets in an effort to determine which billionaires have come to visit their future yacht.

Privacy is the goal of owning a yacht, says Tucker, who considers the sector a “opaque industry”.

Tech industry billionaires Mark Zuckerberg and Bill Gates are rumored to own yachts.

“These are very secretive assets and one of the reasons they are bought is for privacy,” says Tucker.

And the ultra-rich may want to keep their new toys ultra-private today.

When Hollywood billionaire David Geffen posted on Instagram a photo of your yacht saying that he was “isolated” in a tropical paradise and that he hoped that everyone would be “safe” during the pandemic, the rest of mortals were quick to criticize him.

“Did David Geffen just insult everyone?” Commented one user in reaction to Geffen’s not-so-humble boast.

Why are they so expensive?

Yachts offer “true exclusivity,” says Springer, who compares owning one to owning a private island or build a custom city right from the start.

“In the Renaissance, wealthy patrons paid the equivalent of millions of dollars to build cathedrals,” he says.

“So superyachts are very similar in that regard,” he adds.

They are also getting more comfortable and reaching places beyond the “classic ports of glamor” like Monaco, says Springer.

People now take them to more exotic and remote places, like Antarctica and Papua New Guinea.as owners discover that they are more than just status symbols.

The best superyachts are tailor-made, with craftsmen designing every detail for the tastes of the world’s richest and most elite.

They can take years to build. A yacht as large as Bezos’s likely involved about 400 workers and designers, Farnborough estimates. When it’s finished, you’ll probably need about 60 people to man it.

Annual operating costs amount to about 10% of the purchase price, says Tucker of VesselsValue.

High oil prices and the possibility of more lockdowns could lead to more second-hand yachts hitting the market during 2022, he estimates.

What other things cost as much as a superyacht?

Bezos bought the newspaper The Washington Post in 2013 for just $ 250 million, about half the cost of his new superyacht.

A painting by artist Jean-Michel Basquiat was auctioned in New York for $ 93 million. There is also a Claude Monet painting at about $ 350 million.

Virgin Galactic has been selling tickets to space for between $ 200,000 and $ 250,000 in recent years as it prepares to its first commercial release.

But if you’re Jeff Bezos, you don’t need to book a ticket: he, behind the Blue Origin space company, could fly his own spaceship.

Remember that you can receive notifications from BBC News Mundo. Download our app and activate them so you don’t miss our best content.