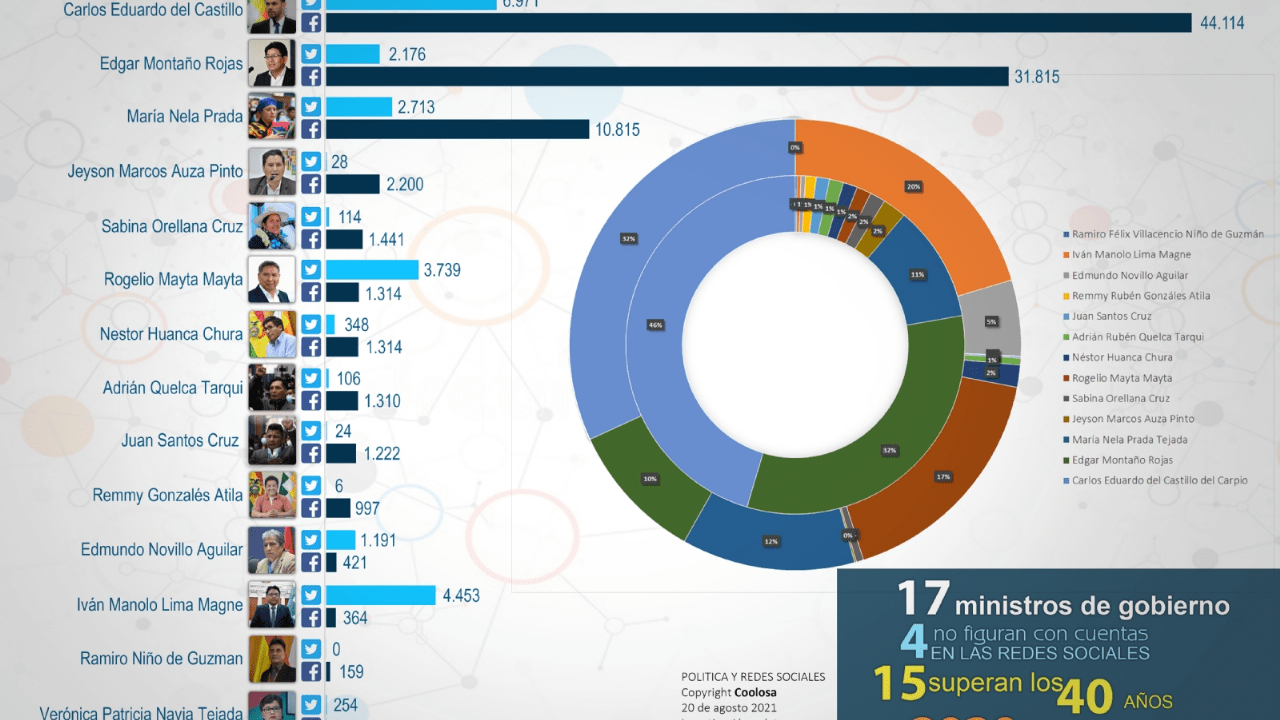 Of Luis Arce’s 17 ministers, four do not have social media accounts, 12 are on Twitter and 13 on Facebook. The one who does the best on the networks is the Minister of Government, Eduardo del Castillo, who has 44,114 followers on Facebook and 6,871 on Twitter, according to an investigation by Yessica Poma.

According to the study “Arce’s ministers on social networks”, which collects data for July and August, a large part of Arce’s cabinet members only used social networks in the electoral campaign and few remain active.

For this study, the pages (fanpage) were taken into account and not the profiles, the author clarifies.

“One of the most influential men in the RRSS is Carlos Eduardo del Castillo, head of the Government portfolio, considered millennial according to the age range of this generation. Del Castillo, like most of his colleagues, started on social networks in 2020 during the electoral stage, however, this character is more active on his platforms and who did the best in attracting followers, “he says.

Del Castillo has a verified Facebook account with 44,114 followers and 6,871 followers on Twitter. “He makes frequent use of both social networks where he publishes daily his activities and opinions on issues of the institution under his charge, making him one of the ministers with the most followers in this digital community.”

On the contrary, the ministers of Economy and Public Finance, Marcelo Montenegro; of Development Planning, Felima Gabriela Mendoza and of Hydrocarbons, Franklin Molina, and the minister of labor, Verónica Navia, do not have accounts on Facebook or Twitter.

Until July 20 – beginning of the analysis – the Twitter accounts of the ministers; Verónica Navia tejada (@VeroNaviaTejada) and Remmy Gonzáles Atila (@Remmy_Gonzales) existed. At the end of the study, in August, both disappeared or changed their names.

“The Minister of Education, Adrián Quelca, after having an anecdotal presence on his social networks between July and October 2020, and being appointed Minister of Education in November, deleted all the contents of his Twitter account as a result of strong criticism of its publications with respect to the previous government and its spelling ”, he adds.

In the network created by Mark Zuckerberg, the ministers with the most followers are Eduardo del Castillo (Government) with 44,114 followers; Edgar Montaño (Public Works) with 31,459 and Maria Nela Prada (Presidency) with 10,815.

Those with less than a thousand followers are: Remmy Gonzáles (Rural Development) with just 997; Edmundo Novillo (Defense) with 421, Iván Lima (Justice) with 364 and Ramiro Villavicencio (Mining) with 159.

On Twitter the relationship is reversed. Although Del Castillo follows first (with 6,971 followers) in second place is Lima (Justicia), with 4,453; and Mayta (Foreign Relations) with 3,739 followers,

Further down are Quelca (Education) with 106, Auza (Health) with 28, Santos (Environment), with 24 and Gonzáles (Rural Development) with six. Villavicencio, the head of Mining, is absent from this network.

The social media and digital marketing expert Erick Hurtado – quoted by the researcher – explained that the members of the Cabinet use social platforms as a conjunctural agenda and not as a profile of content creation or social dissemination.

“The acquisition of followers arises from the second one when you are the creator of your own content, but when you are an authority you are more visible to society and people follow you automatically.”

Tonny López, another of the experts on these social media platforms and their relationship with politics, stated that it is essential at this juncture to have accounts on the networks. “It is not necessary to take into account the numbers, but the interaction that is needed to be more in contact with your followers does.”

To improve their presence and, therefore, their influence, politicians must take into account that they are governing many generations who are at the forefront of technology, which is why they recommend that they seek advice from communication professionals who handle the RRSS and interpret their interest with people with pleasant messages.

An example of an avant-garde politician cited by López is the president of El Salvador, Najib Bukele.