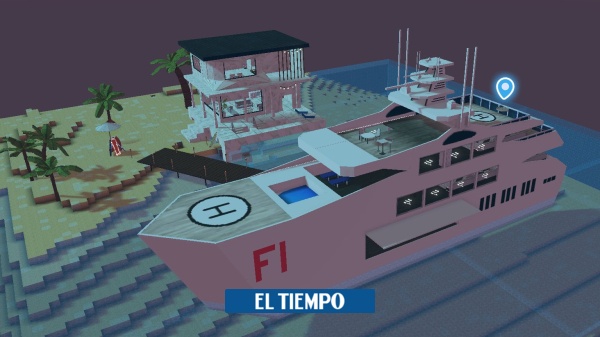 ‘The Metaflower’ is the name of the luxury yacht that was sold by the astronomical figure and that can only be ‘enjoyed’ in the virtual world.

Its owner will now have at his disposal four floors, a DJ booth, helicopter landing pad, Jacuzzi, luxury rooms and spaces for his recreation. All this in the metaverse.

The object was auctioned through the internet and, to the surprise of some, a person offered 149 WETH (a cryptocurrency), which is equivalent to $ 650,000 and 2,550 million Colombian pesos.

(You can read: This is ‘The Explorer’, the exclusive luxury plane-hotel for millionaires).

The yacht is a ‘Non-Fungible Token’ (NFT). This means, broadly speaking, that it is a digital asset that cannot be modified or exchanged.

How does it work?

“Escape to your own private island in the metaverse,” indicates Republic Realm, the company that created the yacht, which built the virtual stage ‘The Sandbox’ which its users can access through glasses and other technological devices.

Within that game is the ‘Fantasy Islands’ area, made up of 100 private islands.

The owners have a fully furnished villa. “They live in the paradise of their dreams. Today they are building a utopia in the metaverso on its islands, a utopia governed by the people ”, the company points out on its website.

(Read also: This is how the planetary protection system that NASA tests works).

The graphics of the ‘paradise world’ are assimilated to those of the game ‘Minecraft‘, according to the specialized portal’ Business Insider ‘, since everything is designed from blocks.

The yacht owner will be able to introduce him to his private island and travel through the virtual ocean with other of his friends who are also part of the platform.

The company has already sold all the access codes to the game for 60 WETH each (more than one billion Colombian pesos). Yes, 100 people obtained the ‘deeds’ of their virtual islands.

“Why would someone buy one of the islands?” Asks the same Republic Realm on its official page. According to them, a person would do it to entertain themselves, be part of a community and “participate in metaverse game experiences.”

(Do not stop reading: They present a flying motorcycle that can reach 100 kilometers per hour).

The yacht was just one of the first objects that the company was offering on the internet. Island owners will be able to purchase additional boats and jet skis to take their gaming experience to a higher level.

The price of the devices ranges from 7 million and 124 million COP, as can be seen on the ‘Open Sea’ sales platform.

The rise of the metaverse

According to specialized media reports, Republic Realm and its game have generated millions of transactions, since only in the last week of November they moved 86 million dollars.

(See also: In photos: the super plane that will travel anywhere in the world in 4 hours).

For experts, the craze for accessing virtual stages was further fueled by the Facebook announcement. The company of Mark Zuckerberg It wants to be a metaverse company and that is why, in the first place, it changed its name to Meta.

For several months, Meta engineers and developers have been working on accessories so that people can access digital worlds. For example, as this newspaper recorded, they are trying on a glove so that they can touch, manipulate and feel virtual objects as if they were real.

– See the cheapest car of the Tesla brand in Colombia.

– This way you can activate HBO Max if you are a Rappi user.

– Do you want to live like ‘My poor little angel’? Airbnb is renting the house.

– Video: the cartoon that shows Maduro as the ‘Superman’ of Venezuela.

– The cars that were sold the most in November in the country.