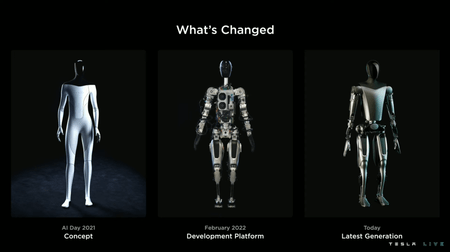 Finally after more than a year of have announced it and to know (in the form of a costume) to Optimus, Tesla’s humanoid robot, Elon Musk has finally shown the prototypeduring AI Day.

Design it is not similar to the one seen in all the images conceptualand Musk along with his team have commented that this is the first time that the robot is not using its security systems.

In addition, some additional videos have been shown about what the robot is already capable of, such as lifting things and moving between offices.

The team in charge of Optimus has pointed out that the robot It has a big difference from the original concept, since a realistic platform was needed on which it could be developed.

The concept of the robot (left), the current development (center), the model to be developed (right)

For this, the model that gives rise to this prototype was developed, a robot with much more realistic dimensions and size, with the intention of reaching a new generation, which would be the refinement of the current platform. Tesla has also detailed that this design change in the robot implies modifications both in its weight, power and level of movement.

For example, now you have a weight of 73 kilos, against the 56 of the original concept. In addition, it will have a total of more than 200 degrees of movement throughout the body and 27 of these will be located in the hands.


In the videos shown by Tesla, you can see how in controlled situations (with a harness for example), Optimus is able to load items and complete some basic taskssuch as watering plants and lifting vehicle components from the company factory.

It was also announced that this watch is powered by the same Autopilot system as found in Tesla vehicles to be able to move around their environment and recognize objects.

In the part of the hand, the robot has been designed with a similarity to that of humans, with the intention of being ergonomic, and being able to manipulate objects with relative easebeing able to load up to packages of nine kilos in each one.

This new version of Optimus has a 2.3 kWh battery, a Tesla chip, and integrates Wi-Fi connectivity, as well as LTE. The presentation also showed how, for example, the robot’s knee is directly inspired by a human kneethus carrying various actuators and joints.


The technical specifications of the development version of Optimus

For now, Elon Musk has commented that the robot is planned to be manufactured in large volume starting next yearand is expected to have a final cost of less than $20,000 for your purchase.

Musk on multiple occasions has commented that the purpose of Optimus will be to use them to household choresbut also for the care of older adults, as well as performing tasks repetitive, boring and dangerous for humans.

This is what the first version ‘Optimus’ looks like, the humanoid robot of Tesla and Elon Musk, which is capable of walking by itself and manipulating objects