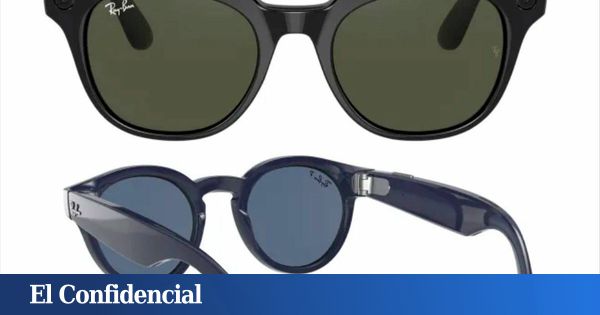 Facebook continues in its idea of ​​trying to open new markets and enhance its brand seeing that his social network is no longer the empire of yesteryear. Along that path, Mark Zuckerberg’s have been talking about the virtual world and the so-called metaverse for months and now they take out one more accessory to prop up their goals: a smart glasses. In collaboration with the firm Ray-Ban, Facebook is about to launch lenses that have two cameras on the front with the idea of ​​recording each step you take and offering different information to the user who uses them.

Although the official presentation of them will be given on the afternoon of this Thursday, the images have been leaked on social networks showing a design that reminds, and a lot, of the first Snapchat shows. The photos have been leaked by the technology expert Evan ‘Evleaks’ Blass through his Twitter account, and in them you can see glasses that follow the line of the classic models of the American firm such as Wayfarer, Round o Meteor. Under the name Ray-Ban Stories, the difference, of course, is the presence of two cameras next to the hinges on each side. There is also a button at the top of the right temple, which could be used to operate the cameras.

Apart from this, and its resemblance to the Snapchat product, at this time there is no more information about its operation. Zuckerberg has been talking about his ideas for relaunching the company as leader of the metaverse for quite some time, and these lenses could be aimed at taking a step further in this regard, but for now his leaders have not said anything about it. It is not even known if it will have augmented reality or virtual reality support.

The only thing that Zuckerberg said about the glasses is that they “have the iconic form factor [de Ray-Ban] and they allow you to do some pretty cool things. “However, we still don’t know what those things might be. Zuckerberg said the product is part of the”company journey to augmented reality glasses in the future ”and that more advanced AR glasses are also in the works.