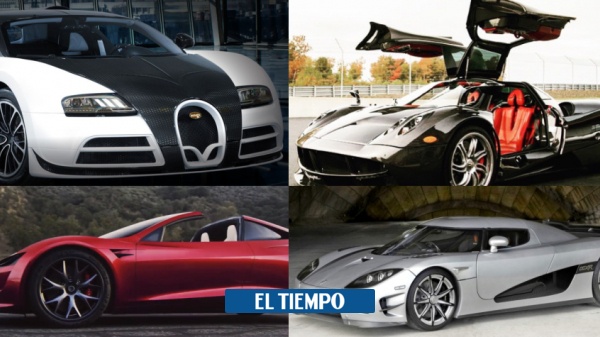 To the fanciful question of ‘What would you do if you won the lottery?’, Many tend to answer with confidence: ‘buy the car of my dreams’.

Although the most common desire is to have an extremely luxurious, the richest men on the planet are the only ones who can make it happen without a hitch.

How do men who practically ‘fly’ thanks to their wallets move on the ground?

(It may interest you: Tycoons who show that it is possible to be rich doing what we enjoy).

Blue Origin, a space tourism company, is the latest ‘toy’ with which Jeff Bezos plans to increase his fortune.

The man most powerful in the world, according to the latest ‘Forbes’ listing, he is widely recognized for having started his incredible fortune out of a passion for technology and new businesses.

As he has revealed in repeated interviews, Bezos consolidated the idea of ​​creating Amazon, one of the most successful electronic commerce companies, driving on the highway from New York to Seattle.

What some do not know is that the car in which it was transported in the early nineties, a modest Honda Accord modelo 96, continued to accompany him for almost 20 years.

This would be the model in which the ‘first spark’ of Amazon was born.

In the book ‘The Dream Store: Jeff Bezos and the Amazon Era’, it is stated that the tycoon drove the same car until 2013, when he contemplated other more modern options.

At present, from what some US media have been able to report, Bezos has two main ‘ships’: a Bugatti Veyron Mansory and a Koenigsegg CCXR Trevita.

(Read on: Yachts, tanks, and the luxuries and eccentricities of the Crown Prince of Dubai.)

The model of the Swedish brand Koenisegg that J. Bezos has is valued at at least 4 million euros (About 20 billion Colombian pesos).

In image, some of the companies where Gates has a stake. According to figures from Forbes Magazine, its capital reaches 124 million dollars.

The founder of technology Microsoft he’s one of the lucky few who can afford to own a car collection.

According to the latest ‘Forbes’ ranking, Gates, the fourth richest man in the world, managed to increase his loot with more than 25 billion dollars received in the last year.

At 65, the American tycoon keeps at least five luxury cars in his garage. However, in keeping with his environmental awareness, his latest acquisition was a Electric Porsche Taycan.

The Taycan’s system runs on 800 volts and its batteries have higher energy density and charge much faster.

The vehicle, launched less than a year and a half ago, has several versions and its base price is $ 165,000 (about 640 million pesos).

(We recommend: Bill Gates will make donations for environmental projects).

Zuckerberg has been on the lists of the wealthiest entrepreneurs on the planet for several years.

The man who took the first steps of Facebook in a college room he is recognized for turning his ‘hobbies’ into a business.

In these days when it is news for his desire to integrate the renowned social network into the logic of the ‘metaverse’, a blurred line between the real and the virtual, his name has been starring in several futuristic headlines.

Precisely that ‘advanced’ logic that Zuckerberg promotes with technology seems to be reflected in his interest in vehicles that ‘only need to fly’.

As several North American newspapers have announced, the ‘dad of social networks’ would be managing a Pagani Huayra.

‘Huayra’ is a Quechua word that, in Spanish, means “wind”.

With doors that open in the shape of gull wings, the copies of this automobile model stand out for their exclusive design. Its price is around 2.7 million euros (More than 10 billion of pesos).

Although the Pagani is his latest ‘toy’, Zuckerberg has always been noted for keeping a not at all ostentatious truck in his garage Honda Jazz. The value of the traditional vehicle does not even touch that of the wheels of its recent acquisition.

Zuckerberg would have driven this truck well into the 2010s.

Elon Musk started getting rich after the success of ‘Paypal’, an online payment platform.

Entrepreneurship and business books tell that the founder of a company transmits the mission of the company from his personal life.

Elon MuskA 49-year-old magnate born in South Africa and a nationalized American, he is one of the best demonstrations of the power of ‘selling’ by example.

The owner of Tesla, a firm dedicated to the automotive sector, could not have another vehicle that was not one of its ‘smart cars’.

The man, who last week announced his first humanoid robot prototype, has been driving a Tesla S Performance.

This would be the current model that the owner and founder of Tesla drives.

(A novelty: This is Elon Musk’s robot that will do the ‘dangerous and boring’ tasks).

Google was founded on September 4, 1998 in California, United States.

Although this pair of friends started their fortune from the same garage ago more than 20 yearsToday their roads are linked to such an extent that they have the same car.

Larry Page and Sergey Brin, the systems engineers who in 1998 created Google, have been seen on the streets of America with cars much more opulent than those they drove during their time at Stanford.

As reported by various local media, each of them has a Tesla Roadster, a model that was released in 2017 with a first version.

It is estimated that the price of this aerodynamic car is valued at just over $ 200,000, a value that is around the 780 million pesos.

The model of the founders of Google would be the version that was released in 2020.

Absurd: woman claims to be married to the ghost of Michael Jackson

The memes left by the OnlyFans ad about censoring sexual content