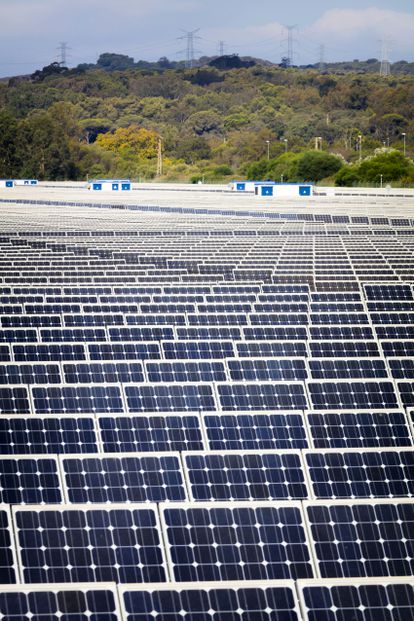 Spain should build a gigantic solar park, it could supply all of Europe,” Elon Musk wrote on Twitter in early April, when he debuted at the top of the list. Forbes of the richest in the world. Accustomed to the tweeting euphoria of the South African businessman, many laughed at his comments. But the President of the Government, Pedro Sánchez, picked up the glove and responded on the same social network that in Spain there was a “super ambitious” investment plan in renewables and that this was the moment to enter. “Come see it,” he wrote.

According to Natalia Fabra, who heads the EnergyEcolab research group at the Carlos III University of Madrid, Spain has more than three factors needed to become a net exporter of renewable energy: sun, wind and territory. Since the decree law for the energy transition of 2018 ended with distortions such as the so-called sun tax, the growth has been spectacular. Only the photovoltaic panels that were incorporated for self-consumption in 2021 (1.2 GW, according to the Spanish Photovoltaic Union) represent more than 1% of the current installed power in Spain (114 GW, with data from Red Eléctrica from the past 4 april). Last year, renewables broke records and reached 46.7% of all national electricity generation.

For the next few years, the goal is to far exceed the 39 GW that the National Integrated Energy and Climate Plan had set as an installed photovoltaic power target for 2030. As Mario Sánchez-Herrero, founding member of the solar energy cooperative, says ECOOO, “we are still in 2022 and Spain already has an additional 85 GW of projects authorized by Red Eléctrica only in photovoltaic plants, without counting self-consumption”.

Where the objectives are not being met is in the electrical interconnections necessary to sell to the rest of Europe the surpluses of a renewable generation that, for now, cannot be stored. Within the Iberian Peninsula there is a good integration between Spain, Andorra and Portugal, but the key interconnection to sell to the continent is the one that passes through France. The minimum set by the European Union was an interconnection that represented 10% of the installed power in 2020; and in 2030, 15%. Spain did not meet the first objective (the current interconnection allows the passage of 2,800 MW, well below the more than 10,000 MW target percentage) and it will not meet the second either: the planned expansions will barely bring the total to 5,000 MW by 2030, a year in which the installed power will be even higher due to the growing electrification of the energy system.

After five underground interconnections under the Pyrenees, the one that Red Eléctrica is now deploying is marine and reaches France through the Bay of Biscay. In exchange for avoiding the political resistance that a passage through the Pyrenees implies, costs are incurred that, according to Fabra, can multiply by two or even three times that of a terrestrial interconnection. Not to mention complexities such as the diversion caused by the Capbreton trench that they did not count on. From the initial plan, to have it in operation by 2025, it has been moved to 2027.

According to Red Eléctrica’s director of operations, Tomás Domínguez, the cost-benefit analysis of interconnections is always positive, despite all its complexities. “They allow further development of renewables to be placed in the rest of Europe,” he says. It is not only about the economic benefit that is produced with the export of the surplus megawatts, but about minimizing the intermittent effect of these energies. If all of Europe were 100% interconnected, surplus renewables in one country would automatically offset deficits in another.

Why then are not more works being done to expand it? One possible answer is a certain disinterest on the part of France. “Historically, the French transport network in the south has not been the most developed in its system,” explains Domínguez. “To make an interconnection it is necessary that two agree and provide the means and resources, and that also requires time”, he adds. According to Sánchez-Herrero, the explanation is as simple as that the French electricity company EDF has to amortize the gigantic construction costs of its nuclear plants before giving way to new and more competitive sources of energy from the south.

If true, this French resistance will now have to face Brussels, which in the face of the energy crisis caused by the invasion of Ukraine has less patience with the countries that put obstacles in the urgent development of renewable alternatives to Russian hydrocarbons. It is not the only factor that could drastically change the playing field in France. According to Le MondeEDF is studying some cracks that have appeared in the security systems of several of its nuclear reactors and only 30, out of a total of 56, are now working.

If the electrical interconnection is the ideal mechanism to export renewables when they are generated, green hydrogen production it is the best way to store your surpluses to sell them later. The problem, as Fabra says, is that the technology is still in its infancy and there are years to go before it reaches the level of maturity necessary to supply Spanish demand. Until now, the only green hydrogen plant in Spain is in Lloseta (Mallorca), where they use electricity generated with photovoltaic panels to separate hydrogen and oxygen atoms from water molecules (electrolysis process).

Once the technology matures, the key variable for hydrogen is once again transportation. According to sources in the sector, the most modern Enagás gas pipelines can also be used to send hydrogen; and in the old ones, the adaptation work is infinitely less expensive than building a hydroduct from scratch. In the REPowerEU plan with which the European Commission reacted to the Russian invasion, there is talk of accelerating the transition to green hydrogen, which is why the sector expects new and more ambitious international gas pipeline targets that are also valid for hydrogen. The total capacity of the two current gas pipelines between France and Spain is 7,000 million cubic meters per month, equivalent to about seven ships of liquefied natural gas.

The Spanish sun still does not warm Musk’s dream