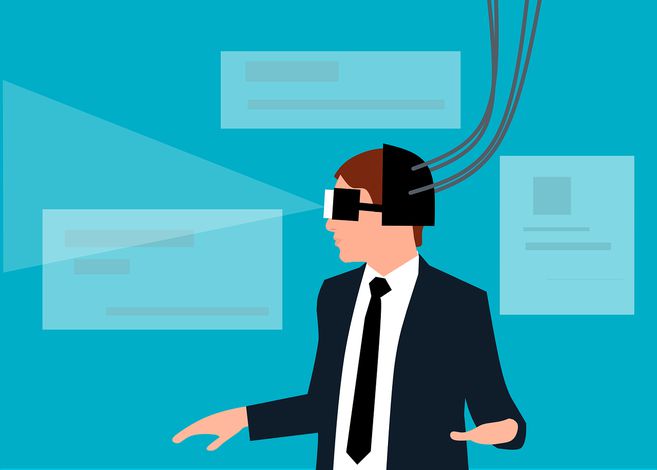 “The future that Mark Zuckerberg and his multinational mega-company offers us is that we live locked up and isolated all the time at home, immersed in a purely virtual or mixed world, with our eyes covered with bulky glasses and our bodies full of sensors.”

Finding myself these days here and there and everywhere with the word “metaverse”, I could not help but represent an imaginary scene in which two old absent-minded poets and completely oblivious to the new communication technologies hold the following dialogue:

“What do you think the metaverse is?”

– I suppose it is some metric innovation of a new poetic ism.

“Will the experiment be worth it?”

-I dont know. In any case, I will continue to write my poems in free verse.

But even for someone who is completely integrated into computing devices and the Internet, and who has even at the same time a slight tincture of humanistic culture, it is inevitable that the term “metaverse” will provoke a spontaneous evocation of his connection to poetry. Because in fact there is a metaverse in poetry and it is something very different from the one Mark Zuckerberg spoke about on October 28, when he announced the new Facebook projects and the new name of this brand.

Metaverse is the following verse from Verlaine’s famous “Poetic Art”:

May your verse be fleeting and smooth …

It is a metaverse because it is a verse whose subject is the verse itself considered from a general or conceptual perspective; a verse that advises how a verse should ideally be: “… fleeting and smooth…”.

Other acquaintance “Poetic Art”, that of the Chilean poet Vicente Huidobro, offers us two metaverses:

Let the verse be like a key that opens a thousand doors.

The explanation is the same: these are metaverses because their content deals with the property or capacity that a good verse should distinguish: that of opening a thousand doors (not real doors, of course, but metaphorical).

And so, I could continue here citing other metaverses, since there are many in the universal poetic tradition, especially in that genre of poems called “poetic arts.” Without going any further, the Colombian José Asunción Silva begins his poem “Ars” with a couple of metaverses:

The verse is a holy vessel; put in it only a pure thought …

Strictly speaking, it must be clarified that the cases I have just cited correspond to a practice that literary theory calls “metapoetry”, which in turn is a variant of another practice called “metaliterature”, which in turn is a variant of a larger phenomenon called “metalanguage.” But I allow myself to call “metapoetry” “metaverse” because, as we have seen, poets use the word “verse”, metonymically, in the general sense of “poem” or “poetry”.

The metaverse perhaps most cited when talking about the metaverse (read, I repeat, metapoetry) is the sonnet improvised by a comedy character The Silver Girl (1613), by Lope de Vega:

A sonnet tells me to do Violante, which in my life I have seen myself in so much trouble; fourteen verses say that it is a sonnet; mocking, mocking, the three go ahead.

I thought it couldn’t find a consonant, and I’m in the middle of another quartet; but if I see myself in the first triplet, there is nothing in the quartets that scares me.

For the first triplet I am entering, and it seems that I entered with the right foot, well I am giving the end to this verse.

I’m already in the second, and I still suspect that the thirteen verses are ending; count if there are fourteen, and it is done.

We invite you to read: Reflections in the midst of the pandemic: Covid, history and daily life

Now, why is it that these two words so different in their meaning – “metaverse” to refer to the future immersive virtual world of the internet, and “metaverse” as a literary term – are homonymous? Anyone can see that their homonymy lies in the fact that both are made up of two identical morphological elements: “meta” and “verse”. The “meta” element, in both words, is exactly the same; that is, it is the prefix of Greek origin that means ‘next to’, ‘after’, ‘beyond’, ‘between’ or ‘about’. For its part, the “verse” element, although it is also etymologically the same, reaches each word in different ways: to the literary “metaverse”, it comes directly from the Latin voice “versus”; On the other hand, the digital “metaverse” comes from the shortening of the “universe”, a procedure whose technical name is regressive derivation. In other words: due to linguistic economy, in the neologism “meta-universe” a regressive derivation of the lexical base “universe” was obtained, which turned it into “verse”, so that the extension of the neologism was reduced: from “meta-universe” “To” metaverse. ” (Words like “homophobia” and “television addiction” are also regressive derivations to express “phobia of homosexuals” and “television addiction”, respectively, since in the first “homosexual” is reduced to “homo”; and in the second , “Television” is reduced to “tele”).

But I said that the element “verse”, in the two words, is etymologically the same. The reason? Verse, in its literary sense, and verse as a compositional element of the word “universe” have a common origin: they come from “versus”.

“Versus”, as in Latin the past participle of the verb “vertere” (‘turn around’, ‘return’, ‘turn’, ‘convert’, ‘become’), comes to mean ‘turned towards’,’ turned ‘,’ converted ‘. In principle, it designated the back and forth movement of the plow on the ground, each furrow traced. Then, by metaphorical association, it became the name of each line of a poem, which also rotates from one line to another, ending at one and restarting at the next over and over again until the poetic text is completed.

That same “versus” was also combined in Latin with the word unus (‘one’) and formed “universus”, an adjective that means ‘turned into one’ or ‘turned towards unity’ in the sense of diversity considered as a unitary totality. , that is, in the sense of ‘whole, all, complete’. Then, at the time of Cicero, it was when it became the neuter noun “universum”, which gave rise to “universe” in Spanish and which already referred to the “set of all things”, the cosmos.

We invite you to read: Macondo and those persecuted by the Barranquilla Plan

The sadness of the metaverses

The two metaverses share another aspect more important than the etymological one: their sadness. In the field of poetry, the metaverse consists, as I have pointed out, in that the poem refers to itself, its theme is the poem itself: could there be something sadder? One hopes that the poem tells us about some experience in life, about some event – tiny or transcendental – in the world, and one hopes to know the vision and feel the emotion of the poet about it. But if instead of that, the poet turns to verse to perform a function that is typical of philosophers, aesthetes, literary theorists, that is, to reflect on what poetry is or should be, or to formulate its own conception of poetry, the reader’s frustration is enormous. Does the poet have nothing to say about what he sees and hears around him, about what happens to him and others, about the reality that he lives, suffers or moves him?

The other metaverse is no less depressing. The future that Mark Zuckerberg and his multinational mega-company offers us is that we live locked up and isolated all the time at home, immersed in a purely virtual or mixed world, with our eyes covered with bulky glasses and our bodies full of sensors. In this way, everything we will do will no longer be real, but will appear real: playing different sports, attending concerts or art exhibitions or the cinema, going shopping, meeting with family or friends (that is, with their avatars virtual 3D). Everything will be like always being in a video game. Dedicated, as an old advertisement said: Thank you Mark, I’d rather live.

What I am does not rhyme with either of the two metaverses.

The sadness of the metaverses