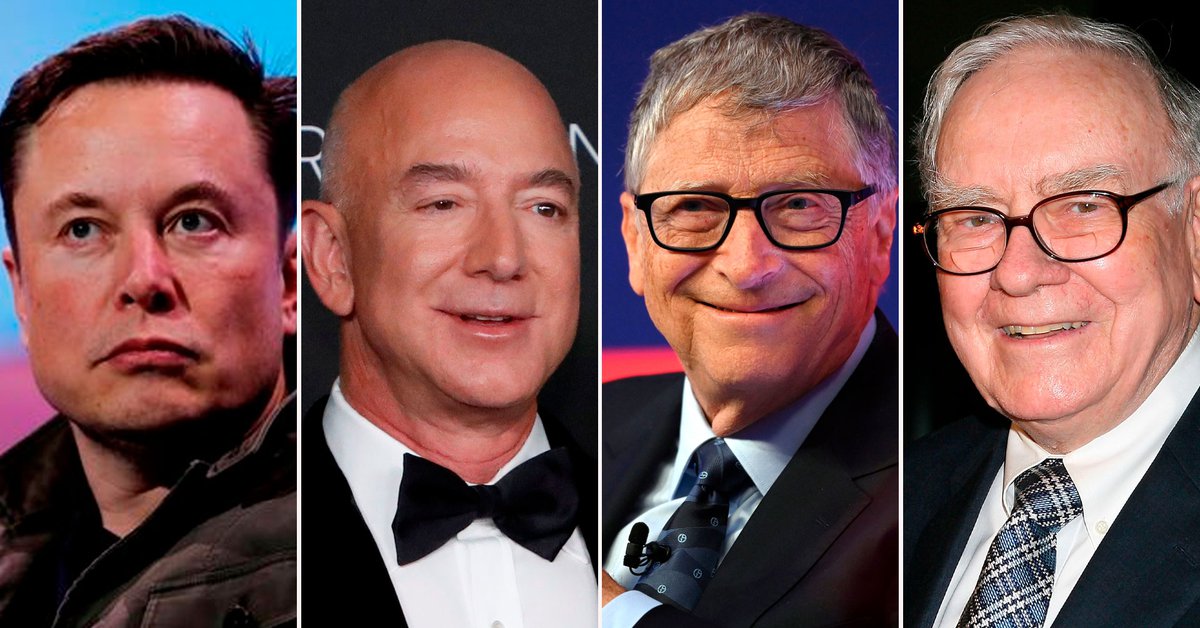 Elon Musk, the American businessman founder of Tesla and SpaceX, maintains his place as the richest person in the world and in the last year adds USD 165,000 million to his fortune, according to the records of the Billionaires Index of Bloomberg. Day by day that title is disputed with peers like Jeff Bezos, the founder of Amazon, and other big billionaire entrepreneurs like Bill Gates, creator of Microsoft, and entrepreneur and investor Warren Buffett, among others. In that framework, a circumstance that these four personalities have in common destroys the myth of the “self-made man”.

Much has been written about the secrets of the success of billionaires. They work hard, work long hours, take risks, get up before dawn. However good that advice is, there are a lot of people who work hard and for a long time but barely survive.”Stated the publication of INC before announcing the common point that was one of the keys to the success of these entrepreneurs.

The vanity of the self-made billionaire myth wouldn’t matter, except that it fosters the futile belief that anyone can get rich if they work hard enough. In fact, no one works harder than a poor person who has access to few resources.

All of these great fortune makers came from what anyone would identify as a very privileged background or a head start: their families already had money or political and business ties.

In that sense, Elon Musk’s father was the owner of a profitable emerald mine and a wealthy real estate developer in South Africa. Also, Jeff Bezos’ parents gave him $ 300,000 to start his business. Whereas Bill Gates’ parents were wealthy and had strong connections to IBM. For his part, Buffett’s father had been a highly successful investor and a four-time congressman.

Elon Musk, the American businessman behind Tesla remains the richest person on the planet and in the last year has added USD 165,000 million to his fortune

“These guys obviously played their cards well, but they were dealt a very strong hand at first and were lucky when they played new cards, probably because the deck they were playing with was already stacked in their favor.”, Remarked the publication of INC after the review.

In this way, this characteristic shared by Musk, Bezos, Gates and Buffet allows us to recognize that the “self-made” man is not really an accurate description in these cases.

INC claimed that Elon Musk’s father owned a profitable emerald mine and was a wealthy property developer in South Africa. He also explained that Jeff Bezos’ parents gave him $ 300,000 to start his business. While Bill Gates’ parents were wealthy and had strong connections to IBM and Buffett’s father had been a highly successful investor and a four-time congressman.

“The vanity of the self-made billionaire myth wouldn’t matter, except that it fosters the futile belief that anyone can get rich if he works hard enough. In fact, nobody works harder than a poor person who has access to few resources ”, questioned the publication.

In that sense he also draws a critique by arguing that the myths of “self-made” men also encourage people to think that billionaires “deserve” more money than they could possibly spend and enjoy tax laws that guarantee that their Wealth will continue to rise, when “14 million children in America are without food.”

Jeff Bezos, founder of Amazon, in second place in the ranking with a net worth of USD 193,000 million (EFE / Blue Origin)


“Look, entrepreneurship is great, but it is not a solution for poverty. Entrepreneurship is a way forward for those of us fortunate enough to have training that can provide the support to develop the skills and capital needed to start a business.”, He raised. And he questioned: “Are there some very poor people who have been successful and are even rich? Sure, but those examples are by definition exceptional ”.

In this context, he concludes with a reflection on the matter: “If you are a successful entrepreneur, be proud of your achievements, but do not turn your success into a club with which to hit the less fortunate. It is not a good look; It makes you look small and mean. And stop with the ‘do-it-yourself’ myth. It’s silly and you know it. “

Gates and Buffet, a few years ago (AP)

The list of the 10 richest men in the world

Beyond their history and antecedents, these entrepreneurs have managed to maintain and expand their fortunes while continuing to innovate. Elon Musk, the American businessman behind Tesla and SpaceX, is still the richest person on the planet, adding $ 165 billion to his fortune in the last year, according to the records of the Billionaires Index of Bloomberg.

The podium is completed by the American Jeff Bezos, founder of Amazon, in second place in the ranking with a net worth of USD 193,000 million and the French businessman Bernard Arnault, owner of the most famous luxury brands, hotel chains and even the mythical Orient Express train, in third place with USD 169,000 million in his pockets.

Meat prices freeze only for the weekend: the government’s request to supermarkets
They expect almost completely full in tourist sites for the long weekend: which are the most saturated destinations
Starbucks changed 40 years of stable strategy to exit the pandemic: what is the new approach and how it worked
American visa: when will the interviews resume to process the permit to travel from Argentina

The reason for success: what is the characteristic shared in their youth by billionaires Musk, Bezos, Gates and Buffett