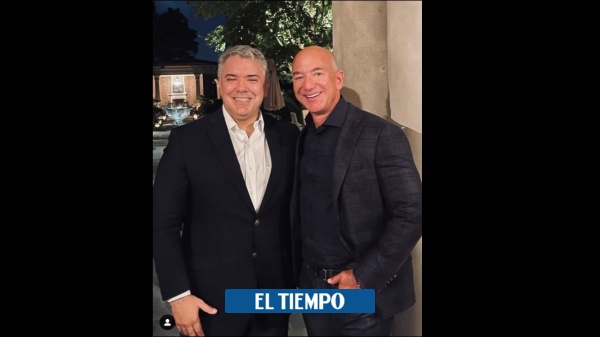 The President of Colombia, Ivan Duque, met last Sunday in Washington with the founder of Amazon, Jeff Bezos during the visit to the US capital that the president made before moving to New York to attend the United Nations General Assembly.

As explained from the Colombian embassy, ​​the meeting with the well-known billionaire took place on Sunday night and lasted for an hour, in which they talked about environmental policy. From the meeting there was a photograph that Duque recently shared through his Instagram account.

(You may be interested in: Why Duque spoke of the ‘fragile peace agreement’)

“During our #AgendaDeTrabajoEnEEUU we met with the founder of @amazon, @jeffbezos, with whom we shared the challenges we have in Colombia for the protection of the environment and the objectives that we have set ourselves to advance in the fight against climate change”, was the message with which the president shared the image.

(Too: Duque defends changes to the Guarantees Law)

According to the EFE agency, the meeting was attended, among others, by Cristián Samper, president of the Wildlife Conservation Society (WCS), Andrew Stier, director of
Bezos Earth Fund, and the ambassador of Bogotá to Washington, Juan Carlos Pinzón.

Duque arrived in the US capital on Saturday and on Monday he fulfilled a busy schedule before traveling to New York, in which, among other things, he decorated Felipe Gómez, head of the Bank’s Migration Unit, with the Order of Boyacá. Inter-American Development Bank (IDB), for his work in the humanitarian assistance of Venezuelan migrants and refugees.

Coalition of Hope proposes ministry of security and coexistence