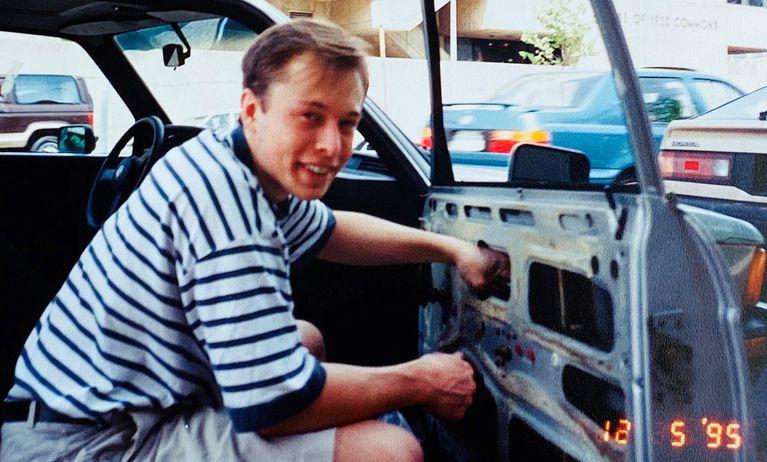 the south african Elon Musk he became, by dint of talent and inventiveness, one of the leading entrepreneurs of the new era. The tycoon who sparked a revolution in aerospace and built himself into a business genius has the ability to pay, due to his net worth, exorbitant amounts such as what the Argentine external debt could represent. However, the first projects of him commanding Tesla They did not turn out as he expected.

The businessman was born on June 28, 1971 and quickly discovered what his calling was. Some time before starting his studies at the University of Pretoria, where he spent a short time, he was able to program his own computer and even managed to design a game called Blastar; Interestingly, the space theme of his invention foreshadowed his future.

At the age of 17, Elon Musk decided to take a trip to Canada to train and studied physics and economics. However, he understood that his professional growth would become more robust in the cradle of technology companies: in 1992 emigrated to the United States to enter the University of Pennsylvania and began a doctorate at Stanford.

In any case, his qualities were already more than notorious long before he became a revolutionary; with his brother Kimbal founded the company Zip2 in 1995, which was one of the first draft maps online. That creation had the support of companies and media of great caliber, such as the Chicago Tribune and The New York Times. Later, he sold the firm to Compaq for $307 million. From there, his rise was to be meteoric..

In the months before the start of the 21st century, the established tycoon created the online bank X.com, which merged with another company with the aim of forming PayPal, which today stands as one of the most widely used online payment systems in the world. In 2002, the brand went public and the board of directors, of which Musk was a part, decided to accept an offer to buy from eBay. With that sale, the South African began his empire.

First of all, it arose SpaceXfirm with which the businessman achieved a series of milestones: it was the first private company to launch and recover a spacecraft (2010); the first to send a vehicle to the International Space Station (2012); and in doing the same with astronauts (2020). At the same time, the aerospace company signed several agreements with NASA and there are already plans to promote trips outside the atmosphere aboard “taxis”.

Then in 2003 came Teslawhich took its name in recognition of the Serbian inventor and engineer Nikola Tesla It designs and manufactures electric cars with sustainable components, as well as other kinds of artifacts that promote the consumption of renewable energies. Although the firm is already well positioned, the difficulties were marked at the beginning.

It happens that the hierarchs of the company undervalued the necessary capital to start it up and the first vehicle launched on the market, the Tesla Roadster, did not have the expected results. Between 2008 and mid-2012, only 2,100 models of the car had been sold in 31 countries. Due to financial complications that put the company at risk of bankruptcy, Musk defined a resounding change of leadership and model; thus, profits began to quintuple for the following year.

The Roadster was a two-seater convertible based on the Lotus Elise. As is the norm in Tesla models, it had an electric motor of 248 horsepower. Symbolically, in 2018 Elon Musk sent his own first unit of the Roadster into space: he did it with the Falcon Heavy ship, and the car carried the mannequin of an astronaut named Starman in the driver’s seat.

After the roaster Tesla was able to put together a range of successful electric cars. Among them is the Model 3, a midsize that in 2021 was the best-selling plug-in car in the world. It also has a saloon, the Model S, and SUVs derived from the two cars: the Model Y and the Model X. The company already has four plants: two in the United States (the original one in Freemont, in California, and a recently opened in Texas), one in Shanghai and the other in Berlin.

In addition, the tycoon sought to venture into the world of social networks and wanted to buy Twitter for 44,000 million dollarsthe equivalent to the debt that Argentina contracted with the International Monetary Fund in 2018, but the acquisition was paused since the businessman preferred to meditate on the determination before lowering the hammer. With an estimated net worth of $252 billion, he is the richest man in the world according to Forbes and Bloomberg magazines..

The meteoric rise of Elon Musk, the tycoon who started with a failure