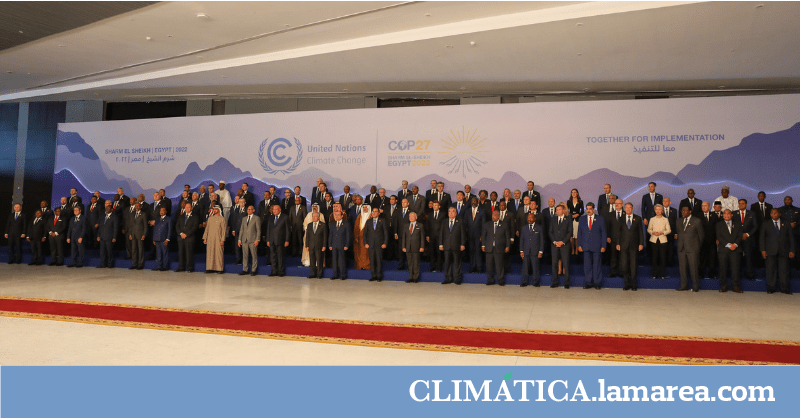 The big oil and gas companies spent close to 4 million dollars on disinformation, that is, on publish “misleading or misleading” messages about the climate crisistheir impacts and their solutions in social networks, within the framework of the UN climate summit (COP27) which was held in November in Sharm el Sheikh, Egypt. This is how he reveals it a report published by the Climate Action Network Against Disinformation (CAAD) coordinated by the Institute for Strategic Dialogue and in which different organizations such as Greenplace, Friends of the Earth or the University of Exeter have participated.

The CAAD has analyzed the campaigns supported in Facebook and Instagram -social networks that belong to the Meta company, directed by Mark Zuckerberg- that encouraged “false or tendentious” speeches about the climate crisis in the context of the international meeting. The authors also identified plastic manufacturers Y think tanks that promote the use of these polluting energies among the largest payers of climate misinformation ads. With “climate misinformation», refer to the dissemination of content that lessens the severity of climate change and its consequences, which deny climate change or that they present actions that contradict the scientific consensus as positive to stop global warming.

Between September 1 and November 23, 2022, the study found 3,781 ads, most of which were driven by the group. Energy Citizensassociated with the American Petroleum Institute with messages that «delay» climate action. In other words, they downplay the effects of climate change and, therefore, encourage the continued consumption of fossil fuels.

The report highlights among the coal trading companies Shell, Chevron Y ExxonMobilthat “they promoted their green credentials and contributions to achieving Net Zero (commitment to achieve zero emissions) during COP27, even though their investments remain overwhelmingly skewed towards fossil oil and gas.»

The top 10 pages by ad volume and spend were industry PR and energy lobby, among which are: Americans for Prosperity; Energy For Progress and Energy Citizens; Natural Allies for a Clean Energy Future; Affordable Energy for New Jersey; American Encore; Canadian Association of Petroleum Producers (CAPP); Enbridge; and The Empowerment Alliance.

Nearly 200 states committed during COP27 to create a loss and damage fund, whereby rich countries, the biggest historical polluters, will help developing economies foot the bill for their extreme weather disasters. The research indicates that paid content on networks favored a “misleading approach”» to present the background as “weather repairs”».

“This research shows that climate misinformation is not going away and is, in fact, getting worse. During the COP, the search engine of Twitter put #ClimateScam [estafa climática] among the first results without any justification from the supporting data“he says in the statement. Erika SeiberFriends of the Earth USA climate misinformation spokesperson

It is urgent to stop climate misinformation

“Until governments hold social media and ad companies accountable, and until companies hold professional misinformers accountable, crucial conversations about the climate crisis will be in jeopardy. For starters, Twitter should offer an explanation of how this inexcusable trend of climate denialism came to be.Seiber added.

The UN Secretary General, Antonio Guterres, who has criticized climate misinformation on multiple occasions, took advantage of his speech this week at the Davos Economic Forum to affirm that the big oil companies have sold “the great lie» and will be held accountable for it. This speech referred to the information that has revealed that exxon oil company Already knew the scope of climate change in the 1970s and did not act on it.

The IPCC, the UN climate change expert group, also warned in its latest report that the “the spread of scientifically misleading information by organized counter-movements has fueled polarization, with negative implications for climate policy».

The fossil lobby spent 4 million on misinformation during COP27