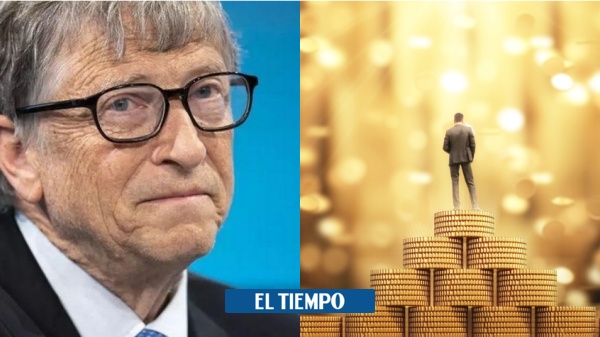 Bill Gates is a philanthropist and businessman who has accumulated a fortuna considerable and has maintained its economic position for more than twenty years. Although he has had ‘ups and downs’, he is one of the most recognized moguls in the world.

It never leaves the ‘top’ 10 of various economic, technological and social listings.

According to the report of the magazine ‘Forbes’, the tycoon appears in the list of the 400 richest people in America, accumulating a fortune of 134 billion dollars.

And although currently the businessman is dedicated to philanthropy and has stopped working directly at Microsoft, continues to accumulate millionaire sums.

How did you come to achieve such a fortune?

Throughout his career, the man has left one or the other tip to be as successful as him.

(You may be interested in: Bill Gates talks about an upcoming threat that would put the world ‘in check’).

It is essential to invest in a known item what you save.

In various interviews and talks, the visionary has made it clear that part of his heritage has invested in the stock market and in a few companies.

When you want to ‘get into business’ you analyze the risks and benefits. You also listen to experts who can help you make the right decisions.

According to the ‘Yahoo Finance’ portal, Gates invests in sectors and companies with stable growth such as FedEX, Walmart, Agriculture and the National Railroad Company of Canada.

(Keep reading: How is Bill Gates currently investing his fortune?).

The tycoon left his law studies to create Microsoft.

For example, the aforementioned media reported that Gates owns about 7.6 million shares in Walmart and in the National Railroad Company of Canada he has revenues of 2.9 billion dollars.

According to the newspaper ‘ABC’, Gates invests 60% of his heritageFurthermore, “the businessman lives in a house valued at almost 130 million euros that keeps works of art, incunabula books and luxury cars, but does not invest in any of these sectors. Buy to enjoy, but think before investing ”.

Although he has accumulated a lot of money with his ‘head’ company, he currently lives off the investment returns.

The mogul has repeatedly taken for granted that one of the best ways to achieve success is to surround yourself with people who provide knowledge or encourage you to be better.

According to the portal ‘Uppers’, “Gates always insists on the opportunity to surround himself with ‘valuable’ people from whom he can learn and who inspire him.”

“When you have smart people working with you, you want to keep them stimulated,” he once said when asked precisely about the prosperous environment under which he amassed his wealth.

Sports are a good hobby option.

The hobbies or hobbies are those things classified in the field of enjoyment or entertainment.

Gates has pointed out that carrying out activities outside of work, and that also grant pleasure, disconnect the subject from worries and provide an enlightening ‘new panorama’ against any defining decision of the future.

According to the portal ‘Uppers’, “it is one of the best therapies to disconnect, ‘reset’ the brain and return to the office renewed and with more strength and energy”.

Gates: between philanthropy and pandemic

Gates was always a man visionary and risky.

The current billionaire has made decisions that for many can be hasty, but as far as he is concerned, they have worked wonders for him.

In 1973, Gates entered Harvard to study law. However, two years later he left his career and joined Paul Allen to found Microsoft.

In 2002 he created a scholarship program at the University of Cambridge, which helps 80 people around the world, except students from the UK.

In 2008, businessman Bill Gates resigned from the management of the computer company and turned to philanthropy.

Man fights against serious diseases, seeks solutions for climate change and realizes initiatives and projects to help others.

In addition, he has spoken repeatedly to speak about the management that governments give to the pandemic.

In an interview with the newspaper ‘Time’ he assured: “We lost billions of dollars because we were not prepared [para esta pandemia]. For tens of billions of dollars you can invest [en cosas como vigilancia, vacunas y terapias] and make the chance of this happening again extremely low. “

On the other hand, he mentioned that money can be invested to eliminate different diseases and inequality: “It is an incredible bargain that will protect rich people from pandemics, but it will also allow us in global health, where inequalities are so dramatic, even to this day, despite the progress we’ve made, we have tools for things like eradicating malaria, tuberculosis, HIV. “

5 conversation habits you can use to better connect with others

Seven keys to making a fortune from scratch

Six golden rules to be rich, according to a millionaire

The formula to be a millionaire and achieve success, according to Bill Gates