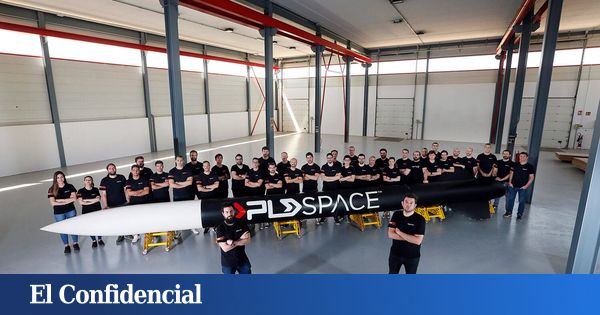 Is named Miura 1, but it only attacks the clouds. Manufactured in Elche, assembled and tested in Teruel, the first spanish rocket designed for aerospace transport is presented this Friday next to the Paseo de la Castellana in Madrid, where it will spend a few days exposed before traveling to the facilities of the El Arenosillo Aerospace Experimentation Center, in Huelva. From there it will launch into space in the second half of 2022 with the hope of placing Spain among the small number of countries with the capacity to put small satellites in orbit.

When Raúl Torres, CEO of PLD Space, and Raúl Verdú, director of operations, founded the company that will ‘put Spain into orbit’ in 2011, they were just 22 years old and few people took them seriously. In the first meetings to get funding, they were told that their project seemed like something out of Mortadelo and Filemón. Today it is already a reality that has the endorsement of numerous national and international institutions of the aerospace sector, as well as the support of different public administrations, and that has achieved 36 million investment for the development of its later stages. “We are told many times that we are too young a company for this challenge. NASA was 33 years old on average when man reached the moon. Ours is 32”, assesses Ezequiel Sánchez, CEO of the company.

In October 2016, the European Space Agency (ESA) selected PLD Space as the prime contractor for the project Liquid Propulsion Stage Recovery (LPSR), within the Future Pitchers Preparatory Program (FLPP). The objective of this initiative, endowed with 749,849 euros in its initial stage, was to study the possibility of manufacturing a reusable liquid fuel orbital launcher. As a continuation of this contract, the ESA granted on May 27 an additional million euros to the company from Elche – as part of the program Liquid Propulsion Stage Recovery 2 (LPSR 2)– to demonstrate the technology in a real setting, from the European Space-port, located in French Guiana.

The horizon is 2024, when the first commercial mission of the Miura 5, an orbital launcher that, if all goes well, will allow the transport of small satellites, from Cubsats (nanosatellites with a mass less than 1.33 kilograms) to class 1 payloads (a maximum of 300 kilograms), at the request of customers public and private. If the planned date and objective is met, PLD will become a pioneer startup in Spain and Europe, as it would be the first in the old continent to bring this type of device into the atmosphere, essential for strategic sectors such as telecommunications, defense and scientific research.

Incidentally, it would add to the European aerospace catalog a reusable launch system, something that at the moment only companies have SpaceX, captained by tech guru Elon Musk; and Blue Origin, owned by billionaire Jeff Bezos. The difference with a disposable launch system, where each vehicle is used once and then discarded, is that reusable launch vehicles can be launched into space more than once. Until now, a fully reusable orbital vehicle has never been used in real conditions. The closest thing is the space shuttle, although only the orbiter – which includes the main engines and the two booster rockets – can be reused, while the external tank is lost in space.

The first rocket ‘made in Spain’

The Miura 1 is a prototype of the Miura 5. In other words, the step prior to the development of the model that will carry satellites. Have 12.2 meters high and it can carry a payload of up to 100 kilos, distributed in four individual compartments, with power supply, storage and data transmission. It is capable of reaching about 150 kilometers altitude, thus surpassing the Kárman line (100 kilometers), which marks the border between the atmosphere and outer space. However, it is designed for suborbital flights (those that do not bypass the Earth in its entirety), in such a way that its use will be limited to promoting scientific research and technology development in microgravity conditions.

During one of the first flight qualification tests, carried out at Teruel airport In May 2019, the ‘New Space’ project suffered a severe setback after an unexpected explosion that caused significant material damage, including the loss of the first TEPREL-B engine model. As a consequence of the incident, the company decided to stop the process and analyze the causes that caused this problem to solve it. Eight months later, PLD Space successfully carried out a new test that, this time, allowed to confirm the correct operation of the engine for two minutes, a time equivalent to the entire propelled phase of the MIURA 1 flight and which would allow the rocket to reach the space.

Within the framework of the Madrid Science Week, the Miura 1 will be exhibited during the days November 12, 13 and 14 on the esplanade of the National Museum of Natural Sciences, located at number 2 José Gutiérrez Abascal street. Public access will be free and, as the icing on the cake, PLD Space will organize two workshops for children taught by the disseminator Astronauta Lili: one on Saturday, from 10:30 to 11:30; and another on the same day, from 12:00 to 13:00. Both will be free, upon registration.