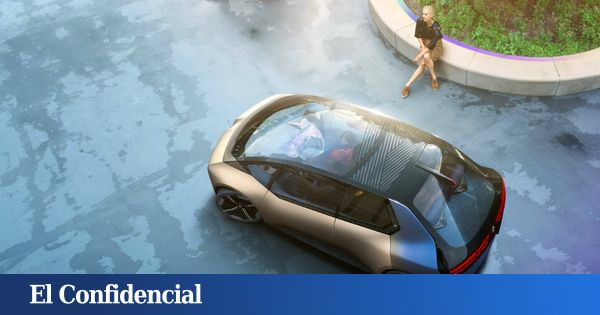 The cars of the future will not fly and they do not need to. Of the seven we have selected for this article, some are just around the corner – like the new one Microline – and others announce technologies that won’t see the light of day for a couple of decades. But they all carry us flying and not flying to cities where there is no endure the backfire or the fumes of internal combustion engines.

Volkswagen and Tesla are locked in a race to see who is the handsome man who first brings out a compact electric car at the 20,000 euro mark. Or that’s what the electrified blog says Electrek. The VW people believe that they will take the jack to the water first with a car made 100% with recycled materials and a design that is technically known as viejuno-modernuqui.

In this future of autonomous cars, those of VW unravel and install a full-fledged screen that can cover everything the windshield Forward. Because they are worth it. It is only supposed to be to watch movies or play video games while you have the car out of the way or you have left the children locked up so they don’t give you the grill while you shop at Carrefour. If this car ever materializes in full autonomous mode, I can imagine every top scorer playing Gran Turismo 9 while the car runs on its own. A fractal of the absurd of the 21st century.

The BMW iVision Circular is BMW’s proposal for 2040. An urban minivan that, according to the German company, will be an example for the circular economy (hence the original name). That means everything in this machine will have been recycled and everything can be recycled once it has reached the end of its useful life.

It is a compact car designed to go around town. And what I like the most is that it has doors that open oppositely to leave the interior completely exposed and easily accessible. In fact, this is one of the common themes in almost all vehicles of the future, such as the previous VW car and others that you will see later. Welcome to it. What I like least: that it still has a steering wheel. If by 2040 we haven’t been able to master the autonomous car 100%, let’s all switch to scooters.

Del Microlino already said that it is one of those cars that is called to invade the cities along with other two-seat compacts in the same style. This is version 2.0 that, after many modifications, has appeared at the Munich show and which seems to be the definitive version that will be released “shortly”.

They are perfect cars for fleets of shared vehicles, with the same old-modern-uqui style as the VW but even more obvious and compact. The only thing they want with the Microlino is to be comfortable, tiny and move as efficiently as possible. Well, because every time I see an SUV in the city – and they are the majority – I want to take out a baseball bat and make some quick fixes for sheet metal and paint for tacky and inefficient.

Speaking of SUVs, if you live in the country, Mercedes-Benz also goes up the hills of the retrofuturismo with this fully electric Mercedes-Benz Concept EQG. Apart from the resounding personality of the Mercedes classic, this bicharraco has an electric motor mounted on each wheel so that control is supposedly perfect on any terrain.

If you really need a car of this size you will not have to wait long because Mercedes says it is a “concept close to the definitive model”. So be it.

On an aesthetic level, the Hyundai Vision FK is not the neutron bomb. An ordinary sports car that could pass for BMW, Audi or Tesla, like all cars in this class today. The difference here is that Hyundai has decided to stop batteries and go completely to the hydrogen offensive. The only batteries that you will find in this sports beast are those that serve as storage for the energy generated by its hydrogen cell.

Koreans are serious. They know that right now there is no infrastructure necessary to support a fleet of hydrogen cars whose only waste product is pure water steam, but they assure that by 2040 they will invade Earth with cars like this. Let’s hope that’s true and that by then we already have fusion reactors to produce 100% green hydrogen and not depend on the oil lobby.

Of the Mercedes Benz Vision AVTR we have already talked. It’s like an alien on wheels. Introduced two years ago at CES, Mercedes has updated it with a system that “reads the mind” (it does not read it, but interprets your activity in the cortex). Not like it’s Firefox’s fighter Clint Eastwood, of course, but for now we will have to accept octopus as a pet until really Elon Musk is able to put a chip on us Neuralink as if we were lap dogs.

Obviously we won’t see this machine for a long time, if we do. And it will not be in its current form, but Mercedes will be incorporating elements to the following models, he says. But it does not matter: for now it is the most futuristic car we have seen in a long time, although it also still has a steering wheel.

The idea of ​​a Smart SUV is the perfect definition of oxymoronBut the truth is that the company that popularized the ultra-compact car has created a four-door that could be perfect for families to move around town or between nearby cities in comfort.

Again, it is a car with four doors that open in the opposite direction, leaving access to the cabin completely free of obstacles. Perfect for putting the baby seat in without having to contort like a yogi with low back pain. Also like other cars on this list, the roof is fully open to the sky thanks to a gigantic moon. Smart suggests that the car will be something very close to what we will see shortly as a commercial model. They will be manufactured in China, of course.

Little can be said about this Porsche Mission R Concept, a GT specially designed for competition and that It is not an adaptation of a commercial car rather, it is designed and built from scratch to compete with an electric motor. The only thing that I dislike are those new lights that they put on their electric cars that have nothing to do with the iconic headlights of the German brand.

According to Porche, the body of this machine is made of natural fiber reinforced plastic (NFRP) instead of using carbon fiber. That, they claim, makes body production create 85% less CO2. It’s another common theme on this list: the use of recycled and sustainable materials.

Now, let’s see how long it takes to get to concessionaire of the industrial estate.