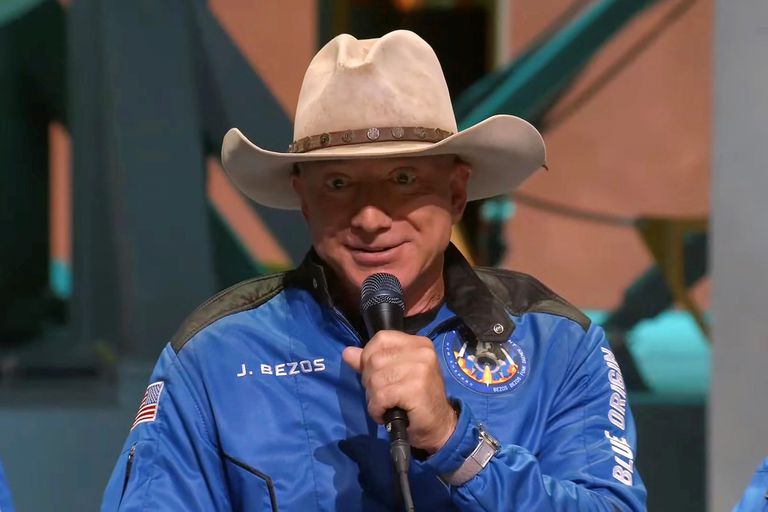 The American businessman Jeff Bezos generated a wave of memes thanks to the curious and controversial look that he chose to celebrate the night of New Year with his girlfriend, the journalist Lauren Sanchez, and his family.

The founder of Amazon published on his Instagram account a series of photos where you can see the eccentric outfit which prompted all kinds of comments: $ 1000 colorful shirt, tight-fitting white pants, and heart-shaped glasses. To complete the picture, a pool and a bright poster in the background announcing the arrival of 2022.

“We had a great time last night celebrating with a crazy party at the disco with the familyBut the New Year is also a great time to take stock and focus on personal growth, renewal, rebirth, and paying close attention to every moment of your life. The good and bad. Everything. Celebrate and grow ”, mused the 57-year-old mogul.

As if that were not enough, he attached more postcards of the celebration with other special guests of the night. In one of the images You can see the millionaire businessman with his girlfriend’s ex, the American football player Tony González, and the son they both had, Nikko. Everything seems to indicate that the Latin look was the leitmotiv of the evening.

However, the most fun came through social networks, when users showed their usual ingenuity and reacted with a lot of humor a photos of the former CEO of Amazon.

“Jeff Bezos turned Pitbull so fast you didn’t notice”Wrote a tweeter who compared the eccentric New Years look of the businessman who traveled to space with the usual look of the Cuban-American reggaeton singer.

“Is it Bezos or the singer from La Mosca?“Asked a user referring to Guillermo Novellis, leader of the Argentine ska group, known for wearing sunglasses that cover most of his face.

The characteristic acid humor of Twitter continued with the comment of another user who noted: “If you did not know Jeff Bezos, I would say that he is the typical old man who goes to the clubs to feel younger”.

“We confirm that Jeff Bezos orders his clothes on Amazon”Wrote another tweeter who questioned the quality of the controversial outfit of the tycoon who, for several consecutive years, he was the richest man in the world.

“How strange are Ronnie Arias and Silvina Escudero (?)”, A Twitter user ironic pointing to the supposed resemblance between Bezos and his girlfriend with those Argentine celebrities. Will you dare to try your luck in Guido Kaczka’s show?

Another tweeter found he went even further: He found an old 1977 photo and compared it to Bezos’s New Years postcard.. And to tell the truth, they are quite similar.

“I think we no longer have to wonder what Jeff Bezos would look like if he was born in Medellín”Wrote another tweeter referring to Colombian touch in the look of the businessman.

The curious look of Jeff Bezos on New Years that caused unusual comparisons on Twitter: from Pitbull to Ronnie Arias