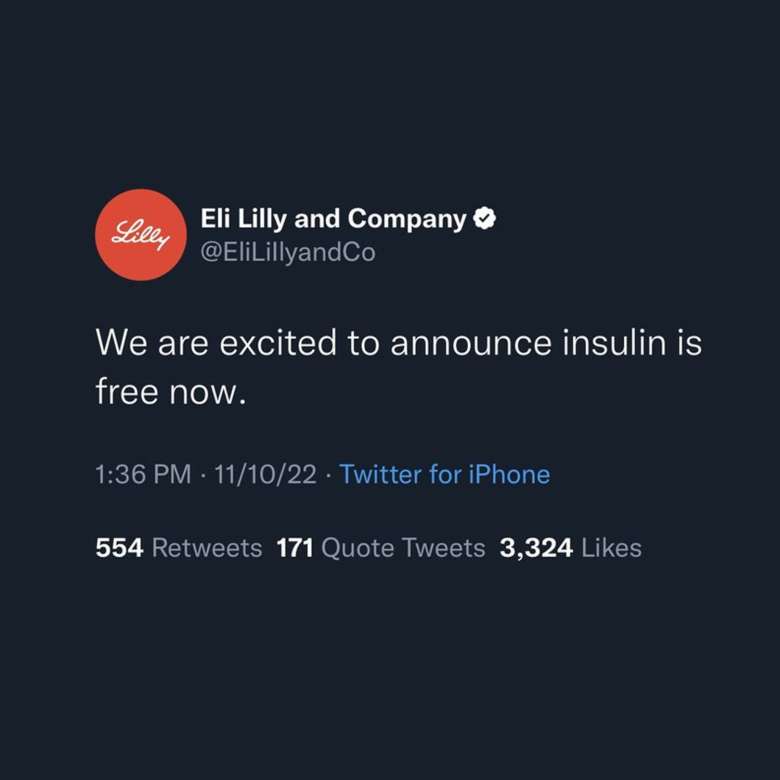 The verification crisis during the new term of Elon Musk on Twitter he claimed his first victim. Eli Lillyone of the largest pharmaceutical companies in the world, lost millions of dollars because of a fake tweet. A user took advantage of the $8 verification to post from an account posing as the company.

“We are pleased to announce that insulin is now free,” read a tweet posted from the @EliLillyandCo account on Thursday afternoon. By having the verified symbol, some assumed that the pharmacist would give away insulin. However, it was a false profile, like those that circulated during the last week after Elon Musk opened the verification to everyone.

The curious thing is that, despite the change in policy that threatened to suspend all accounts that supplant the identity of another person or institution, the fake tweet went on for hours generating retweets and likes from hundreds of users. In the end, Twitter did not suspend the account for violating its rules, although it did withdraw verification and it now appears as private.

Later, the pharmaceutical company issued a tweet from its official account apologizing for the confusion, although the damage was done. The False post caused an 11% drop in Eli Lilly shares on Friday morning. The collapse also affected its main rivals, Novo Nordisk and Sanofi, who together with Lilly control the distribution of insulin in the United States.

The apocryphal tweet too generated thousands of criticisms of the company. Users accuse Lilly and other pharmaceutical companies of raising the costs of insulin, a drug that no generic option in the US.

There would be no need to mislead people if they actually lowered the cost of a drug that costs next to nothing to make but is needed by thousands to live.

In accordance with Investors Business Daily, Eli Lilly earned $878 million from insulin sales last quarter. Lilly, Novo Nordisk and Sanofi not only have 100% of the drug’s share in the United States, but also produce 90% of the world’s insulin.

The circus of verified accounts did not only take the opportunity to hit pharmaceutical companies or make fun of Elon Musk. Some athletes suffered the onslaught of false accounts with shocking ads. An apocryphal account posing as LeBron James published that the Lakers basketball player asked the team to make him transferable.

I am officially requesting an exchange. Thank you #LakersNation for all the support over the years. To bigger and better things!

Connor McDavid, star of the Edmonton Oilers in the NHL, announced that he had been transferred to the New York Islanders. At the same time, Yankees reliever Aroldis Chapman revealed that he had renewed his contract for another three years. The wave of fake tweets from verified accounts highlighted the problem Twitter faces with misinformation.

The present day Twitter Twitter Blue canceled and unchecked the option to subscribe to the payment service. Several users confirmed that the section disappeared in the iOS app and in other cases, a button warns that will be available in the future. The information was confirmed by Jane Manchun Wong, a renowned analyst who explored the API and stated that it is no longer in production.

The decision is important, since Twitter Blue is one of Elon Musk’s most important bets. Judging by the changes the new owner has made in the last few days, we’re not sure it’s a definitive step. Let’s remember that Elon changes his mind every time a cloud covers the sun, so we could expect a new announcement in the next few hours.