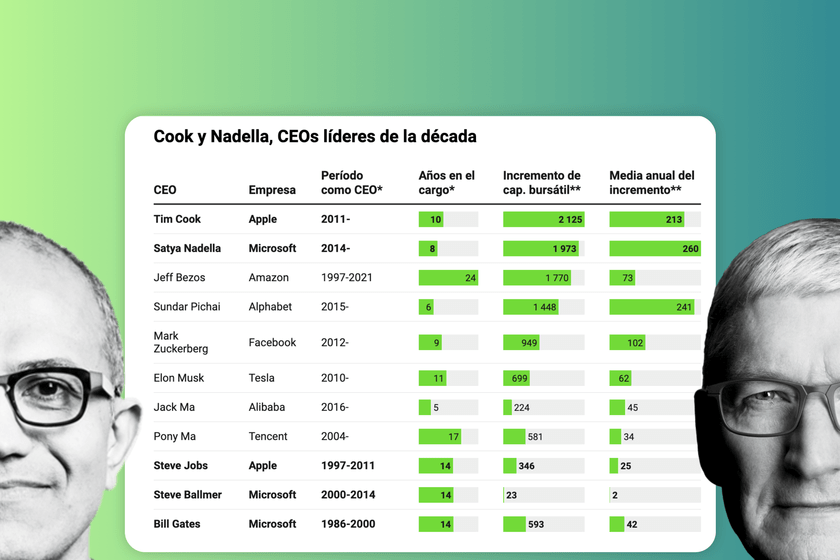 Ten years (and a few days) since Steve Jobs resigned as CEO of Apple for his poor health and gave the throne to Tim Cook, until then director of operations. Jobs died less than two months later, something that ended up catapulting a funereal setting that transcended human demise: the idea that Apple had lost its magic forever it enveloped the environment of the company like a nebula.

Headlines like ‘Why Apple is Doomed‘(“Why Apple is doomed”) they replicated for months. A decade later, Apple has a market value of more than $ 2.5 trillion and is the most valuable company in the world. Cook has not done so badly.

Something after Cook was Steve Ballmer who stepped down as CEO of Microsoft, thus completing the generational handover of the two historic technologies. With a yellow polo shirt, tears in his eyes and his usual extreme enthusiasm (those mythical kangaroo jumps) took a mass bath to say goodbye to the company to the beat of your favorite song: The Time of my Life. He left behind almost three decades as CEO in which the company grew below inflation, losing the train of the smartphone and undertaking a ruinous operation as it was buying Nokia a year before.

To the now owner of the Clippers Satya Nadella replaced him, that has increased Microsoft’s stock market value at an even faster annual rate than Cook’s at Apple, in addition to establishing some pillars that seem much more solid than those of long ago: cloud, artificial intelligence, corporate environments, subscription economy. Something that has earned him to become … the second most valuable company in the world. Nadella has done nothing wrong either.

4 trillion and going up

Apple and Microsoft have combined, a combined increase in their market capitalization of just over $ 4 trillion since Cook and Nadella took the reins. To get an idea, Only that increase is the sum of the total value of Amazon, Facebook, Tesla and VISA together. In all its history.

Nadella and Cook’s increased value at Microsoft and Apple equals the total value of Amazon, Facebook, Tesla and VISA combined

The comparison is not quite fair: the rise of the entire technology industry has been much higher in this last decade than in the previous one, let alone the eighties or nineties, where it was practically started from zero and the capillarity of technology it was several magnitudes lower.

Said that, something yes we can compare. In the upper graph we have the time each CEO of a selection of large technology companies has held the position. At his side, the increase achieved in the market capitalization (the value of each company) and the average, in billions of dollars, in which that figure grew during each year as CEO. In some cases (such as Facebook or Amazon) the position of CEO was held long before, but the date marks the moment of the IPO of each company, when there begins to be a market capitalization that marks the target value of each one.

Cook and Nadella long take the podium for the biggest gains, although Bezos and Pichai are close behind. Especially noteworthy is the case of the CEO of Alphabet, which surpasses Cook in the ranking if we look at who achieved the highest average annual increase in valuation. Nadella is the one who leads that podium, growing Microsoft at a rate higher than any other. And he has just released something as sweet for the business sector as Windows in the cloud. Rocket emoji.

At the nadir, Ballmer. The charismatic ex-CEO of Microsoft left office having achieved an increase of “only” 23,000 million dollars in the capitalization of Microsoft, at a rate of less than 2,000 million annually. Figures far far below their counterparts in what many analysts call “Microsoft’s lost decade”. Especially meritorious the work of Satya Nadella, who received a much more poisoned inheritance than that received by Cook when Jobs gave him the stick of command.