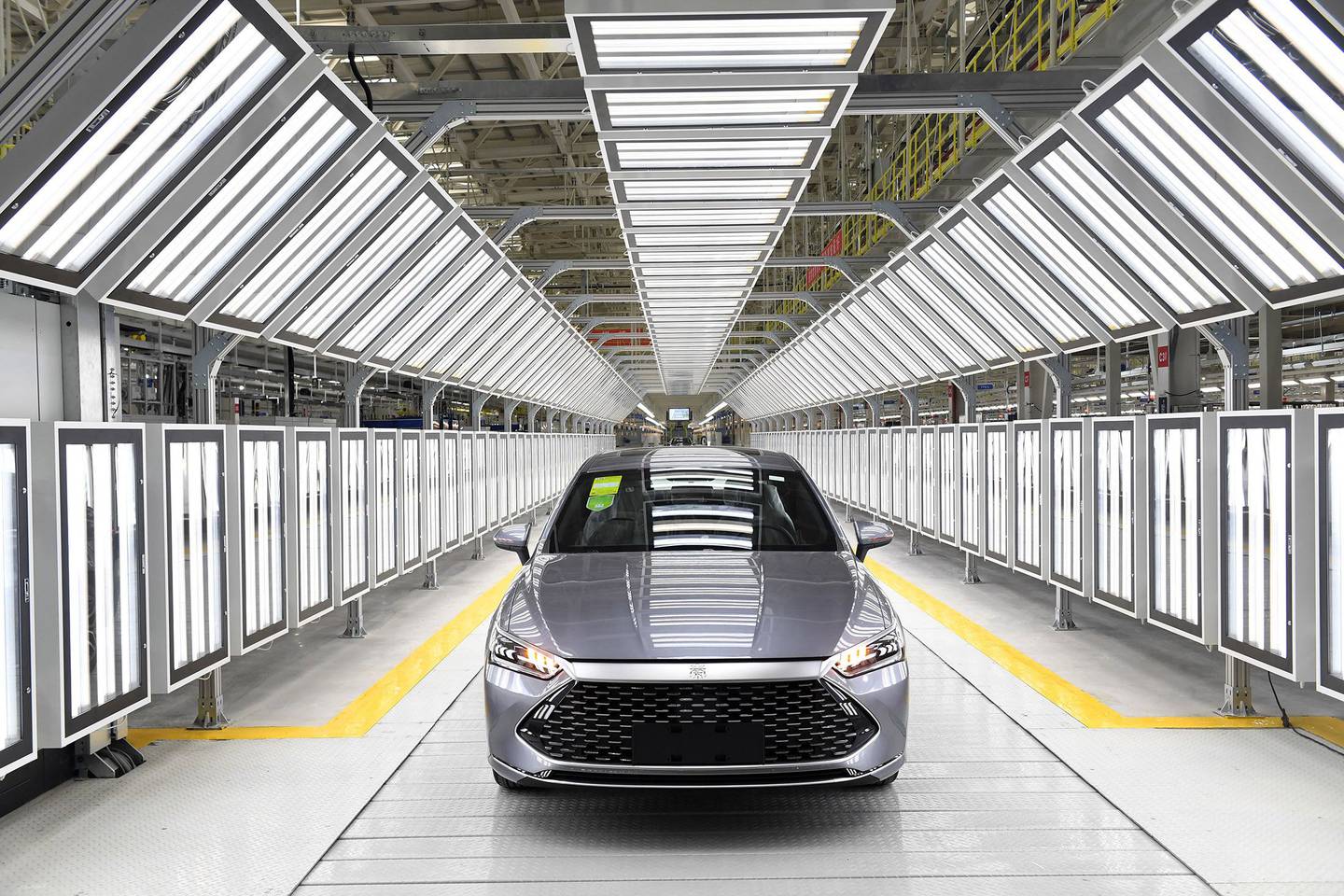 When high school teacher PK Saxena moved in January from the city of Adelaide in South Australia to the small town of Booleroo Centre, he was forced to commute some 75 kilometers to and from his new school in rural Ororo every day. So decided to switch to an electric car due to the cost of gasoline.

First thought of the cheapest electric vehicle in Tesla Inc., the Model 3but decided on an Atto 3 of a new player in the local market: the Chinese automaker BYD Co. Although she is little known in Australia, she is a giant in her homeland, where has been manufacturing vehicles for two decades. Saxena expects to receive the BYD from him for which he paid $33,000, two-thirds of the cost of Tesla’s Model 3.

“It’s ideal, it’s not as expensive as some cars with more range, but it gets me where I want to go,” he says.

Tesla and its messianic CEO, Elon Musk, have captured the attention of investors and drivers around the world with a vision of the future of electric mobility. But BYD founder and CEO Wang Chuanfuyou are racing to transform your company (which is already the main manufacturer of electric vehicles in the competitive Chinese market) into a major global player in electrified transportation by taking a very different approach. If it can expand internationally, it could achieve a level of recognition and scale few Chinese automakers have seen.

In many ways, BYD is the anti-Tesla. Musk started out selling luxury sedans that could go up to six figures, but Wang focused from the start on developing affordable cars within the reach of middle-class Chinese drivers.. Unlike Tesla, which has yet to launch an electric bus and has struggled with trucks, BYD has a diversified line of plug-in products that includes trucks, forklifts and buses. And while Musk hates unions, Wang has a unionized workforce at his factory in Lancaster, California, which mainly produces buses for the US market.

Their relationship with the authorities of their countries of origin is also different: Musk has traded criticism with President Joe Biden; Wang, instead, received Chinese Prime Minister Li Keqiang on August 17, who toured BYD’s headquarters and promised to continue supporting the electric car market.

However, BYD’s embrace of vertical integration could be the biggest difference, and perhaps an advantage, over Tesla and traditional automakers just entering the electric space. BYD not only manufactures vehicles but also its own semiconductors and batteries. Today it is the third largest manufacturer of batteries for electric vehicles (EV), with 14 percent of the global market, behind its Chinese rival. Contemporary Amperex Technology Co. Ltd., and South Korea’s LG Energy Solution Ltd. BYD’s battery customers include Toyota Motor Corp., and it also appears to sell batteries to Tesla.

Faced with a shortage of lithium, a critical material in batteries, Wang has forged closer ties with producers of the metal. BYD Vice Chairman Lv Xiang-yang is also a director of Youngy Co., a lithium processor that announced in June that a subsidiary had won a major order from BYD. In March, BYD agreed to invest up to $442 million in Chengxin Lithium Group Co.., a supplier with projects in the Chinese province of Sichuan, as well as in Argentina and Indonesia.

“BYD is the most vertically integrated company I’ve ever seen, not just in the automotive space,” says Taylor Ogan, head of Snow Bull Capital, a hedge fund focused on green technology that owns stakes in both BYD and Tesla. “BYD already does almost everything that Tesla is trying to do and much more.”

The idea of produce well-equipped but relatively inexpensive electric vehicles for the masses is not new. Musk made headlines in 2018 when he said Tesla would launch a $25,000 car by 2021. That never caught on, and Musk repeated the promise in 2020, with a new deadline of 2023. But in January of this year, Musk told investors that the company was too busy with other projects to deal with a cheap car for the masses. Currently, the lowest-priced Tesla costs $46,990 in the US and 280,000 yuan once government subsidies are applied in China, its two biggest markets. By comparison, BYD’s cheapest EV is around 96 thousand yuan with subsidy.

Australia is just one of the countries where Wang sees opportunities to replicate his company’s successful mass-market strategy. BYD accounts for about 26 percent of new energy vehicle sales in China, well above Tesla’s 11 percent, according to Citigroup. BYD has already started selling its Han electric sedan in Brazilforged deals with partners to open dealerships in Australia and New Zealand, and recently revealed plans to enter several countries, including Germany, Israel and Thailand.

Wang’s bet is that the expansion will give BYD a head start as the world transitions to electric cars. Outside of Tesla, most major automakers are still in the early stages of launching their electric cars. For BYD, that means “they have an opportunity to take hold and build a certain level of scale,” says Ben Selwyn, director of consultancy ACA Research. “There are not too many brands with competitive products at competitive prices.”

Wang’s strategy is working; BYD is already the third most valuable automaker in the world (after Tesla and Toyota) with a market capitalization of about 127.5 billion dollars). In April he reported that he had stopped making gasoline cars, and so far this year has sold 800,000 new-energy passenger vehicles, more than in all of 2021.

BYD’s self-sufficiency has also helped it avoid some of the supply chain problems that have plagued other Chinese automakers, says Kelvin Lau, an analyst at Daiwa Capital Markets. Over the past 12 months, “perhaps only BYD posted very consistent sales increases, while others have been intermittently affected by chip supply.” Wang is even considering selling in Japan, where Toyota and other big players won’t have many electric vehicles available for several years and are more exposed to the vagaries of supply chains. That is an opportunity for BYD, which can rely on its own batteries, “it is our main advantage”, says Atsuki Tofukuji, head of BYD Auto Japan Inc.

The question is how long that advantage can last. Industry heavyweights like Toyota can’t compete with BYD’s electric cars for now.

But given the economies of scale that Japanese automakers enjoy, they are likely to catch up quickly when they are ready to push electric vehicles globally in a few years, warns Kota Yuzawa, head of Asia sector research at Goldman Sachs. Group Inc.

Pursuing vertical integration by investing in overseas lithium production, where governments may not be as friendly to BYD as the Chinese, is also risky. BYD learned that lesson in June, when Chile’s Supreme Court nullified a government contract that BYD had won in January to produce lithium over there. “It’s going to be really challenging to crystallize projects and get them to produce consistently,” says Caitlin Purdy, co-author of several recent Brookings Institution reports on lithium mining.

Still, the big question for Wang right now is what legendary investor Warren Buffett is up to. The $230 million of BYD shares that Berkshire Hathaway Inc. bought in 2008 have turned into a stake now worth about $8 billion. In mid-July, a position in BYD the same size as Berkshire’s appeared on the Hong Kong stock exchange’s clearing system.

Traders often view these moves as precursors to a sale, because the shares must enter the system before the trades can be settled. Berkshire Hathaway did not respond to requests for comment.

The prospect of Buffett dumping his stake has highlighted another BYD weakness: the company’s meager profit margins. Profits represented less than 2 percent of revenue in 2021 versus 10 percent for Tesla. That’s partly because BYD is so focused on mass-market cars. Its newest model, an SUV called the Yuan Plus, sold as the Atto 3 in foreign markets, costs just 137,800 yuan after subsidies. Its closest Tesla competitor, the Model Y, costs 316,900 yuan.

BYD prioritizes international growth over profitability in the short term, says Steve Man, a senior analyst at Bloomberg Intelligence in Hong Kong. “That’s the strategy: try to get in the door and build even bigger scale,” he adds. “They have their eyes set beyond China.”

Back at Booleroo Centre, Maestro Saxena is eager to get behind the wheel of his BYD, although he admits he’s taking a risk. “I’m not concerned with the quality of the engineering as such, but with how much they know about markets outside of China and what consumers want,” he says. “That is a huge leap of faith.” As is Wang’s plan to get into tesla rail.