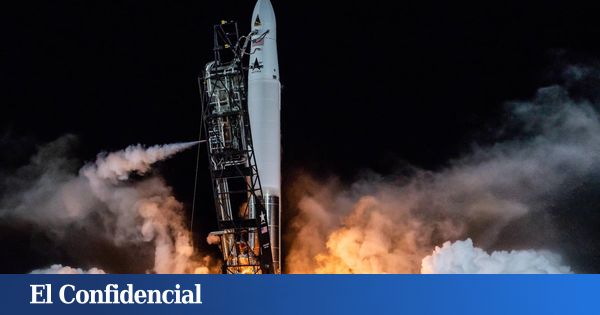 The rocket LV0007 of the aerospace company Astra has managed to reach Earth’s orbit just 5 years after its foundation. It took Musk more than six years to get it and the billionaire Bezos is still trying. But they are not the only ones, a rocket from Rocket Labs, a Californian startup, also did it last week.

Musk and his SpaceX are no longer alone as the only ones capable of flying above the Karman line – what the International Aeronautical Federation considers the boundary between atmosphere and space and which is located 100 km from the earth’s surface.

Astra, A Californian company that since 2016 has launched several rockets and has successfully reached space, has managed to overcome it as well. This Saturday, November 20, your LV0007 model took off from the company’s spaceport on Kodiak Island, Alaska, and reached a height of 500 km carrying a test payload for the US Space Force

Astra just reached orbit! 7.61km/sec at our targeted 86.0 degree inclination at an altitude of 500km. The team worked hard for this. We’re just getting started, folks. #AdAstra pic.twitter.com/NiMhCEsuCI

The LV0007 is a small two-stage disposable rocket designed for the transporting satellites to space and that it can carry within its fairing a weight of up to half a ton. Astra already tried a similar launch in August this year, without much success. One of its five engines shut down within a second of takeoff and the company aborted the mission after two and a half minutes.

“The team has worked very hard on this for many years,” commented Astra’s CEO, Chris Kemp during a live broadcast after launch. “We have rockets number eight, nine and ten in production, so we are just getting started.”

In addition to Astra, the ‘startup’ Rocket Lab last week put two satellites in orbit getting a height of 430 kilometers. It did so with its Electron rocket, which is 15 meters high and can carry payloads of up to 227 kg, less than half that of the LV0007.

Like the Astra rocket, it also has two stages, although the first one can be recovered. Electron ‘boosters’ that fall to Earth are collected with a helicopter, they are inspected, their thrusters are overhauled, and they are brought into the shuttle ready for take off again. This reuse, as with SpaceX rockets, would reduce costs for Rocket Lab and its customers and allow the company to significantly increase its launch rate.

No one overshadows Elon Musk

These Astra and Rocket Lab successes stand in stark contrast to recent failures of the giants of aerospace aviation. We recently told in Novaceno how NASA has had to use SpaceX to take its astronauts to the International Space Station after Boeing will delay the departure of his Starliner for the umpteenth time due to security problems.

Another giant Lockheed Martin, He also has security problems with his Orion spacecraft, the spacecraft that, within NASA’s Artemis program, will take us to the orbit of the Moon.

As for the rest of the private companies that own their own rockets, Blue Origin He has not yet overcome the tantrum of the sentence that left them out of the contest to build the NASA ‘lander’ that will take the human being to the Moon again. Although his latest releases have been making headlines, the efforts of Jeff Bezos’ company are still an expensive public relations campaign paid for by everyone. Amazon employees.

Not only are they unable to get their spacecraft into orbit, but their own employees have criticized the company’s toxic environment and the lack of security of its technology. What’s more, its brightest engineers are starting to jump ship. Bad signal.

Virgin Orbit, the company of billionaire Richard Branson, after two unsuccessful attempts recently succeeded with its mission ‘Tubular Bells: Part 1’ to carry two small satellites 500 kilometers from the Earth’s surface. The method they use is not the usual one. A Boeing 747 loads the LauncherOne orbital plane under its wing and releases it when it has reached a sufficient height. Then the LauncherOne’s engines turn on and the ship climbs to the height where it has to drop the satellites.

Virgin Orbit has an ambitious launch schedule planned for next year. “As we move into the next year we will hit the gas pedal on our production team primarily to get a faster pace and grow at least twice that. [ritmo de lanzamiento] at 23, “CEO Dan Hart told Space.com.

Both Virgin Orbit and Astra or Rocket Lab are far from the power that SpaceX shows and the trust that its customers put in their space travel. Even so, not everything is decided, there is more and more competition and we will be attentive to see how this competition between private companies evolves to take over dominance of commercial space traffic.