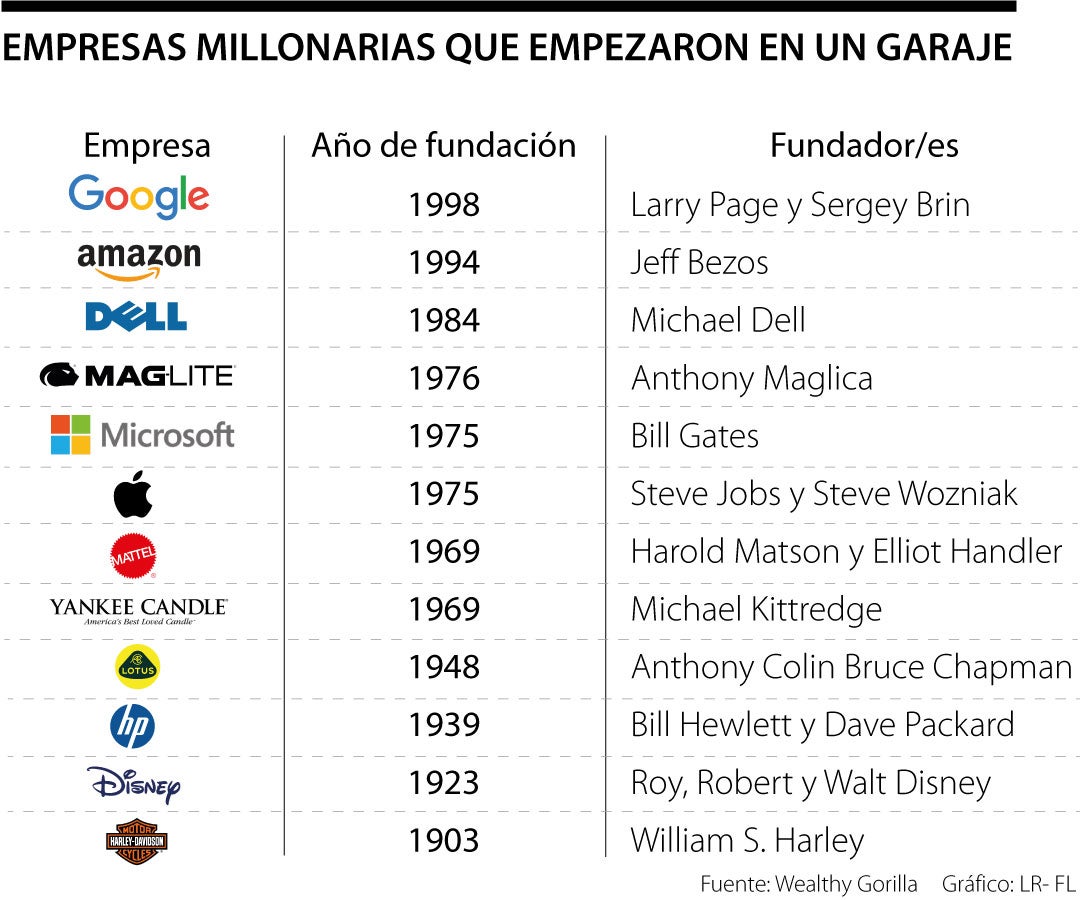 It will suffice to know the history of companies that currently invoice in several digits to demystify the idea that creating a company requires enormous capital. Many of them, in fact, have as a common denominator the ability to launch an innovative proposal, even if this implies maturing it from the start. garage or the living room of their houses.

Large companies like Google, Amazon or Microsoft are proof that the phrase taught in some faculties is true: a great idea, no matter how revolutionary, is worth nothing if it is not executed. And for this you do not need a great fortune, but the ability to execute them.

Here are some examples of multi-million dollar businesses that started from their home “garage” and are now turning over billions of dollars. It is important to note that in some of the cases, the garage term is not only reduced to its tangible and real meaning, but can also be an analogy to show that they started from scratch.

In 1998, Larry Page and Sergey Brin created, out of their college dorm room, a search engine that used links to determine the importance of individual pages on the World Wide Web. They called this one Backrub. Months later they changed the name to Google.

According to their own information, “they were inspired by a mathematical expression (the number 1 followed by 100 zeros) that perfectly reflected Larry and Sergey’s mission to organize the world’s information so that it is accessible and useful to everyone.”

In August 1998, Sun co-founder Andy Bechtolsheim gave them a check for $100,000, and that was the official birth of Google Inc. With that, they moved from their bedroom to a garage in California, rented to them by Susan Wojcicki. After more than 24 years of trial and error, Google is now a company with a worth estimated US$350 billion and its founders are among the richest people in the world.

It was founded by Jeff Bezos in 1994 and operated as a small online bookstore that he ran from the garage of his home in Bellevue, Washington. Its initial capital barely exceeded US$10,000, but less than a month after its launch it was already selling in all states and in 45 other countries. After a year, it already accumulated 2,000 daily visitors and in 1997 it had its IPO.

Michael Dell is one of the entrepreneurs who saw entrepreneurship as a way out other than forging himself as a medical professional. He began building custom computers to order in 1984 from the garage of his home. A year after dropping out of college to run his business, she moved north to Austin to maximize his profits, right out of his own office.

In 1999, Dell overtook Compaq to become the largest seller of personal computers in the United States with revenues of $25 million reported in January 2000. Today, it remains one of the strongest competitors in the market.

Its founder, Anthony Maglica, began working in 1950 on what would become his life project with only US$125 of his savings. However, 14 years later, he incorporated as Mag Instrument, where he would deliver the individual components needed for flashlights to flashlight manufacturers.

This decision was reconsidered when he imagined that he could end up manufacturing better quality flashlights than those that his clients were creating with his components. This is how it began to market them under the MagLite brand in 1976. Now it is the leading company in the market for these products.

When Bill Gates and Paul Allen founded Microsoft in 1975, they came up with a space in Gates’ garage where they began licensing the first operating system, which at the time was $80,000.

Gates, who was the businessman, sold the programming language, Basic, to the Altair company in exchange for 50% of the sales. Some time later, he sold the MS DOS programming language to IBM, and later they moved on to more advanced software projects, which led to the birth of Windows.

This company was founded by Steve Jobs and Steve Wozniak in 1976. In that year they created one of the first laptops, the “Apple 1”, but not before having several frustrated attempts that even forced Jobs to sell his truck and Wozniak to leave your programmable calculator. His first sale was 50 units to a distributor of retail.

It was the empire of plastic and metal that in 1945 modernized the toy industry in the world. This is how the creations of Harold Matson and Elliot Handler turned a field that was still anchored to ancient times. Mattel was founded to manufacture gifts and toys, among which they developed the iconic Barbie and later her partner Ken, who were named after Handler’s children.

Mike Kittredge, only 16 years old, was looking for a gift for his mother. He wanted something made for him, so he thought of breaking several colored crayons to make a candle and have the perfect gift he was looking for. The result was so successful that he began receiving orders from neighbors and the company grew to the point where he sold it in 1999. Today, the company sells approximately 200 million candles annually.

As a car company could not be missing, this company was founded by Anthony Colin Bruce Chapman in 1948, who actually began by building his first Lotus car in a stable next to ‘The Railway Hotel’ in Hornsey, London, with the purpose of having an all-terrain vehicle.

The company was founded in 1939 by William Hewlett and David Packard, colleagues at Stanford University, who in a garage developed the first audio oscillator. Since then, what started out as a small tech club called ‘Silicon Valley’ has grown into one of the biggest computer companies.

Both partners only had US$538 to invest, however, it later became a company dedicated to manufacturing and marketing hardware and software as well as providing computer-related support services.

It was founded in 1923 by Walt Disney and his brother, Roy O. Disney, and is the second largest entertainment company in the world, after Comcast. According to his story, the company began filming ‘Alice in Wonderland’ comedies in his Uncle Robert’s garage in that year. The success of his films has been such that today, among other lines of business, he has his own streaming content platform.

William S. Harley would be the creator of a legendary motorcycle brand that was born in 1903. What began with the invention of a bicycle with a small engine resulted in a novel motorcycle with a wooden shed. In the first year they managed to build three motorcycles but its innovative technology and distinctive design made it one of the most iconic brands in the world.